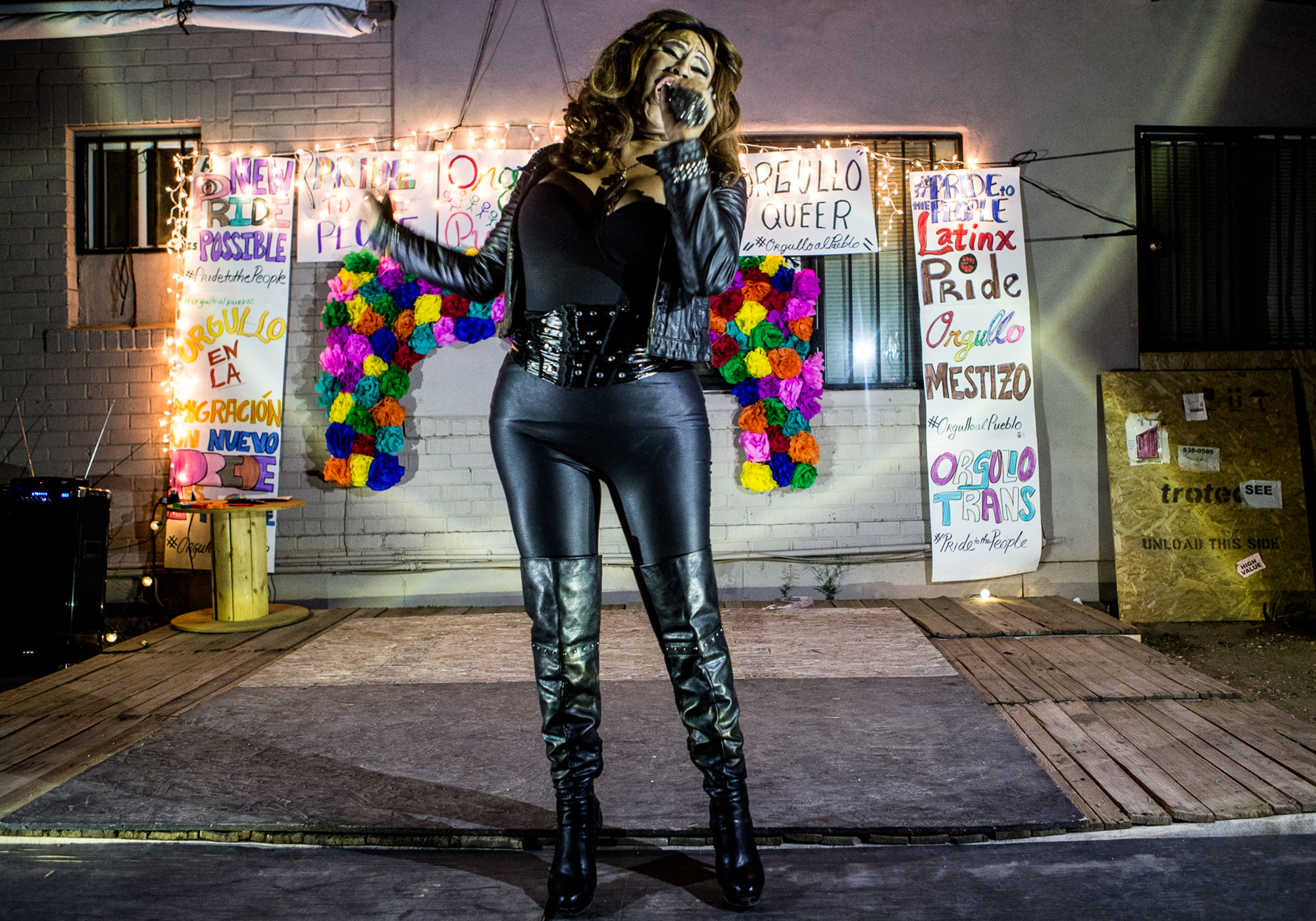 PHOENIX – With the Phoenix Pride Festival and Parade just one day away, organizers and members of Trans Queer Pueblo, a community organization providing political, economic and social services to undocumented LGBT people of color, have wrapped up a week of action leading up to Sunday’s events.

It included a vigil Monday evening outside the privately run Eloy Detention Center in memory of the detainees who have died since 2003 from suicide or medical neglect. They also wanted to bring the LGBT pride festivities to LGBT people now held in what is considered the deadliest immigration detention center in the United States.

That night, as the sky darkened, the figures of those detainees could be seen through the thick windows, their bodies pressed against the walls that hold them. As drag queens performed across the street and organizers chanted the names of the 15 people who have died while in Eloy, there were moments of silence broken by the thumping and cheering within the center.

“Even though people in detention can not attend the pride parade, we are going to go and celebrate with them. We are going to raise their name and let them know that we are there supporting them,” said Dago Bailon, a volunteer and organizer with Trans Queer Pueblo.

The vigil outside the detention center was part of the organization’s week of LGBTQ Justice, prompted by what members consider a lack of representation of black and brown LGBTQ people during past Phoenix Pride celebrations. 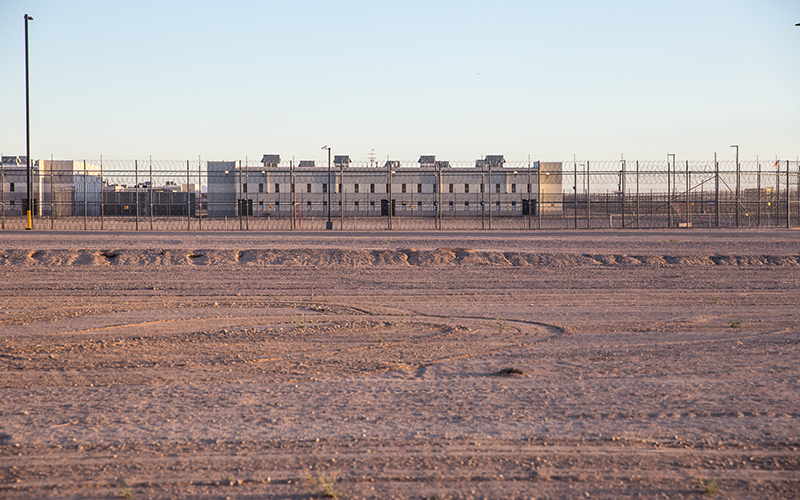 Fifteen people have died in Eloy Detention Center since 2003, making it the deadliest immigration detention center in the United States. (Photo by Lerman Montoya/Cronkite News) 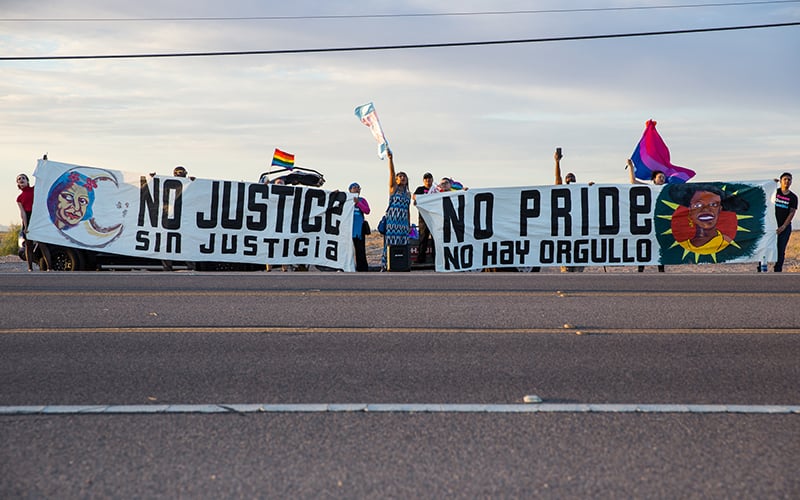 Karyna Jaramillo leads the chanting while waving the transgender pride flag at the Trans Queer Pueblo Vigil for Liberation across the street from the Eloy Detention Center, which is run under contract with U.S. Immigration and Customs Enforcement. (Photo by Lerman Montoya/Cronkite News)

Last year, a group of activists from TQP, Black Lives Matter PHX Metro, along with other organizations, disrupted the Phoenix Pride Parade, voicing their demands and grievances against the festival and its organizers.

According to Rafael Gabriel Esquer, a student at Arizona State University and member of TQP, they have felt excluded.

“The Pride festival doesn’t listen to our demands and our concerns as LGBT people of color. They continue to uphold the status quo and disregard how negatively impactful it is for our communities of color,” he said.

Jeremy Helfgot, a spokesperson for Phoenix Pride, said he believes the event is inclusive and allows anyone interested in participating to do so.

“Pride, historically, has always been driven by inclusion and continues to be. There is a steadfast commitment for anyone wanting to be involved,” Helfgot said.

However, members of TQP disagree. During last year’s Pride, they held banners and signs that read “Sin Justicia, No Hay Orgullo” “No Justice, No Pride.”

They also expressed frustration at the loss of black and brown LGBT people at the hands, they said, of local law enforcement and in Arizona detention centers.

According to Bailon, a clear divide was made that day between Trans Queer Pueblo and Phoenix Pride.

“After we stopped the parade, we engaged in conversation with the Pride board. There is still a lot of work to be done on Pride’s end to be able to understand why we made the demands,” he said.

One of those demands included removing Bank of America’s sponsorship of Pride because of its connection to the private prisons system.

A report from In the Public Interest, a research and policy center focused on transparency in government contracts, details Bank of America’s ties to CoreCivic, which operates hundreds of private prisons across the country. U.S. Immigration and Customs Enforcement contracts with CoreCivic to operate the Eloy center.

TQP also objected to what it calls the commercialization of Pride and how the history of the LGBT rights movement has been erased from the festival’s message of political activism.

Helfgot said the Pride festival did allow TQP to voice their concerns.

“When they conducted their protest last year, we recognized that Pride’s roots are with the protest movement,” Helfgot said. “We allowed them to carry out their protest … when spectators became agitated, Phoenix Police were there to help TQP protestors.”

However, Bailon and other TQP members still see the presence of police and other law enforcement as inappropriate at the Pride parade.

“Pride allows the police to be there in multiple different ways and for communities of color, that is putting us in danger,” he said. “If we look at statistics, we are the communities that criminalize at a higher rate. We hold this parade and festival so people can say for one day they are standing with the LGBTQ community, and then you have the Police Department and sheriff, the rest of the year hunting us like animals.”

After last year’s encounter, the leadership of Trans Queer Pueblo organized and decided they wanted to start their own version of pride that allowed LGBT people of color a safer space to gather and enjoy pride festivities through cultural expression, music, and activism.

Thus, the idea for Justice Week was born.

“It was important for us to go to Pride and ground ourselves in our history and the legacy of Martha P. Johnson, Sylvia Rivera and Miss Major, and that was by setting a set of demands that Pride. Black and brown communities are not safe at Pride,” Dago Bailon said. (Photo by Lerman Montoya/Cronkite News)

Karyna Jaramillo, who was detained at Eloy Detention Center in 2015, speaks about the injustices she faced there. Jaramillo is a transgender woman but her gender identity was not recognized by CoreCivic and U.S. Immigration and Customs Enforcement officials, so she was housed with the men. (Photo by Lerman Montoya/Cronkite News)

Members of Trans Queer Pueblo said they believe the presence of U.S. Immigration and Customs Enforcement in the county jail has increased deportations. “Penzone has not changed much of the legacy of Arpaio. He’s just a mask for racists, xenophobic, institutions,” Dago Bailon said. (Photo by Lerman Montoya/Cronkite News)

More than a dozen people gather in front of the Fourth Avenue Jail in downtown Phoenix to protest the presence of U.S. Immigration and Customs Enforcement agents in county jails. (Photo by Lerman Montoya/Cronkite News)

“We are going to take the Pride celebration to the institutions that are complicit in the incarceration and deportation of our people,” Bailon said.

The week continued with the vigil for liberation at Eloy Detention Center.

“In a midst of a drag show and chanting, we heard thumping,” Esquer said. “Those thumps, every time I think about them, brings me to tears because those are people who know they will get in trouble, and are desperately in need of hope.”

Karyna Jaramillo, a transgender woman who was detained in Eloy in 2015, now works with TQP as the head of liberation services. She spoke at the vigil and shared her experiences being in the detention center, and the injustices she said she suffered because of CoreCivic and ICE employees.

On Tuesday, a special town hall took place at Friendly House’s Academia del Pueblo Elementary in central Phoenix, where members of TQP, Black Lives Matter PHX Metro and others discussed what a safer Phoenix would look like for LGBT communities of color.

TQP, alongside members of Black Lives Matter PHX Metro, continued to voice their demands and concerns through a protest outside of the Phoenix Police Department to honor those who they said have died at the hands of local law enforcement.

“Penzone has not changed much of the legacy of Arpaio. He’s just a mask for racists, xenophobic, institutions,” Bailon said.

Members of Trans Queer Pueblo said they believe the presence of ICE in the county jail has increased the number of deportations.

A week after winning the race for county Sheriff in 2016, Sheriff Penzone addressed ICE’s presence in Maricopa County jails. During Joe Arpaio’s administration, ICE officials were notified beforehand about a person’s legal status. Upon being released, ICE officials would be waiting outside to transfer the person to an immigration detention center.

As for Sunday’s parade, TQP said they will invite Phoenix Pride Parade and Festival goers to their own version of Pride festivities centered on political activism, celebrating the intersectionality of gender, sexuality and race.