The program teaches student-athletes, parents and coaches about addiction, overdoses and deaths that have ravaged the nation. A pilot program in the Tempe Union High School District addressed the potential for teens to abuse opioids.

Barrow Neurological Institute and the Arizona Interscholastic Association, which oversees high school sports, are among the groups working on a program expansion that would be similar to Barrow Brainbook, an online course on concussions that high school athletes take before practicing or competing. While Barrow Brainbook is mandatory, the opioid education program will be voluntary.

Barrow doctors talked about the complexity of the dilemmas and solutions preventing opioid addiction at a news conference Tuesday.

“We want to make sure we don’t have an all or nothing solution,” said Dr. Javier Cárdenas, sports neurologist and director of the Concussion and Brain Injury Center at Barrow.

He said fighting potential opioid abuse in teens must be balanced with the legitimate use of opioids to battle acute pain.

Two-thirds of parents believe prescription pain medication abuse is a problem among 14- to 18-year-olds and 40 percent worry their children will use the medication recreationally, Dignity Health in Arizona said in a statement about a survey of teens and parents.

Cardenas said teens are more prone to anxiety and depression than adults, making them more at risk to seek opioid-induced euphoria. He also said athletes are prescribed opioids at higher rates than other teens.

“There’s pressure to play through the pain,” Cárdenas said. According to the survey of 313 teens and 201 parents, half of the parents surveyed said they allowed their teenage children to take painkillers for sports injuries.

“There’s the mentality that it’s not working, so take more,” Indermuhle said. According to the survey, she said nearly two in 10 teens strongly agreed it is okay to take more than the recommended dosage if they feel more pain. 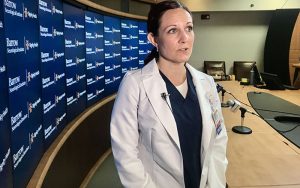 David Hines, AIA executive director, said the program will include videos and pamphlets placed in sports physical packets and parent-player agreements to demonstrate the risks of opioid addiction.

He said they are also working on implementing a treatment plan for student-athletes to make sure they have ample time to recover from using prescribed painkillers before getting back into a game.

Indermuhle said the school program could be a national model. She is working with a Chandler substance treatment task force to prevent addiction, including proper handling and disposing of opioids and using the drugs for acute pain rather than chronic pain.

The doctor said opioids should only be used for three to five days at the most. After the five-day mark the chances of becoming addicted increase.

Indermuhle also said it is important for parents to address the dangers of opioid abuse with their teens and ensure a safe place to talk about those problems.