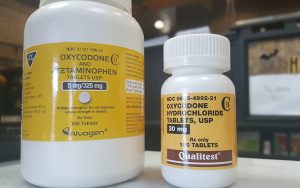 In Arizona last year, 790 people died of an opioid overdose – that’s more than two per day, according to the latest numbers released by the Arizona Department of Health Services. (Photo by Gavin Maxwell/Cronkite News)

“The more word we can get out, the more chance we have to stop this before this starts,” he said. “Anything we can do to drive down the addict population and drive down the demand for these drugs combined with effective law enforcement is always going to help this problem.”

In 2015, there were 33,000 opioid overdose deaths nationwide, according to the Arizona Department of Health Services.

Trump also suggested a large advertising campaign to raise awareness to the epidemic, according to CNN.

“Prevention is the key to the whole thing,” Coleman said. He added that if more people become aware of the dangers of opioids and stay away from the drugs, law enforcement and treatment will become less necessary.

In Arizona last year, 790 people died of an opioid overdose – that’s more than two per day, according to the latest numbers released by the AZDHS. From June 15 to Oct. 19 this year, there have been 3,599 suspected opioid overdoses.

Numbers like these led Gov. Doug Ducey to declare a health emergency on the opioid crisis in June. In a statement Thursday, Ducey praised Trump.

“Far too many families across Arizona and the country know the pain of losing a loved one to opioid abuse,” Ducey said in the statement. “Combating this crisis requires collaboration on all fronts – from local and county officials, to states and the federal government. I applaud President Trump’s efforts today and look forward to working with the administration to save more lives and put an end to this epidemic.”

ADHS has released an Opioid Action Plan designed to reduce opioid use and overdoses in Arizona. In September, Ducey said he wanted to limit doctors to prescribing no more than five days’ worth of opioids for people who haven’t already been on the powerful pain medication.

The proposal was part of the governor’s plan to combat opioid abuse in the state.

“It makes this problem highly visible and that way, patients as well as practitioners can say, ‘Yeah, this is a huge problem and we need to address it,'” Quan said.

He said increased awareness has led practitioners to consider cutting down on the amount and length of time they prescribe these types of medicines.

“Continuing to get the word out is critical,” Brazie said. “So I think that was an important first step today, the announcement, but ultimately treatment for this does cost money and it would be great for the government to really look at making sure there is appropriate funding for people to receive (medication assisted treatment).”

Coleman said solving the crisis won’t be easy and there are many steps that need to be taken – from public awareness to retraining doctors. He said because of the high number of people who die from overdose, the epidemic is the worst drug-related crisis he has seen in 30 years.

“This is a long-term problem. We’re not solving this overnight,” Coleman said. “It took us 20 years to get into this mess. It’s going to take a long time to get out of it.”