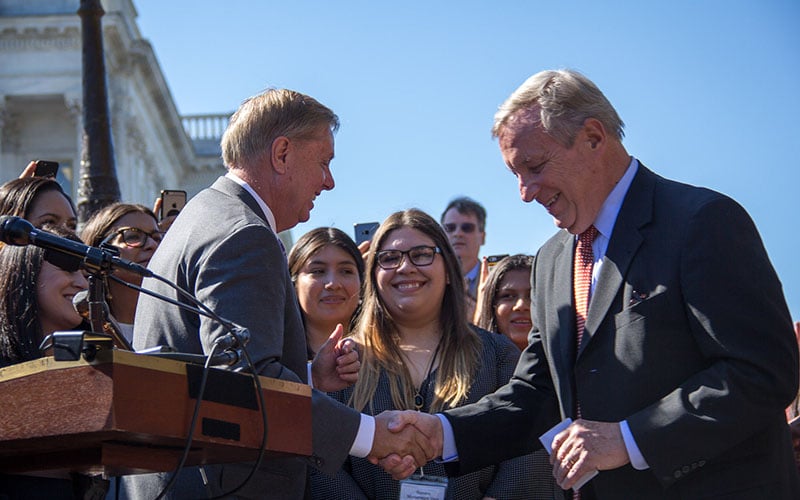 Sen. Lindsey Graham, R-South Carolina, left, and Sen. Dick Durbin, D-Illinois, the lead sponsors of the Dream Act of 2017, said at a rally outside the Capitol that they’re optimistic about the bill’s chances for success this year, after years of trying. (Photo by Adrienne St. Clair/Cronkite News) 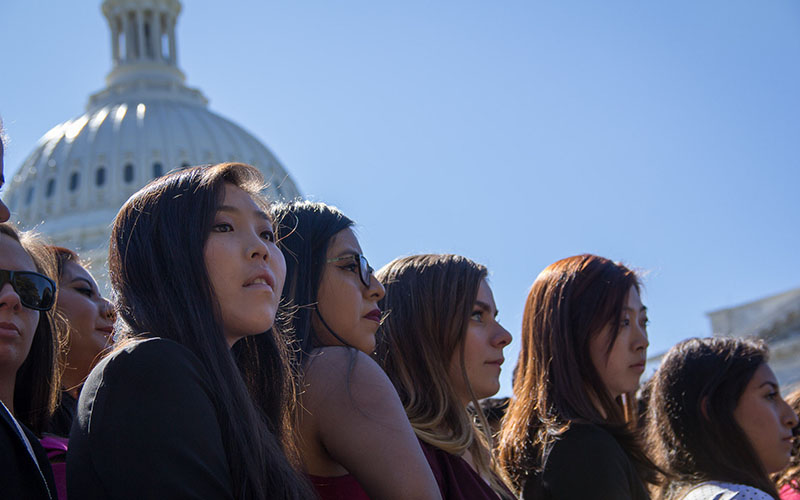 DACA recipients gather outside the Capitol to hear from lawmakers working to pass the Dream Act. If passed, the bill’s provisions would enact into law many of the protections of the DACA program, which is scheduled to expire in March. (Photo by Adrienne St. Clair/Cronkite News) 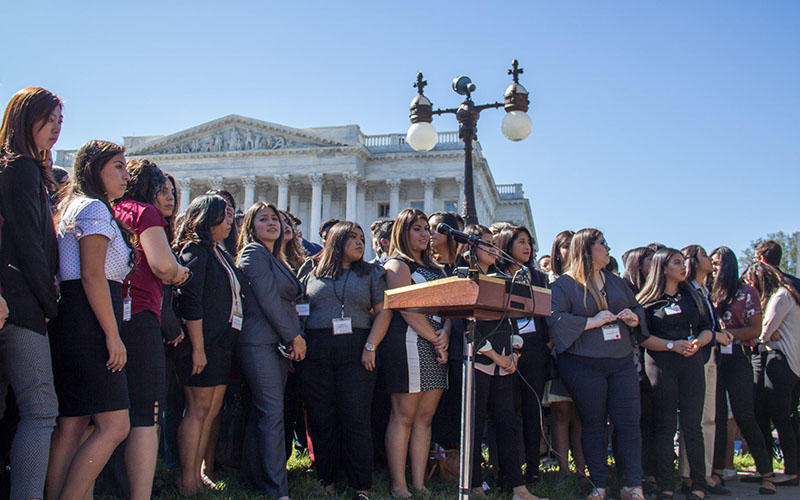 Among the scores of DACA recipients who turned out for “DREAMer Advocacy Day” at the Capitol were four from Arizona. DACA, the Deferred Action for Childhood Arrivals program, protects about 800,000 immigrants from deportation for two years at a time. (Photo by Adrienne St. Clair/Cronkite News) 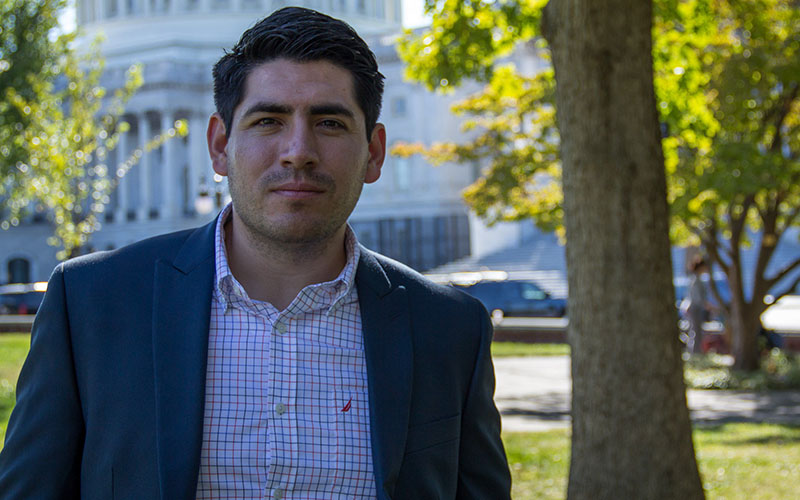 Jose Patino, a DREAMer from Gilbert, was in Washington for the rally. Despite the optimism of lawmakers that the Dream Act could pass this year, Patino said he worries that the debated will devolve into talk but no action, as it has in the past. (Photo by Adrienne St. Clair/Cronkite News)

WASHINGTON – Senate sponsors of the latest Dream Act assured over 100 young immigrants Wednesday that “the nation is poised to do the right thing” and protect them after the DACA program expires next year.

The comments came at a “DREAMer Advocacy Day” event at the Capitol where DACA recipients from across the country, dressed in their professional best, heard from Sens. Lindsey Graham, R-South Carolina, and Dick Durbin, D-Illinois, co-sponsors of the perennial bill.

“I’ve never seen the stars align like they are today,” said Graham, adding that he has “never felt better” about the chances for passing the measure.

“Let me tell you why I feel most hopeful this time,” Graham told the attentive crowd. “The president I think has the right attitude about solving this problem. He ran a very difficult and tough campaign on immigration. When he speaks, I think people in the House on my side of the aisle are going to listen.”

The Dream Act has been around in some form or another since 2001, but it is particularly pressing this year because many of the provisions of the bill would permanently establish elements of the Deferred Action for Childhood Arrivals.

That program was put in place by President Barack Obama with a 2012 executive order, after Congress failed to enact comprehensive immigration reform.

The DACA program applies to immigrants who were brought to this country illegally as minors. It does not change their immigration status, but protects those immigrants from deportation if they meet a number of criteria – including age limits, a clean criminal record and a job or schooling – and gives them work authorization.

Roughly 800,000 people received DACA protection, which lasts for two years but can be renewed.

Critics called the program an executive overreach, and the Trump administration announced last month that it would “wind down” DACA over the six months.

Current recipients whose coverage is expiring have until Thursday to apply for renewal. Congress has until March 5 to act, at which point the program will end and coverage will lapse, putting the recipients at risk of deportation.

Graham on Wednesday called Durbin, who has been involved with the Dream Act since 2001, the “grandfather” of efforts to find a solution to the plight of the immigrants who were brought to the United States illegally as children.

The senators’ optimism cheered members of the crowd, which included four DACA recipients from Arizona who said they are hopeful – but with some hesitation.

Maxima Guerrero, 27, who has been actively involved in advocating for the DREAM Act since 2010, said she’s seeing more bipartisan efforts than she saw previously, but she is still worried about what bipartisan negotiations look like.

“What will come at the expense of my pathway to legalization?” the Mesa resident asked, adding concerns about more border enforcement or the ever-present talk of a wall.

Those concerns aren’t unfounded: Even as they said details of the bill still have to be negotiated, Graham said, “Bottom line is, we’ve got to do a border security solution,” while Durbin promised he’s “not going to stop with DREAMers,” but push for comprehensive immigration reform.

“We want to make sure that America remembers its legacy, this nation of immigrants,” Durbin said.

Tucson resident Cynthia Magallanes, 32, said she has dealt with the “broken” immigration system for years, and worries that she will be separated from her three kids and naturalized husband if the legislation doesn’t pass. “(It) is so complicated,” she said.

Jose Patino from Gilbert said after the event that not only are lawmakers not moving fast enough, “my concern is that legislators are not moving at all.”

Patino, 28, who works as a campaign director for advocacy group Aliento, said Republican support is essential, especially from the Arizona Republicans.

“Jeff Flake is already a co-sponsor, we’re trying to get John McCain to be that champion as well,” he said of Arizona’s two senators.

He fears “gridlock,” with a lot of talk and no action, like has happened in the past.

Durbin said “we need to build up our numbers” and get eight more Republicans and all Democrats to support the Dream Act in order for it to pass in the Senate, but he is still optimistic.

“The good news is we are in dialogue,” he said. “We are talking about it.”

But the lawmakers are mindful that they face a hard deadline.

“The March 5th deadline is going to make us act,” Graham said. “Failure is not an option.”