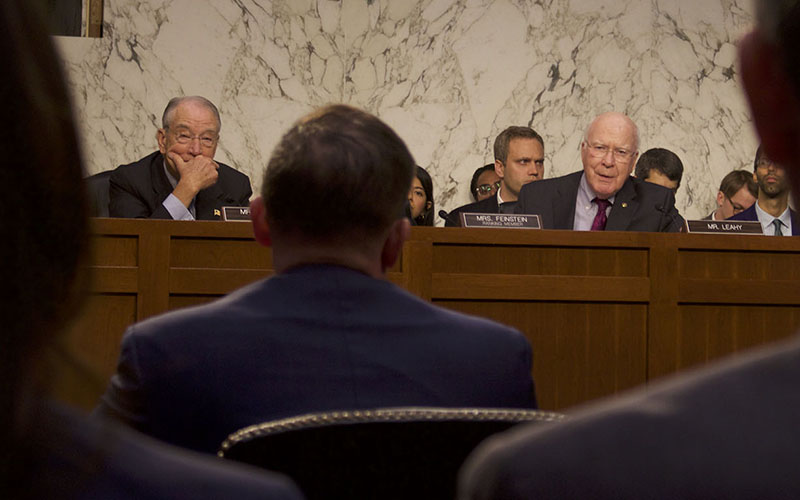 Sen. Charles Grassley, R-Iowa, left, and Sen. Patrick Leahy, D-Vermont, listen to Trump administration officials at a Judiciary Committee hearing where senators grappled with how to proceed on the DACA program, which could leave 800,000 immigrants open to deportation when it expires in March. (Photo by Andrew Nicla/Cronkite News)

WASHINGTON – Senators agreed Tuesday that a legislative fix will be needed to protect DACA recipients, but differed over how far it should go and how to get there with just five months until the current program expires.

The comments came in a Senate Judiciary Committee oversight hearing on the Trump administration’s plan to eliminate Deferred Action for Childhood Arrivals, an Obama-era program that lets some immigrants defer deportation if they were brought here illegally as children.

When he announced plans last month to rescind the program, President Donald Trump said it would be up to Congress to find a way to protect the roughly 800,000 immigrants now protected by DACA, before the program expires March 5.

Sen. John Cornyn, R-Texas, said Tuesday that a legislative fix is the right thing to do, but insisted that before Congress takes any action to replace DACA it must show the public it is serious about securing the border and enforcing immigration laws.

Pointing to Congress’s failure to pass comprehensive immigration reform, Cornyn said lawmakers should take an “intermittent” approach, by dealing with border security and enforcement measures first before turning attention to a replacement for DACA.

But others on the committee said there’s not enough time for that pace and said Congress should make fixing DACA one of its top priorities.

“These young people have put their trust in the federal government and they have done everything asked of them,” Sen. Dianne Feinstein, D-California, said of DACA recipients. “They are counting on us to put aside partisanship and find a solution to this problem.”

Committee members from both sides of the aisle asked a panel of administration officials what would happen to the young immigrants, also known as DREAMers, if Congress fails to act.

James McCament, acting director of U.S. Citizenship and Immigration Services, repeated assurances that information collected on DREAMers in their DACA applications will not be shared with immigration officials for enforcement proceedings.

Michael Dougherty, assistant Homeland Security secretary for border immigration and trade policy, said DHS has not been told to go after DREAMers, whom he said are a benefit to the country and a “valuable contribution to society.”

But he also said that if Congress fails to act before the program expires, DACA recipients “not under deferred action any more, the removal is not deferred and they’re no longer eligible for employment.”

In the weeks since the president’s announcement, the question on how to proceed on DACA has already taken several turns.

Some House Democrats said in early September that they would hold the federal budget hostage if there is not a vote on a “clean” DREAM Act – the bill that would replace DACA – before Dec. 15. That’s the date the current budget expires and delaying a budget vote could run the risk of shutting down government.

Just days later after the House Democrats threat, Senate Minority Leader Chuck Schumer and House Minority Leader Nancy Pelosi emerged from a dinner at the White House saying they had an agreement with Trump to get a DACA replacement bill in exchange for funds for border security – but no border wall for now.

Trump quickly took to Twitter to say there were discussions, but no formal deal, and House Speaker Paul Ryan added that no DACA deal would be made until Congress first fixed the problem of border security and immigration enforcement.

Ryan has since named a 10-member Republican task force, including Rep. Martha McSally, R-Tucson, to draft a GOP-friendly DACA bill, the same day that Republican senators unveiled the SUCCEED Act, which provides a path to citizenship, but does not allow chain migration.

Sen. Charles Grassley, R-Iowa, said Tuesday that he would be willing to consider a replacement bill that does not include funding for a border wall, as some have insisted. But Grassley also said that such a bill would have to include other measures, such as e-Verify and more immigration officers in the interior, to win GOP support.

Rep. Raul Grijalva, D-Tucson, one of the Democrats who threatened to hold up the budget in December to get a vote on a clean DACA replacement, said Tuesday he was “gratified” by Grassley’s comments on wall funding. But he warned that Democrats would still push back against a DACA bill if it was “held hostage” by unrealistic enforcement demands.

If the GOP presents a bill that is “corrupted, tainted or held hostage by demands of enforcement that are not realistic or needed, like a wall, like 10,000 enforcement agents in the interior of the United States, then I think it’s going to be very difficult” to agree to it, Grijalva said.

A frustrated Sen. Thom Tillis, R-North Carolina, meanwhile, said in Tuesday’s hearing on DACA that lawmakers need to “stop talking about it and solve it.”

“Because of Congress’ inaction, the appropriate action by the prior administration and the current action of this administration, that’s put them in an, I think, an untenable position and I think it should be on us to try and make this as smooth as possible as we go about doing our jobs,” Tillis said.