Jazmin Nuñez volunteers at the Phoenix LUCHA office and said the fight is not over yet. (Photo by Angelica Cabral/Cronkite News).

PHOENIX – Jazmin Nuñez was born in the United States, and therefore is a citizen — but her sister is not. That’s why for the past month, Nuñez has worked hard to help people do what her own sister can’t: renew their DACA status.

Nuñez has been volunteering with Living United for Change in Arizona, a local Latinx activist organization. She has been involved with their efforts to help those who are eligible for DACA renewal complete the process before the deadline given by the Trump administration: Thursday, Oct. 5.

“They call ‘DACAmented’ people Dreamers. It’s kind of like people are thinking ‘oh my dreams are dying’ but in reality you can’t really kill a dream, you have to keep fighting,” Nuñez said. “For those who don’t have DACA and who are citizens, we have to have empathy for those who came at such a young age and their whole life is here.”

People in LUCHA may have an ally in Phoenix Mayor Greg Stanton, who along with other members of the Phoenix City Council, sent a letter to the U.S. Department of Homeland Security asking for a deadline extension to DACA renewals. In the letter, they wrote rescinding DACA would cost Arizona’s economy $1.3 billion a year.

In addition, Stanton donated $10,000 from his campaign fund to help cover the cost of DACA renewals, which are $500 each.

Nuñez said over the past month, one story in particular has impacted her. A single mom whose renewal fee LUCHA was able to pay and whose children she met.

“It’s been a really great experience,” she said. “You see a stranger and you don’t really know them and then they start telling you their story.”

In regard to her own family, she said her sister plans on continuing to work.

“(Her family) like to say that leaving isn’t an option,” Nuñez said. “They say we’re not leaving until they get kicked out.”

Daniela Benitez is another volunteer with LUCHA who has been helping with DACA renewals. She said they’ve helped about 95 people and while it’s nice to help those she can, it’s also disappointing when she can’t help those who are not eligible. 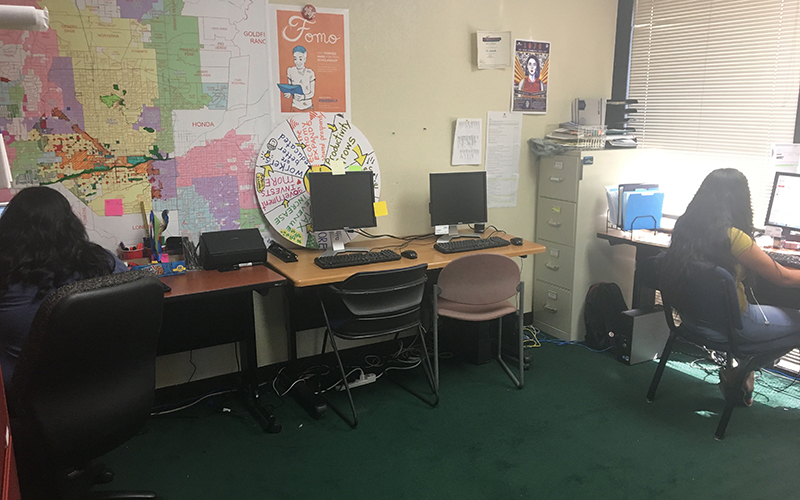 Jazmin Nuñez and Daniela Benitez have been working throughout the past month to complete DACA renewals. (Photo by Angelica Cabral/Cronkite News).

To be eligible for renewal under President Trump’s guidelines, a person’s DACA status couldn’t expire before March 5, 2018.

Benitez said there have been people coming in trying to renew, but they didn’t qualify.

“They believe that they can renew and it’s heartbreaking to see those people, talking about their stories,” she said. “And that’s the reason why I’m doing that and why I’m helping because it breaks my heart to see so many people coming in and really having no idea or not getting informed about different types of things going on.”

Just like Nuñez, Benitez’s sister is a past DACA recipient who wasn’t eligible for renewal.

“That’s one the main reasons I’m here because I just want the people that have the chance to renew and hopefully it turns out to be successful.”

She said the experience of participating in the process of DACA renewals can be stressful, but it has its upsides.

“I feel like it’s going to be my conscious if something bad happens,” she said. “But it also feels so great helping so many people, getting hugged by so many moms coming in saying thank you for the help. It’s like a blessing being here, it’s an honor actually, being here with these people.”