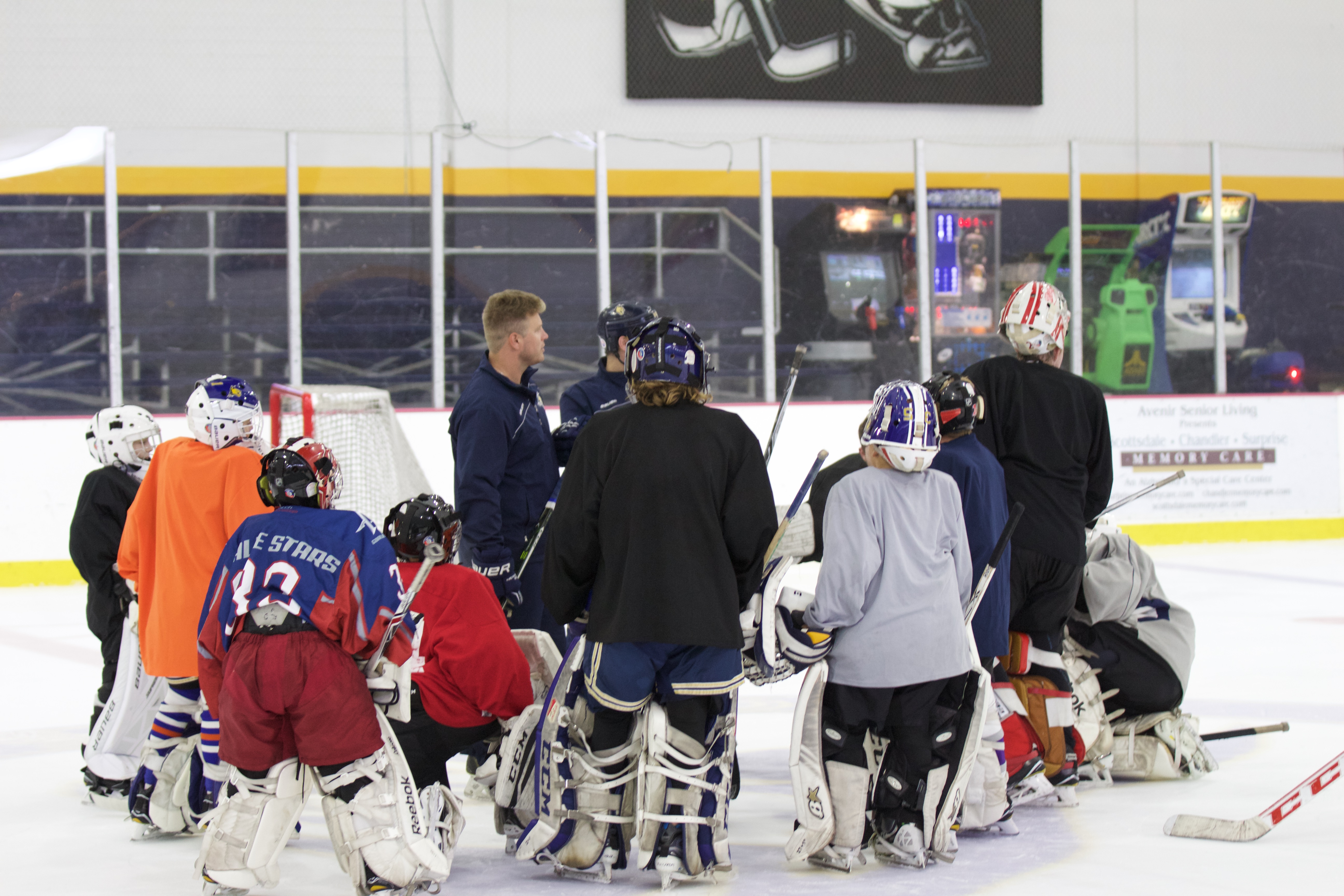 Youth hockey players from across the Valley gather at Arcadia Ice Arena to work on their skills. (Photo by John Arlia/ Cronkite News)

PHOENIX – Every morning, Blaise Becker wakes up just after 4 a.m., packs his hockey bag and heads off to Arcadia Ice Arena.

The goaltender plays in a local adult league from 5:30 to 7:15 and follows that up with an individual training session with his goalie coach that runs until about 9 a.m.

Then, the 12-year-old Phoenix native puts his NHL aspirations on hold for six hours of schoolwork led by his father, Guy, a former teacher. He heads back onto the ice in the afternoon for more games and practice.

“I’m here a lot,” Blaise said. “You can ask my friends, this is almost my home.”

Blaise plays on the U-12 AAA Arizona Bobcats, an elite travel team that competes from August through March and travels to tournaments across North America. The Bobcats are the same club that produced Toronto Maple Leafs’ forward Auston Matthews, who in June won the NHL’s Calder Trophy as the league’s best rookie.

Blaise and other youth athletes across Arizona are beginning specialized sport training at younger ages. That can prepare athletes to excel, but also puts them at risk of burnout and overuse injuries.

Blaise began playing hockey at age 5, but didn’t start specialized hockey training until he turned 8. Guy said that Blaise played other sports, including soccer, but never at a competitive level.

“This is something that’s totally different because he does this every day,” Guy said. “He’s been doing this every day for about four years.”

That is, when he’s been healthy.

Two years ago, Blaise’s hockey routine ground to a halt when he was diagnosed with a growth plate fracture in his right knee that required six weeks in a cast and a wheelchair.

“The pain felt like a rubber band was attached from my knee to my foot and I couldn’t pull it out,” Blaise said. “When I tried to put weight on it, it would get pulled back and it would start to hurt a bit.”

The American Academy of Orthopaedic Surgeons reports that growth plate fractures make up 15 percent to 30 percent of all childhood fractures because they are the last part of a child’s bone structure to harden. The injury can be caused by a singular event or gradual stress on the bone.

“When you play repeatedly as goalie you’re driving your knees down,” Blaise said. “It causes stress on your knees and the growth plates, especially when you’re still growing.”

Dr. Brian Nielsen, a pediatric orthopedist at the Tucson Orthopaedic Institute said that growth-plate overuse injuries are one of the biggest trends he sees among youth athletes at his clinic.

“A growth plate of course is the cartilage plate in between the two caps of bone that allows you to get bigger,” Nielsen said. “The younger you are, when you’re more intense with sports, the more likely you are to make that irritated and sore.”

One-third of all growth-plate fractures occur during participation in competitive sports, according to AAOS.

“People are really intense with their year-round sports,” Nielsen said. “And our bodies aren’t really made to play things year round and they’re doing that all the time and it really hurts their growth plates sometimes.”

A 2014 study in the BMC Sports Science, Medicine & Rehabilitation Journal backed up that statement, finding that “sudden and gradual onset physeal (growth plate) injury is a unique injury to the pediatric population, which can adversely affect growth if not managed correctly.”

If not treated promptly, growth plate fractures could stunt or over-stimulate growth, causing one bone (leg in Blaise’s case) to be longer than the other.

The study also confirmed that young athletes are prone to “stress-related physeal injuries”, which can be developed when stressing the same growth plate over and over. 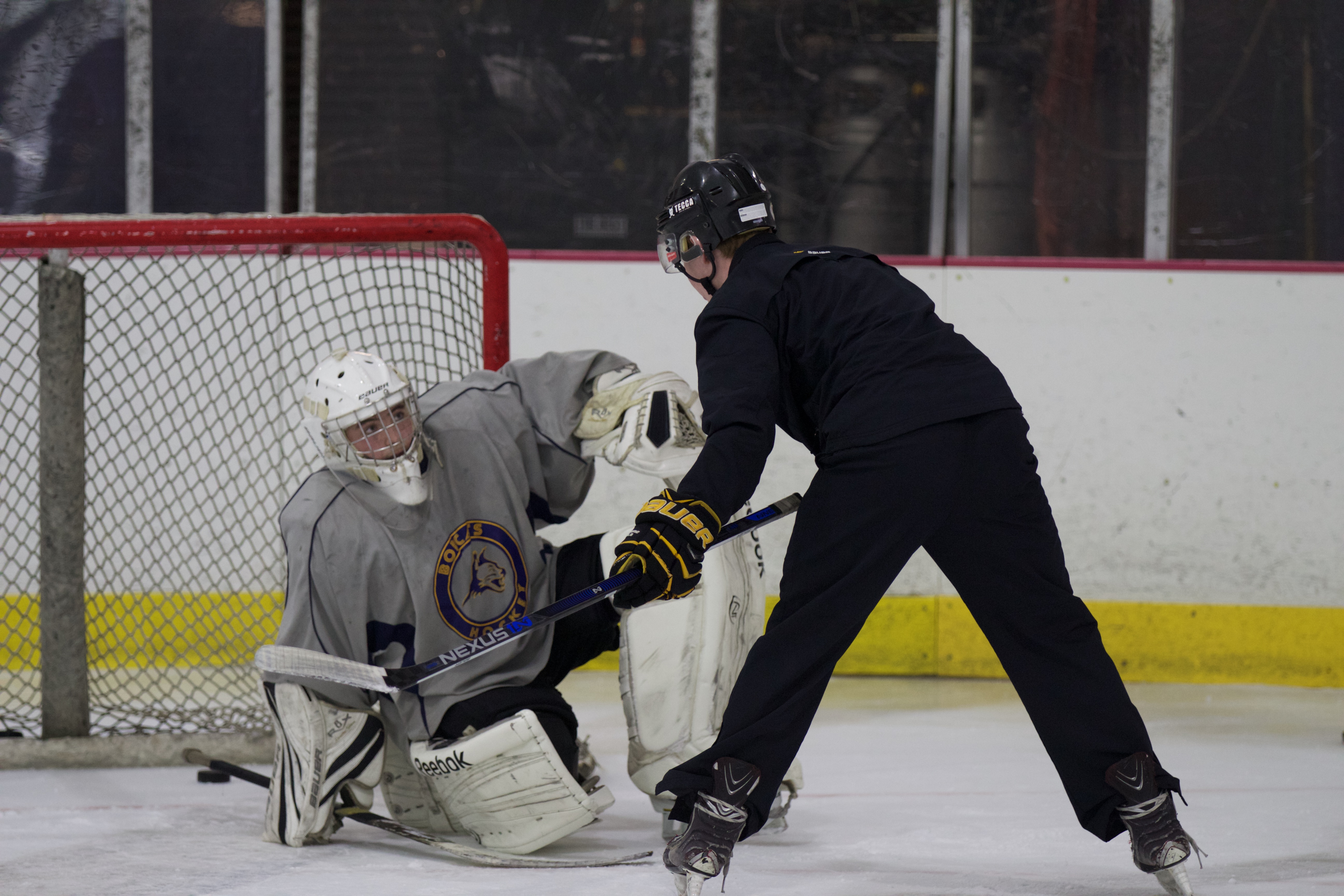 Overuse injuries are not limited to growth plates. The American Medical Society for Sports Medicine said that overuse injuries “can involve the muscle-tendon unit, bone, bursa, neurovascular structures and the physis (growth plate)”.

Though overuse injuries are not limited to one area of the body, they usually are specific to an athlete’s sport of choice.

“So in baseball, we see a lot of shoulders and elbows,” Nielsen said. “In track, a lot of heels, those type of things.”

“They spend hours just in bad posture. They would be slouching or they would be leaning forward,” Jimenez said. “So we see a lot of neck pain, neck injuries and there’s a lot of nerves and muscles that are in the neck area so you get compression in there.”

As odd as it may sound, injuries play a significant role in eSports just like they do in any other sport. This was especially true in 2015, when Tai Lam, one of the top League Of Legends players in North America, retired because of a persistent wrist injury.

Jimenez said gamers, who seem reluctant to seek medical attention for their injuries, often get misdiagnosed with carpal tunnel syndrome.

Jimenez and Nielsen believe that sport specialization is one of the biggest causes of overuse injuries in youth athletes. Unlike the old days where children used to play a different sport in each season of the school year, many, like Blaise and his fellow Bobcats, are now focusing all of their efforts on one sport throughout the year.

“There’s no rest for those muscles that need to recover in terms of just the one sport,” Jimenez said. “They need to diversify and they need rest.”

“I would say that the younger a player is, they should probably go maybe three or four months of fairly hard play and then they should take two or three months off,” Nielsen said. “There’s no scientific study on that, but I think maybe that a 2-1 ratio is probably a realistic goal.”

A 2015 study led by Dr. Neeru Jayanthi, one of the country’s leading experts on youth sports health, injuries and sports training patterns, found that “sports specialization alone, independent of age and training volume, increases the risk for overall injury and serious overuse injury in young athletes.”

Jayanthi’s study, which was published in American Journal of Sports Medicine, suggests that athletes who specialize increase their risk of injury because they constantly repeat one motion, like a baseball pitch or tennis serve, making them “more likely to develop imbalances in muscle strength and flexibility”.

Guy Becker believes athletes or any professional must push themselves to make it to the highest levels. But, he said he doesn’t push his son to keep playing hockey and that Blaise is only out on the ice every day because he enjoys it. 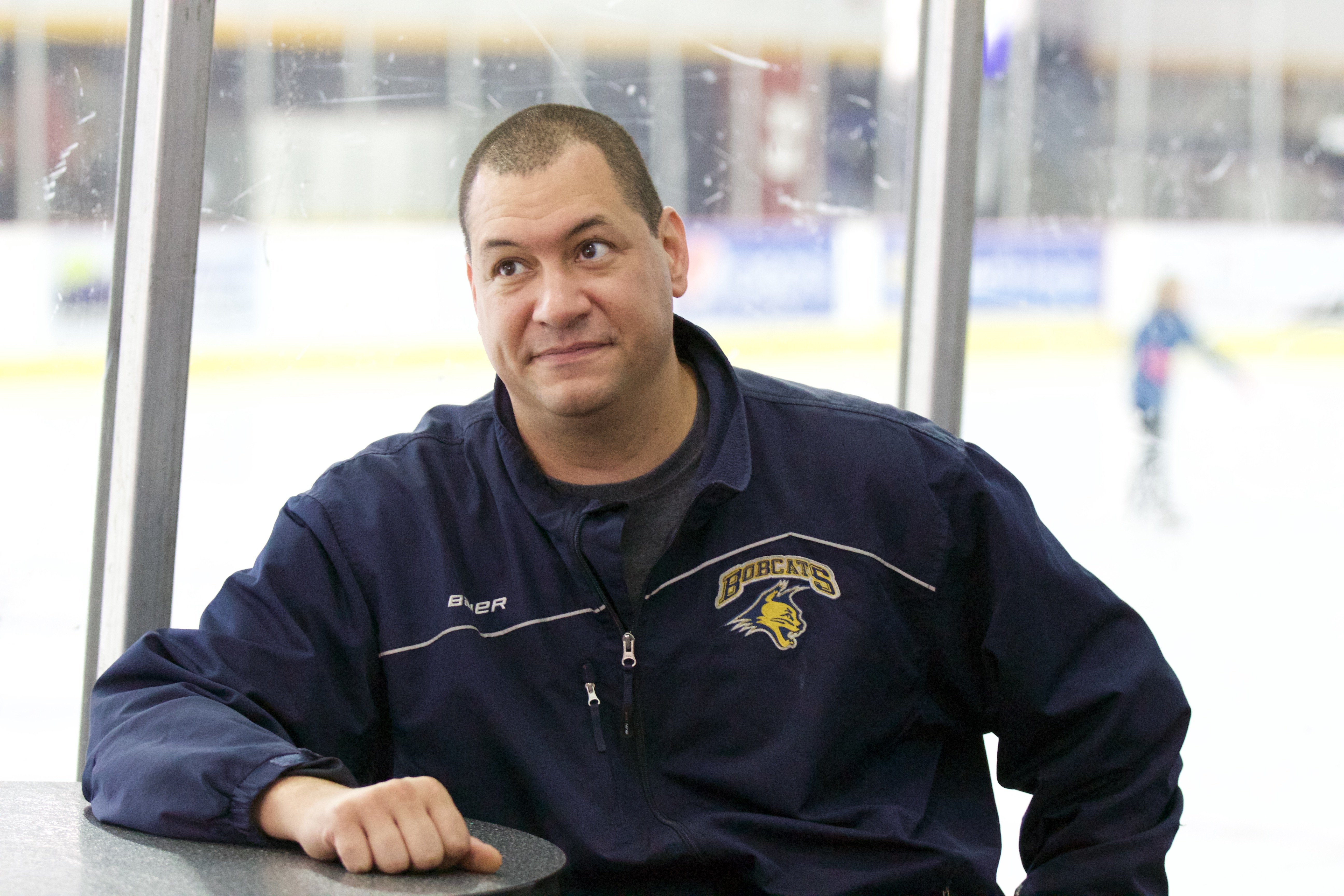 “If you want to be the greatest astrophysicist in the world you’re going to have to read books and study math more intensely than other people,” Guy said. “If it wasn’t a passion of his that he loves, I would have him do more resting.”

“He’s the one coming to my bed and saying ‘Dad, Dad, we gotta go. I don’t want to be late again. You made me late last week.’ He loves it.”

Jimenez and Nielsen agree that by focusing on one particular muscle group, youth athletes often fail to train others, most notably their abdominal muscles.

“If they get that strength in the core and the muscle memory and get their angles correct they’ll keep remembering how to do that and their body will just do it,” Nielsen said. “I really think it makes them a lot less susceptible to the long-term injuries.”

In order to lower the risk of injury, doctors agree that athletes also need to limit their time in organized activities, like practices or games.

The the number of hours youth athletes spend playing sports each week should not exceed their age in years, according to Jayanthi’s study. That means a 12-year-old should be training a maximum of 12 hours per week.

Most sports also have recommended guidelines to protect youth athletes from pushing their bodies too far.

For example, Little League Baseball has implemented a pitch count rule that limits pitchers based on their age to a finite amount of pitches per game and mandates rest days after passing certain thresholds. 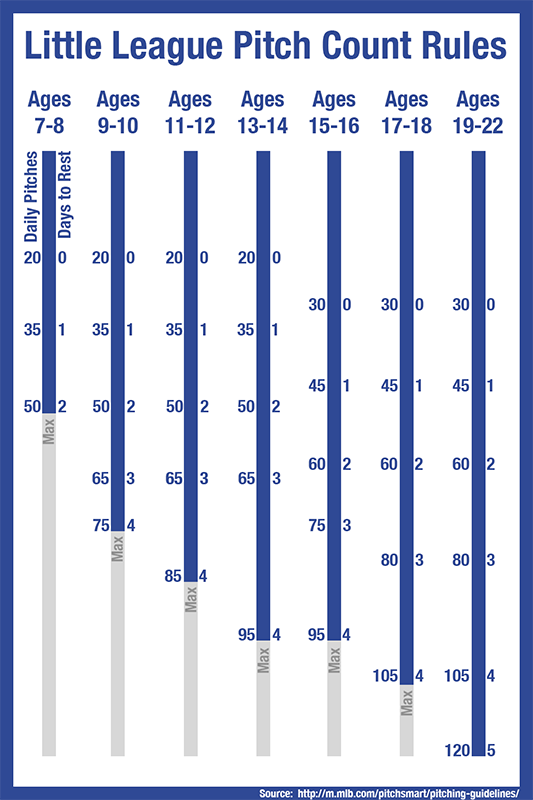 “Those aren’t just arbitrarily decided,” Nielsen said. “They’re actually based on studies with the growth plates and the more you stick with something like that, the less likely you are to damage yourself in the long term.”

USA Hockey, the governing body for amateur hockey in the United States, does not have specific restrictions on play, but recommends taking certain actions to prevent injuries. It encourages each player to get a pre-season injury screening and do sports-specific conditioning as well as focused stretching and strength training programs.

Blaise said that he has no lingering effects from his growth plate injury and is happy to get back to putting in the hours to improve his game.

“I always like pushing myself to the limit,” Blaise said. “I think it’s good mentally and physically to know your limits and to push yourself a little bit over.”

“I always love playing on the ice. It is always fun to skate around, especially in the heat. I just really enjoy it.”