As light rail expansion continues, commuters and residents along the corridor are concerned about safety and business impact. (Video by Alexis Hart/Cronkite News)

PHOENIX – In the middle of the day, the lights are on and De La Ana European Delicatessen is open – but the door is locked.

Owner Ana Berzan said she often feels uneasy at work because of people loitering around the property. It’s a sentiment shared by neighbors and one exacerbated since the light rail rolled up to Northern and 19th Ave in 2016.

The light rail is credited for being part of the revitalization of the greater Phoenix area, and regular commuters praise it for its ease of use. Many are enthusiastic about future light rail expansions, saying it has become part of the city’s identity. However, the necessity to grow does not mitigate the concerns some commuters and residents along the corridor raise for how these plans will impact safety and business.

About 53,000 people board the light rail daily, according to Susan Tierney, a spokeswoman for Valley Metro Rail.

“We’ve already exceeded the number of ridership we expected to see in the year 2020,” Tierney said. “We’ve grown not only with the ridership, which has increased due to the extensions we had in 2015 and 2016, but we just continue to increase our ridership along the entire 26 miles.”

The original 20-mile rail line underwent two expansions in the past two years. In 2015, 3.1-miles were added in Mesa, extending the line to Mesa Drive and adding a total of four stations. By March 2016, the extension from 19th Ave. and Montebello to the southwest corner of 19th Ave and Dunlap opened two additional stations to the public.

It was the construction of one of these additional stations that began complicating things for Berzan, she explained. Pointing to the street divided by a track and platform outside her shop, she said accessibility is more complicated as it’s almost impossible to turn.

“There’s only two lanes,” Berzan said, “And I have 53-foot trucks that would come here. I have to have them deliver some other place and I go pick it up. It’s more work, more hassle, more money – I spend time and money picking up my own merchandise rather than having it delivered right here.”

Being situated across from the light rail has not helped increase clientele, either. As the shop specializes in ethnic food, shoppers make the extra effort to come to the store, Berzan said, even calling ahead to inform her that they will be coming. This is helpful, as Berzan said now she tends to lock the front door even during business hours.

“I noticed more, not necessarily crime, but a lot more homeless people and trespassing,” Berzan said. “They sleep in the corners, they pee around here. … I don’t feel safe.”

It is a tense, dejected feeling reflected in the voices of owners and employees in neighboring businesses. One business owner, who asked not to be named because of fear of repercussions, said he doesn’t believe anyone working in the area is happy.

Bob Bean, president of the Amalgamated Transit Union Local 1433 , said light rail operators have the same concerns. Early in the morning and late at night, drivers have to clear the light rail and worry for their safety.

Though Bean does not like overgeneralizing the term “homeless,” acknowledging some people are veterans or are “down on their luck,” he said these people can cause issues not only for drivers, but the public.

“As the rail expanded more to Dunlap, you found more and more… vagrants,” Bean said, explaining the issues operators end up dealing with. “The big ones are using the trains for washrooms. Puking on the trains, and they (operators) are expected to go rope the area off and clear the car. It’s not fair to them and it’s not fair to the public that they’re being harassed…”

While many say that the light rail has made transportation easier, a survey of commuters and residents along the corridor revealed that a sense of unease arises when they witness certain activities. Describing increased loitering and littered drug paraphernalia, a concern for public safety is unanimously paramount.

Although crime statistics from the Phoenix Police Department don’t show a significant increase, a fact echoed by Valley Metro Rail, there have been recent instances of assault and a murder back in November 2016, prompting Valley Metro to increase security.

“We have not had an increase in crimes, notably, however we do feel that the concerns of the residents are fair,” Tierney said.

Valley Metro Rail has plans to increase its number of privately contracted security officers with Allied Universal Security Services from 57 to 73 by this summer. These officers not only provide a visual deterrent, but have the authority to issue citations for trespassing, which Tierney says is the largest offense along the light rail.

In addition, the city of Phoenix is increasing presence of the Transit Enforcement Unit along 19th Ave, according to Phoenix Public Transit Department spokesman, Lars Jacoby.

“The 19th Avenue Corridor Extra Duty Program” will add four additional Phoenix police officers to the TEU’s normal enforcement duties, adding as much as 120 extra patrol hours per week, costing up to $326,000 for a year.

“We don’t want any rider to feel that they’re unsafe,” Tierney said. “Crime is something that of course we are obviously very concerned about, but as our system expands and matures, we are going to see an evolution of the system. It’s important for us to stay on top of whatever’s happening in that neighborhood and be a part of that neighborhood, to send a message that crime is not tolerated on our system.”

Tierney said that the system is a reflection of the communities it serves. If crime is in the area, it is not because the light rail brought it, “but that it’s there and those station platforms are a gathering place,” she said.

In Phoenix, the unsecured platforms allow it to be “a free-for-all,” Bean said. He cited other large cities’ use of turnstiles or gates to prevent lingering on the platform or boarding a train without a ticket. 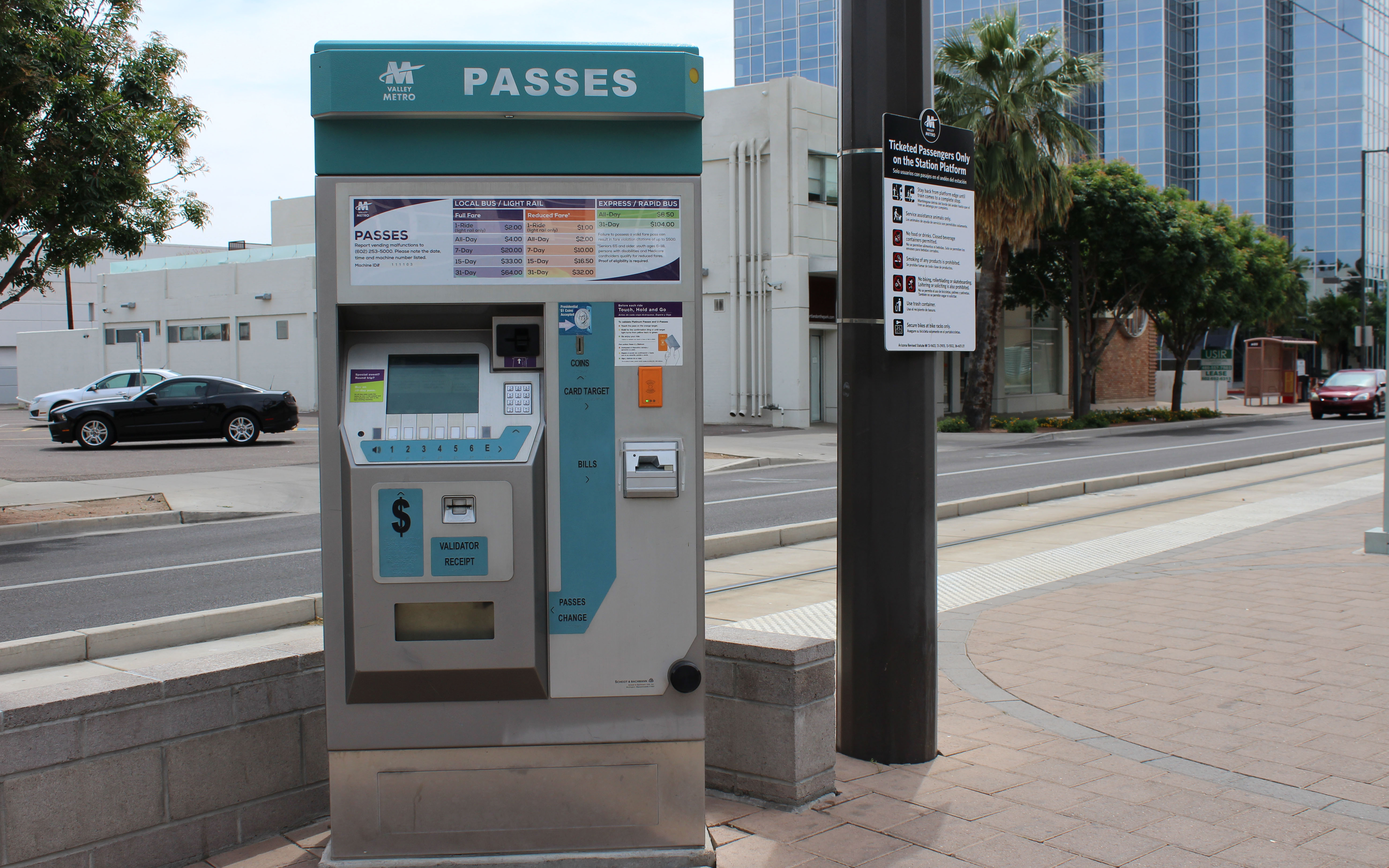 While there are no access barriers, ticket stations and signs encourage commuters to purchase a ticket prior to entering platform. (Photo by Tea F. Price/Cronkite News) 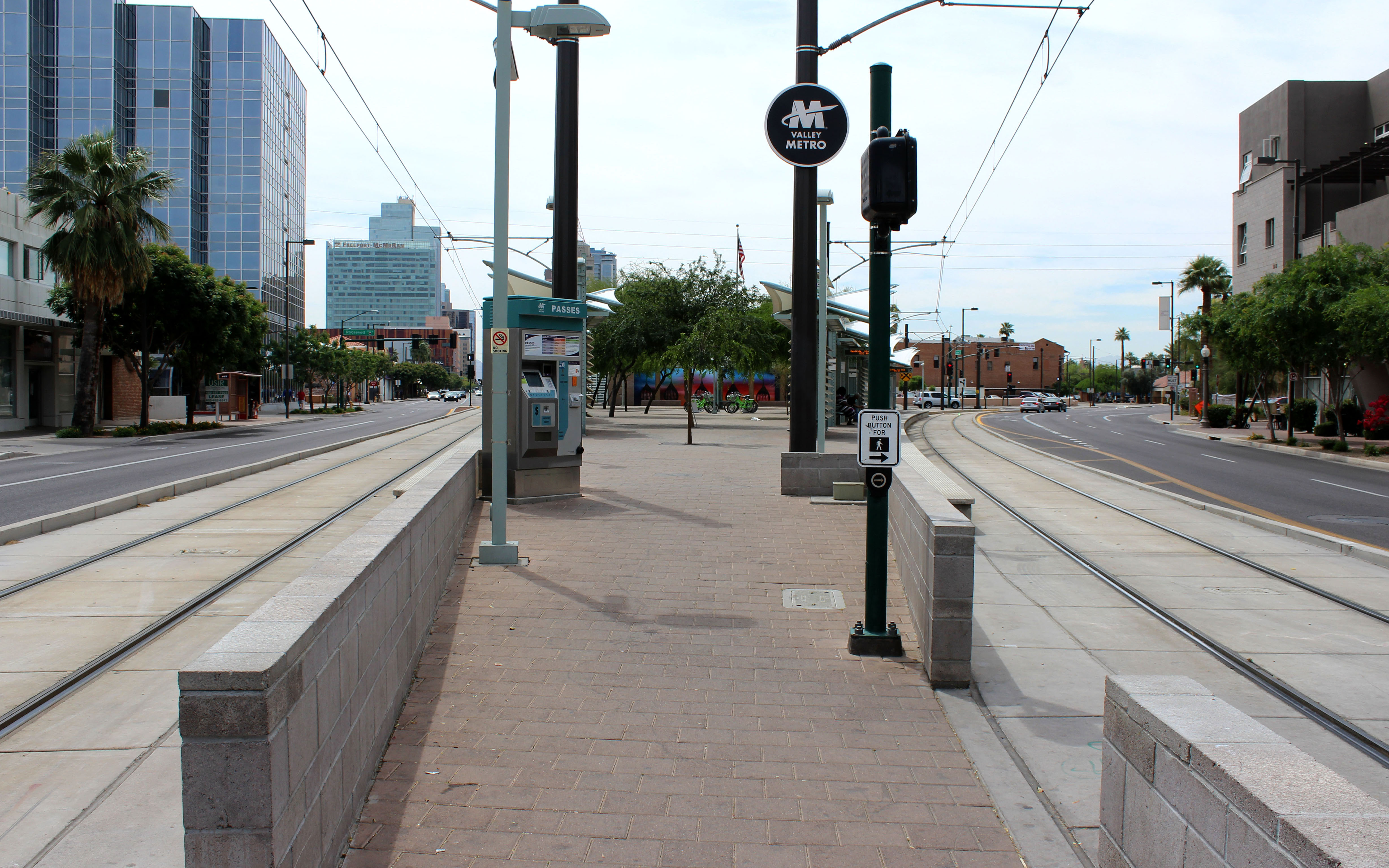 Light rail platforms are constructed in an open style, something Valley Metro Rail says is done to integrate them within a community. (Photo by Tea F. Price/Cronkite News)

Mary Papenhausen, marketing and promotions manager at Zia Records on 19th Ave, said the city of Phoenix knows about problem areas along the corridor and that vigilance has been very good.

“It (the light rail) opens up the city and I think that’s the greatest benefit from it … bringing communities from other areas into Phoenix,” Papenhausen said. “There’s a reason this (expansion) is happening. I should hope it’s for the betterment and everybody’s on board.” 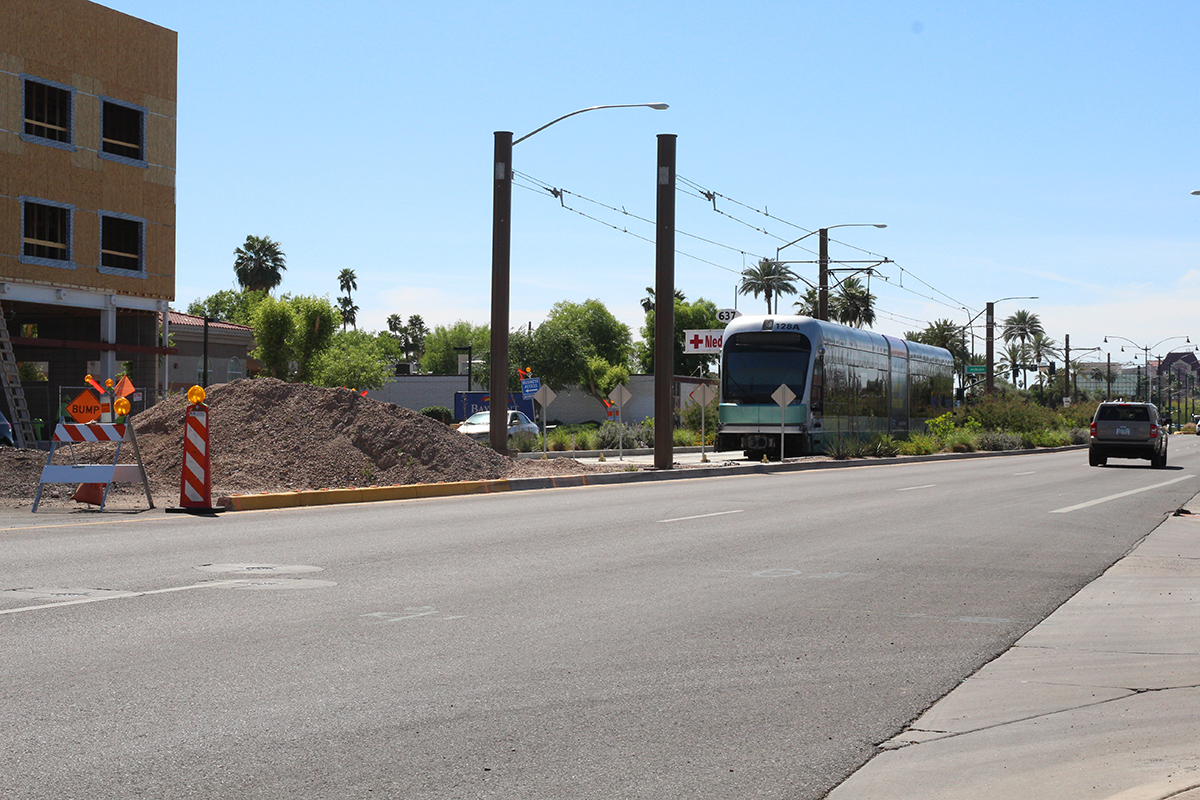 Light rail construction is underway in Mesa, the extension of a line set to reach Gilbert Road. (Photo by Courtney Columbus/Cronkite News)

Now a single thread connecting 35 stations, Valley Metro rail traverses from 19th Ave, down Central Ave., before continuing through Tempe to Mesa Drive. There are plans for expansion, according to Corinne Holliday, spokeswoman for Valley Metro.

“There will be a 66-mile high capacity transit system by 2034,” Holliday said. “It’s not all light rail, it will include streetcar, but it will all connect into one system.”

A $50 million plan was approved by the Phoenix City Council on April 19 for expansion of the light rail into southern Phoenix.

Upcoming projects already underway include an “infill” station on 50th Street and Washington, plus a rail-line extension to Gilbert Road in Mesa for 2019.

“The 50th street station will cost approximately $22.9 million,” Holliday said. “For the Gilbert extension, the cost of construction is estimated at $186 million and that will be paid for using federal, regional, and local funds.”

Tierney said the federal government has given Valley Metro great support. But, budget cutting proposals in Washington could impact that support.

A big part of public commitment comes down to the disruption of construction. For local businesses along the light rail corridor, prospects of clientele access can be daunting.

Connor Descheemaker, community planning coordinator for Local First Arizona, said his company along with Valley Metro Rail, do everything they can to highlight businesses impacted by construction. From free advertising to hosting events, supporting locally owned businesses is a priority for all involved.

Descheemaker said there was a net zero business loss during the Mesa expansion, meaning between the start and end of construction, the same number of local businesses existed.

“Yes, it may be difficult for a while,” Descheemaker added, “but if we can provide a thorough line of communication with the subcontractors…the city of Phoenix to know what resources they have available, and Valley Metro who’s going to be managing the system, then we can make it so that businesses are able to weather and come out better than ever…In the long term, the impact will almost universally be positive.”