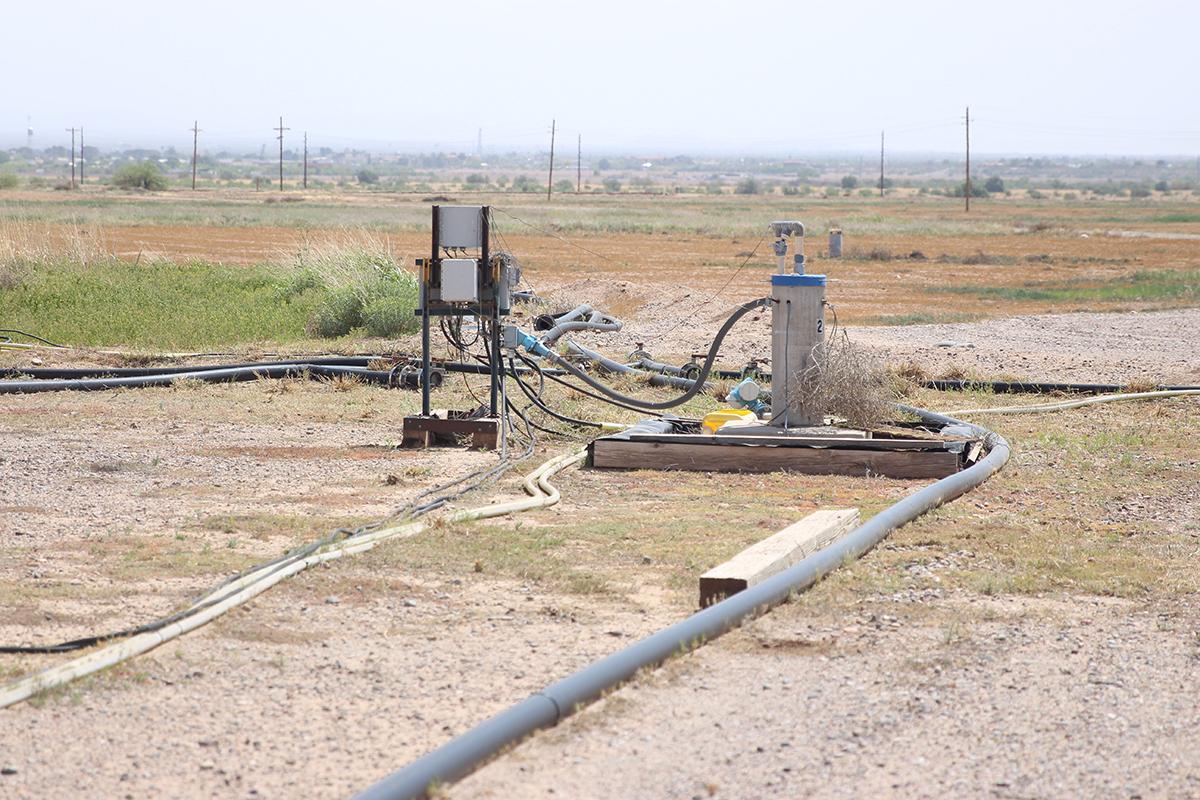 The wells on Florence Copper’s property are left over from a 90-day pilot test conducted by the BHP Copper Company the late 1990s. (Photo by Kaly Nasiff/Cronkite News)

FLORENCE – Arizona’s economy has been built historically on the 5 c’s: cotton, citrus, cattle, climate and copper.

The state’s mining industry – Arizona makes up 65 percent of copper production in the United States – employs about 11,000 people and generates thousands of jobs in connected industries.
But the industry has been battling permitting issues and environmental concerns, especially in Florence, where residents have been working for eight years to block a copper mine

The Florence Copper Project is an underground copper recovery site that is in development in Florence. The in-situ copper recovery (ISCR) process occurs between 400 to 1,200 feet underground, where a mixture of 99.5 percent water and 0.5 percent sulfuric acid dissolves copper into the bedrock. Then the copper solution is pumped to the surface and processed into copper cathode sheets.

Florence Copper is one of three ISCR sites under development in Arizona. The others are Gunnison Copper Project near Wilcox and the Van Dyke project in the Globe-Miami district. Gunnison is owned by the Excelsior Mining Corporation and Van Dyke is owned by a subsidiary of Copper Fox Metals Inc. Both companies, and Taseko, which owns Florence Copper, are based in Canada.

In-situ recovery is most commonly used for uranium mining and accounted for 48 percent of the world’s uranium production in 2015, according to the World Nuclear Association.

Florence Copper says the pH of the water and sulfuric acid solution is similar to that of “common household vinegar.” Jess Knudson, public information officer for the town of Florence, says the biggest concern for the town is the use of that acid.

“The mining operation is in the geographic center of the town of Florence and right above our water aquifer that’s utilized for drinking water in the area,” he said. “If the water table was tainted in any way it would be absolutely devastating for our community.”

Dan Johnson, vice president and general manager of Florence Copper Project, says the injection and extraction wells have various protections. Each well is anchored in the bedrock by acid resistant cement. The wells are then sealed by two different casings, one steel and the other fiberglass.

“We’re protecting the aboveground zones, the water bearing zones that we’re penetrating to get to the bedrock,” he said.

The in-situ process is different from hydraulic fracturing, or fracking, because in-situ occurs on land that is already deeply fissured. Fracking uses the high pressure injection of liquid to create fissures in the ground for the extraction of natural gas.

Over its 25 year life, Florence Copper estimates the economic impact of its site to be $3.4 billion in the state of Arizona, with $2.1 billion going to Pinal County. It says it will directly employ 170 employees and with those combined with indirect jobs would create almost 800 jobs for Arizonans.

Barbara Manning is a resident of the Sun City Anthem community in Florence and a member of Protect Our Water, a grassroots movement of about 400 members working to stop Florence Copper. She has been against the mining site from the start. 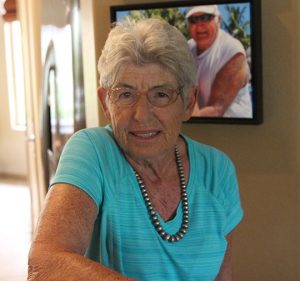 “Copper, yes it will be profitable for somebody, but water in the desert is gold,” she said.

From 1996 to 1998, the BHP Copper company looked at a project on what is now part of Florence Copper’s site. They conducted a 90-day pilot test to see if the in-situ method worked on the site. Stacy Gramazio, Florence Copper’s manager of communications and public affairs, says that that test was successful.

“It really did prove that the in-situ method worked at this very rare copper deposit here in Florence,” she said. “They were able to recover the copper in a very environmentally responsible and economically feasible way.”

In 2014, the Town of Florence, Pulte Home Corporation, Johnson Utilities and Southwest Value Partners appealed Florence Copper’s Temporary Individual Aquifer Protection Permit to the Water Quality Appeals Board. The appeals board then referred the case to an administrative law judge.

The judge said that sections of the permit were “arbitrary, unreasonable, unlawful or based upon technical judgment that was clearly invalid.” The appeal was sustained in part and the permit was rescinded.

“Either they don’t have the expertise they say they have, or they purposefully presented a permit that did not have monitors to protect our water supply,” said Manning. “It’s one or the other. How do you trust a company like that?”

Since then, Florence Copper has worked with the Arizona Department of Environmental Quality to correct the items the judge found issue with. ADEQ then granted the permit, and the Town of Florence, Pulte Homes and Southwest Value Partners again appealed. The Water Quality Appeals Board held hearings and found that the judge’s concerns had been satisfied.

The appellants have again filed objections and Manning says those opposed to the mining site have lost trust in ADEQ.

“ADEQ is not going to come down and read their monitors,” she said. “We can’t depend on ADEQ to protect us.”

Director of ADEQ, Misael Cabrera says his department understands the concern and it is very protective of groundwater resources.

“This is the most protective, most highly monitored permit that anyone in the department can remember, and so we feel that it does the job of protecting the environment, while at the same time allowing this particular company to start its operation,” he said.

Florence residents aren’t fighting this battle alone. Southwest Value Partners, an investment group that owns property near the mining site, has been an outspoken opponent. The town of Florence has also taken legal action against the project. They said in the last four years the town has spent an average of $297,000 per year in legal fees trying to halt Florence Copper.

Florence Copper says it welcomes those who oppose the mine and have questions to take a tour of its site. 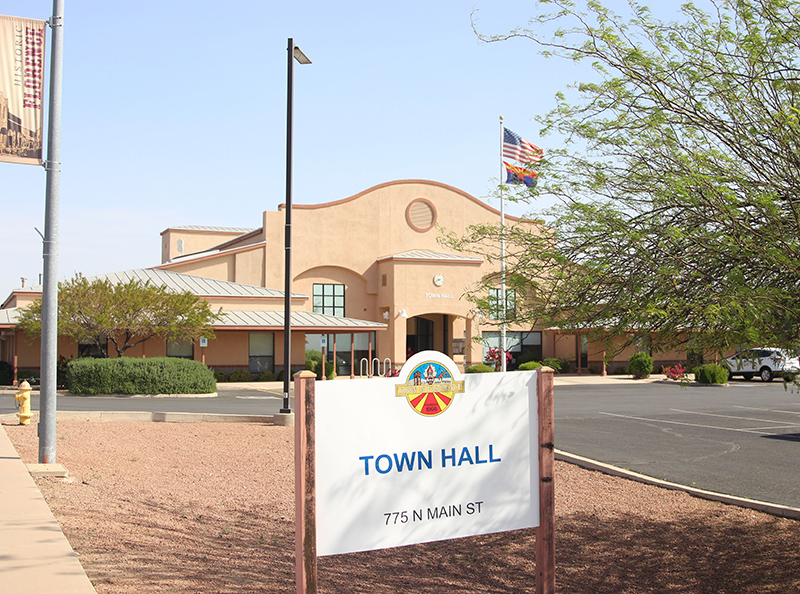 The town of Florence has spent $297,000 in legal fees per year since 2013 fighting Florence Copper (Photo by Kaly Nasiff/Cronkite News)

In 2016, mining accounted for 11,500 jobs in Arizona, down 1,000 from the year before, according to data from the L. William Seidman Research Institute at Arizona State University. Kelly Norton, president of the Arizona Mining Association, stresses the importance of indirect jobs that mining accounts for in fields like construction. There were 31,800 of those jobs in 2014 and the mining industry had an impact of $4.29 billion on Arizona’s economy that year, according to the Seidman Research Institute.

There are currently 14 mines open in the state and six that are in various stages of the permitting process, according to Norton. Those six are Florence Copper, Gunnison Copper, the Van Dyke project, the Resolution Copper Mine near Superior, Rosemont Project in Pima County and the Arizona Mining Taylor Project.

“The future of mining is bright in Arizona,” she said. “So if we can get through the permitting process, which mostly is the federal government. State government is very supportive of mining. Then we can get those six new projects open, which is thousands of jobs and thousands of taxes back to the state.”

In March, Rio Tinto, the company developing Resolution Copper near Superior, testified before Congress that it had spent over $1.3 billion developing the project and is years away from a final permit. Part of its mining site includes Oak Flat, a section of Tonto National Forest that the San Carlos Apache Tribe views as sacred.

The Rosemont mine is a $1.5 billion project in the Santa Rita Mountains. If opened, it would be one of the largest copper mines in the United States. The Center for Biological Diversity opposes the mine because it would take over the habitat of endangered and vulnerable animals, like jaguars and ocelots. The mine is waiting for a decision by the San Francisco regional office of the U.S. Army Corps of Engineers on its Clean Water Act permit. In 2016, the Los Angeles district office recommended denial of the permit.

Worldwide copper production increased about 5 percent in 2016, according to the International Copper Study Group. That increase was despite a 3 percent decline in Chile. Overall usage increased 2 percent, 0.9 percent in China, which is the largest user of copper. Usage in the United States and Japan, the second and third biggest users, declined by 2 and 2.5 percent, respectively.

Steve Gravley comes from a long line of miners and now he trains new miners in his role as director of University of Arizona’s San Xavier Underground Mining Laboratory.

“For many many years, I did not appreciate what was going on,” he said. “And then there was some point, when I was a teenager perhaps, I realized that every time you turn on a light, you better thank a miner for his dedication.”

In his 37 year career, Gravley has seen mining go through significant changes thanks to technology. His primary focus at the mine is teaching students safety and technology makes that job easier. He even remembers his father once telling a friend that working in a mine is safer than driving on a highway.

“I have watched throughout my career how technology has really come and played a key role in improving safety, improving productivity, and overall making the mining business just a better place to work,” he said. “I’ve worked all these years and never had any serious incidents or accidents. I’ve had a few scrapes or a cut or two, but nothing serious.”