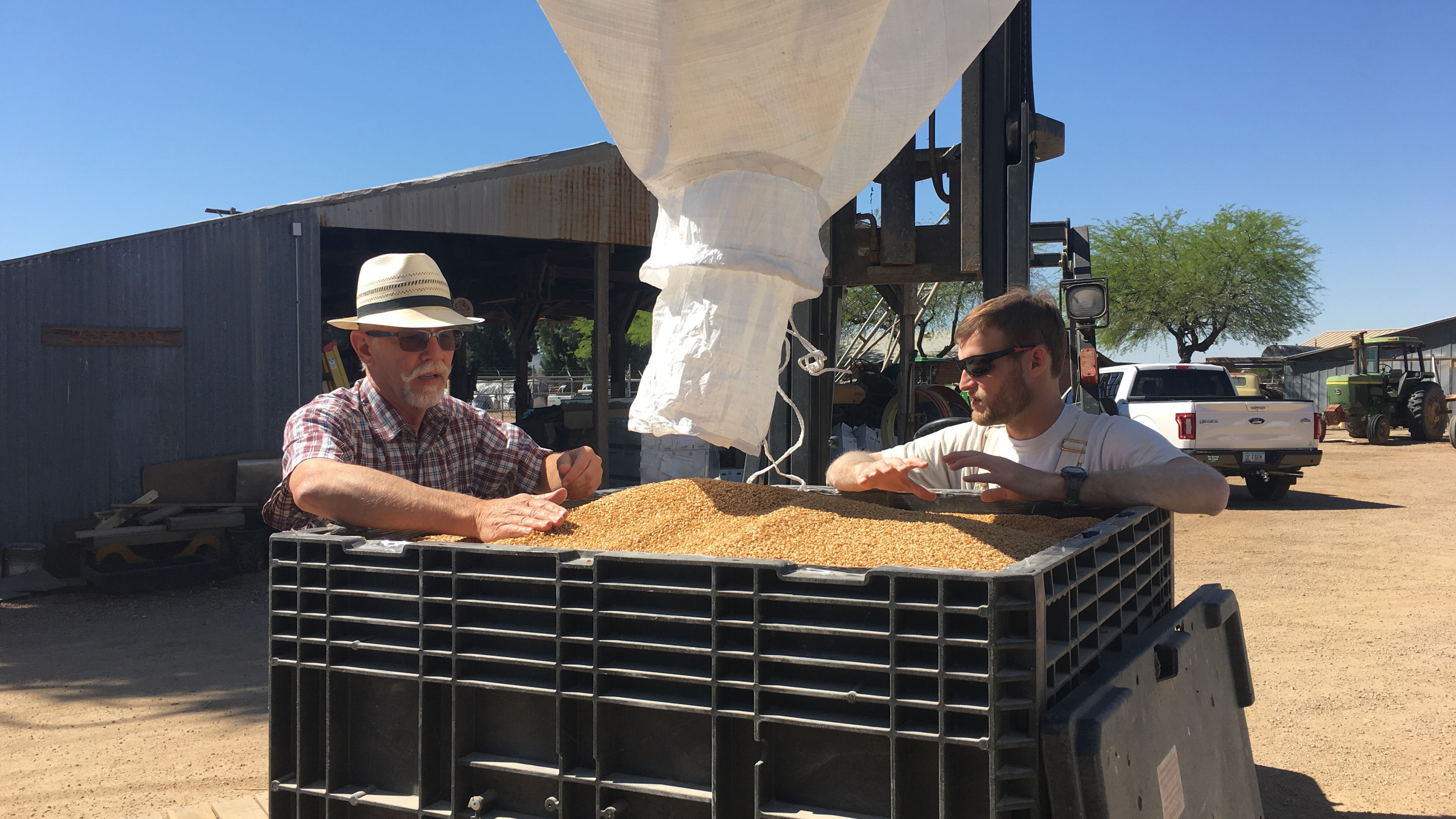 PHOENIX – The ground is 9 degrees hotter at night in Chandler and Gilbert than it was at the turn of the century, as increases in population and development in those areas resulted in changes in land use, according to a 2016 study.

Arizona State University researcher Chuyuan Wang used satellites to study land surface temperatures across the Valley from 2000 to 2014, finding the highest increases in nighttime temperatures in the southeastern reaches of the metro area.

“For the existing developed areas, we did not see an increasing or decreasing trend in land surface temperature,” Wang said. “We found a dramatic change of the land use, land cover, like desert or croplands or vegetative, like grasslands, into developed area, residential, business, commercial, those kinds of things. That’s the reason why it caused the temperature to increase.”

From 2015 to 2016, Maricopa County had the fastest annual growth rate of any U.S. county — adding an average of 222 people per day, according to the Census Bureau. But the county’s rapid growth — both in population and in the developed size of the metro area — dates back more than 50 years, and has brought substantial environmental changes to the Valley.

In 1950, the Phoenix and Avondale urban areas occupied just 55 square miles. By 2010, those areas had expanded to 1,234 square miles – and the metro area now creeps into Pinal County. During that time, the amount of farmland in the county has sharply declined. While some farmers have cut back on the amount of land they farm or left the business altogether, others have found innovative ways of dealing with the pressures of urbanization.

Denny Barney, chairman of the Board of Supervisors for Maricopa County, said the county’s recent population growth is exciting, and a combination of factors have been drawing people to Phoenix, including affordable housing, more available jobs and climate.

“Ultimately, growth is going to happen. The question is, do you moderate it in such a way that allows it to happen responsibly?” Barney said.

The urban heat island effect, characterized by a rise in nighttime low temperatures and an increase in daytime high temperatures, commonly occurs as urbanization increases, studies have shown. The presence of more buildings and asphalt captures heat during the day and is slower to cool down at night.

Wang’s study, published in February 2016, found the highest increases in nighttime temperatures occurred in Chandler and Gilbert, where surface temperatures increased by as much as 9 degrees Fahrenheit compared to nearby rural areas between 2000 and 2014. He found no areas of the Valley that had decreasing nighttime temperatures — but some areas that had an increase in vegetation had a slightly lowered daytime urban heat island effect.

“Increasing the green space can help to lower the land surface temperature, but the problem is that here in Phoenix we don’t have much water,” Wang said.

Most major metropolitan areas have a noticeable effect on temperature, so what’s happening on the edges of the Phoenix metro area is not unique. Air temperatures in cities with more than a million people can be 1.8 degrees to 5.4 degrees warmer than surrounding rural areas. At night, it can be up to 22 degrees warmer in these metropolitan areas, according to the Environmental Protection Agency.

But the quickness of the uptick in Valley temperatures surprised the doctoral student who authored the study. During a recent presentation to a class, Wang emphasized the biggest temperature changes with exclamation points. 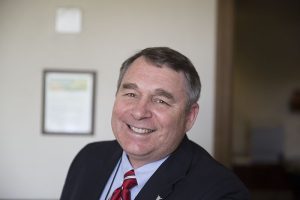 Mark Killian, director of the Arizona Department of Agriculture, said his family has 25 acres of farmland left in Arizona and they can’t bring themselves to sell it. (Photo by Courtney Columbus/Cronkite News)

“I think we’re getting to the point in Arizona where we need to be concerned about the amount of farmland that’s being converted to urbanization,” said Arizona Department of Agriculture director Mark Killian, whose family has also been farming in the state for several generations. “What we have to do as a state is that we have to develop a policy, somehow some way, that keeps those family farmers on their farms.”

Housing developments line each side of the 25-acre piece of land in Mesa where Mark Freeman grows alfalfa. Freeman, a retired paramedic and current Mesa City Council member, believes he’ll be the last in his family to farm.

“My children choose not to farm, so it’s gonna die with me. Now I have a nephew that would love to, but will the land be available? I have a brother and his sons that farm, so when he chooses not to farm anymore, his sons will pick up,” Freeman said.

Fields like the one Freeman farms are disappearing from the outskirts of the Phoenix metro area, as the pressures of urbanization push their owners farther outside of the city or to different areas of the state. Some families stop farming altogether, breaking a tradition that sometimes, as in Freeman’s case, dates back to 1880.

His family bought and sold land in Gilbert and Coolidge, and Freeman now lives in Mesa. The land he farms belongs to an old family friend. He is on the board of the Arizona and Maricopa County farm bureaus and feels a strong connection to farming.

“It’s in my bloodline, I enjoy it, it’s a relief, it’s something that I’ve wanted to do my whole life, but I chose other career, professional career occupations. Even during that time, it allowed me to farm. I have all the equipment, I have the opportunity, I’ll do it until I can’t do it any longer,” Freeman said.

Steve Sossaman, owner and operator of Sossaman Farms, has also felt the pressures of urban encroachment near the land in Queen Creek that has been in his family since the early 1900s. Now, he tries to avoid moving farm equipment on the roads during rush hour.

He has also adapted by switching from commodity crops, which usually can’t be sold at a high price, to older varieties of grains that aren’t as common, such as purple barley. Sossaman says growing grains instead of crops such as cotton and corn also creates much less neighbor-irritating dust. And these specialty crops are better for business.

“Farming habits, if they don’t change, are stuck in old practices that actually cost you money and hinder you.” Sossaman said. “Most of my neighbors were like this, second generation and done. When someone said to them, I’ll buy your property, they said let’s go. That’s my retirement, I’m out of here.”

Trees and vegetation can help to cool urban areas, offsetting the urban heat island effect, according to the Environmental Protection Agency. (Photo by Courtney Columbus/Cronkite News)

Mark Freeman farms 25 acres of land in Mesa. His family has been farming since 1880, but Freeman doesn’t think anyone will carry on the tradition after him. (Photo by Courtney Columbus/Cronkite News)

Mark Freeman said the land he farms is some of the last farmland left in the downtown Mesa area. (Photo by Courtney Columbus/Cronkite News)

Sossaman is a fourth-generation farmer in Queen Creek. He said that as more and more homes have been built near his farm, he switched to growing crops like alfalfa and grains that create less dust. (Photo by Courtney Columbus/Cronkite News)

Maricopa County had the fastest annual population growth of any county in the U.S. from July 2015 to July 2016, adding an average of 222 people per day. (Photo by Courtney Columbus/Cronkite News)

Mick Dalrymple, director of sustainability practices for Arizona State University, said the urban heat island effect is a problem that can be controlled by local actions, in contrast to global environmental problems such as climate change.

“It’s still extremely complicated, but it’s much less complicated than trying to change how the entire world operates,” Dalrymple said.

Retired accountant Debbie Mastry hopes to see more green space in the Valley – which would also help to counteract the urban heat island effect. She has been living in Tempe since 1986.

“I remember when we first moved here there was a lot more space, a lot more farmland. You could drive not very far out of the city and see a lot of nothing. It’s all filled up with houses and strip malls and shopping centers and car dealerships and freeways, things like that,” Mastry said.

“I’d like to think that we’d have, we could maybe balance all that concrete with some natural materials, I guess, for lack of a better word. More gardens, more trees, and more, even desert landscape plants, but those kinds of things versus the concrete and just rock, you know, because that makes the heat even worse.”

After moving to Tempe, she added desert plants such as ocotillo, lantana and mesquite trees to her yard.

“I learned everything I could kill when I first came here,” she said, laughing. “You can’t grow the things in Arizona that you grow in California, the same way at least, in the same time of year, so you just have to learn.”

In addition to adding more vegetation, using building materials that help to cut down on energy demands can also reduce urban heat.

“Our selection of materials can have a significant impact on (the) urban heat island. As the urban heat island grows, air conditioning generates more heat and expels more heat from buildings, which then adds to the problem again. We can change that, we can alter that through choosing different building materials and by making our buildings more passively heat resistant so the air conditioning doesn’t have to work as hard and so you’re not adding that additional heat of having those motors running,” Dalrymple said.

“I remember when summers used to be miserable, but tolerable when the sun went down, and now they’re just miserable,” Kurtz said.

The city encourages practices that help to bring temperatures down, but doesn’t usually require them. Chandler used to have a green building program, but it’s not currently active.

Components of the program includes installing green or cool roofs, increasing the amount of vegetation, and using permeable pavement, according to the city’s 2016 General Plan.

“You know, when we hit the great recession, it was just one of those programs that was easy to set aside for a little while. We need to come back with something,” Kurtz said. “We’ve been talking about it the last few months as we’re approaching our budget cycle, of how we can get that going again without spending money on it, or you know, recognition, or making our own plaques.”