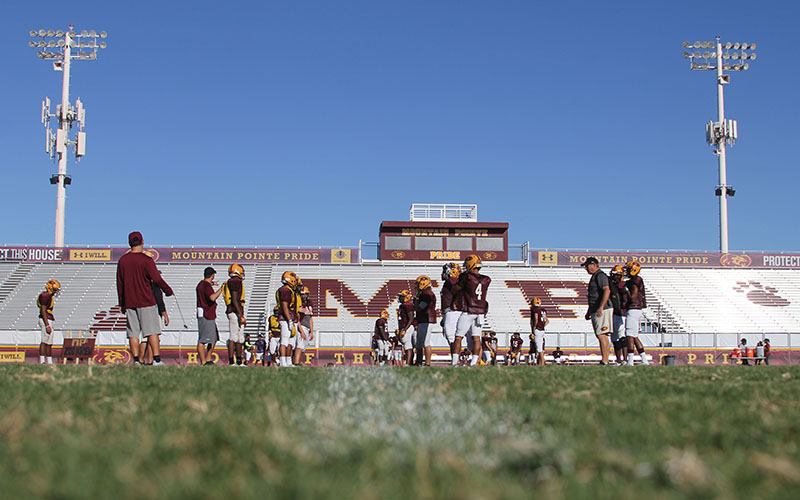 Arizona high school football participation average is up 10 percent, while the national average is down 2.4 percent. (Photo by Ben Halverson/Cronkite News)

PHOENIX – In many parts of the country, high schools are shutting down football programs because of falling participation numbers. Growing concern about concussions is believed to be one reason for the drop, according to Bob Gardner, executive director of the National Federation of State High School Associations.

However, dropping participation numbers are not a problem for most high schools in Arizona. The number of high school football players is actually on the rise in the state and has gone up consistently over the last eight years.

According to the National Federation of State High School Associations, participation in Arizona high school football programs has increased by 10 percent since 2008. By contrast, participation nationally has dropped 2.4 percent over the same timeframe.

Gardner believes concussion concerns might be playing a role in whether parents allow their kids to play football.

However, with new schools opening throughout the state, Arizona is seeing a boom in football participation.

Ryan Ridenour, athletic director at Casteel High School in Queen Creek, said that when the school opened two years ago, the demand for football was immediate.

“Football is kind of the ringleader in sports and athletics,” Ridenour said. “I think it’s one of those things where you kind of have to have it. The numbers were coming in pretty good. Right now, in our program we’re over 100 kids (playing football). And we only have, I believe, right around 900 students at the freshman, sophomore level. So we’ve got about a ninth of our population playing football.”

Aaron Dille, athletic director at North Canyon High School in Phoenix, also has seen participation jump during his first year on the job.

“In looking at last year’s numbers and previous year’s numbers, we have tremendous growth,” Dille said. “This is our first season fielding a freshman, JV and varsity team.”

Although football participation is on the rise in most areas, Blue Ridge High School in Pinetop-Lakeside, a traditional football powerhouse with 13 state championships since 1987, dropped its junior varsity and freshman programs during the 2016 season because of low participation.

But Harold Slemmer, executive director of the Arizona Interscholastic Association, does not believe that Blue Ridge’s numbers dropped because of concussion concerns. School officials did not respond to multiple requests for comment about the reasons for dropping the programs.

“We haven’t seen any indication that there’s less interest in football,” Slemmer said. “Maybe slightly in some areas, but nothing that’s making us concerned whether or not it would slowly phase out, by any means.”

Instead, Slemmer suspects that a drop in population in the community of Pinetop-Lakeside is responsible for the drop in football participation. And restrictions on how much players can cross over from freshman and junior varsity teams to the varsity creates a shortage of players.

“What we’ve done through the bylaws is limited the amount of time freshmen and sophomores can play in any given week,” Slemmer said. “So, they can’t play in a JV game and then play in a varsity game the whole game. So unless you have enough kids out to really field those teams, you’re going to have a difficult time making it through the year.

“Those rural communities change. (Blue Ridge) is a good example. (It) is in the Lakeside area and their population is down. Rural areas kind of come and go as far as population and the number of kids that they have.”

Arizona high schools and the AIA are taking steps to allay fears about concussions and buoy participation, including launching a new AIA insurance program that pays for treatment if an athlete suffers a concussion while participating in a high school sport.

“We collaborate with our physician partners who oversee and supervise our Certified Dignity Health Athletic Trainers we provide to the Gilbert and Chandler Unified school districts,” Apodaca said. “They are experts in sports medicine care (and) concussion detection and treatment, along with our physicians.”

Apodaca also works with a team of doctors and athletic trainers to oversee concussion treatment and protocol in all Arizona high schools.

“Our team works closely with neurologists in our community who are brain specialists … We are also a part of Barrows Neurological Concussion Network, a Dignity Health program overseen by world-renowned concussion specialist, Dr. Javier Cardenas. Suzie Squires is our lead Certified Athletic Trainer.”

The goal is to provide a level of care to high school athletes that college athletes could expect, Apodaca said.

Meanwhile, Slemmer and the AIA partnered with K&K Insurance this year to provide no-deductible insurance coverage for students who require treatment for concussions suffered while participating in a high school sport.

“Certainly the insurance is a huge component because it enables parents to take their kids to a doctor to get examined immediately with no cost to them,” Slemmer said. “Before we had the insurance plan, there was a huge deductible.

“This is a non-deductible, so it pays 100 percent. It takes the excuse out that ‘I can’t afford to have my son or daughter see a doctor’ if they might have been concussed.”

Continued growth in Arizona high school football will depend on educating student-athletes and parents about concussions, according to Dille, the North Canyon athletic director.

“I think they need to do a good job to maintain it by assuring parents that there are safety protocols in place, educating the kids on how to play (football) properly, to their best safety,” he said, adding that staff members also must be trained to take management of concussions seriously.

“We’ve all seen the movies,” Dille said. “The old-school coach says, ‘Rub some dirt on it and go back in.’ We need to educate (parents) that that’s not the way people are anymore, and that your son or daughter, in their respective sport, is going to have someone that cares about them, takes concussions ridiculously seriously and, if anything, is going to err on the side of caution.”