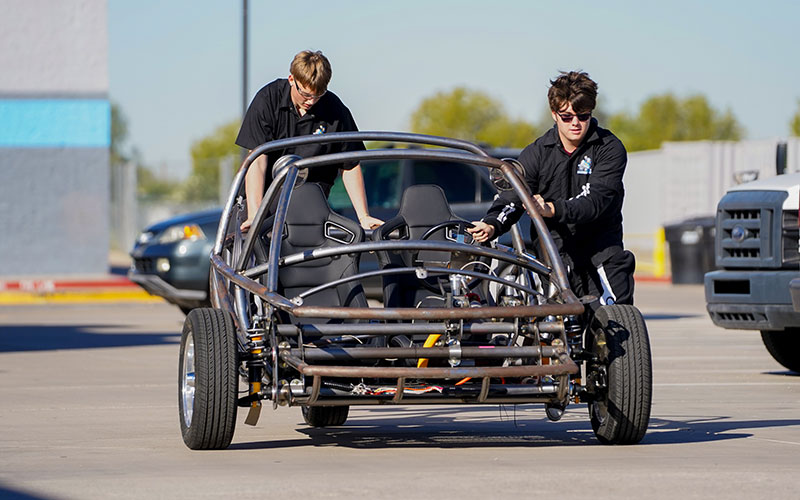 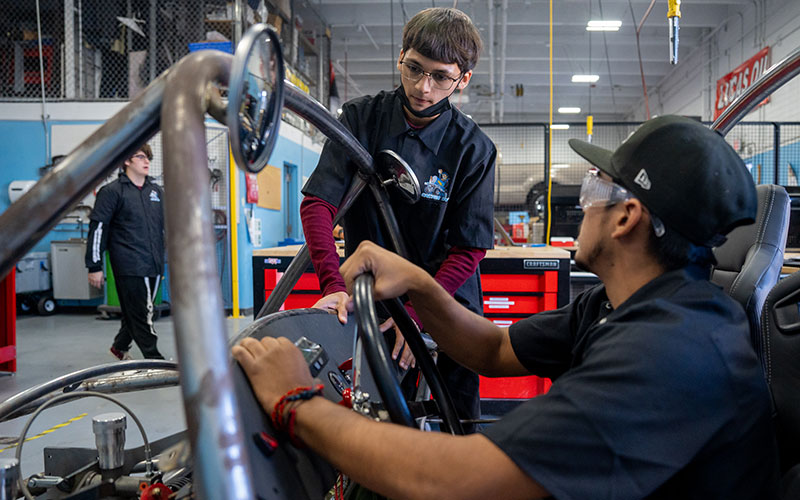 Junior David Jacquez, left, and senior Abel Graber install a dashboard on to an electric vehicle during class at Cactus High School in Glendale on Oct. 31, 2022. (Photo by Samantha Chow/Cronkite News) 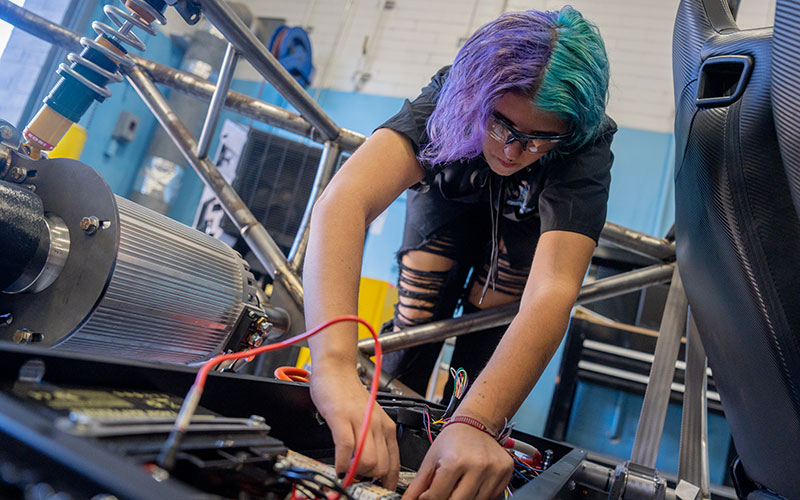 Senior Adrina Wilder works on an electric vehicle during class at Cactus High School in Glendale on Oct. 31, 2022. (Photo by Samantha Chow/Cronkite News)

GLENDALE – Most high school students begin their day behind a desk, pencils in hand. Students in Cactus High School’s automotive classes begin their day under a car, tools in hand. Some work on gas-powered cars, but others are learning to build something brand new for the school’s curriculum: an electric vehicle.

“Right now, we’ve got all the suspension done,” said Felix Ramirez, automotive instructor for 105 students at Cactus High. “We’ve got the motor in, we have the wiring harnesses for the electric motor and we’re working now on the battery compartment side of it.”

All the parts for the roadworthy EV the students are constructing this semester came from Switch Vehicles in California. The company’s Switch Lab program provides students with a build-it-yourself kit.

“What is unique about this car, it was made for schools, “ Ramirez said. “There’s a lot of labs out there, but they don’t build a car. And there’s a lot of electric cars out there that can hurt a kid.”

The kit comes with everything needed to build the three-wheeled two-seater, including the frame, wiring, battery, seats and steering components. With Ramirez’s guidance, students follow the Switch manual to assemble the vehicle.
“This is actually going to have full body panels on it, so it’s going to look a lot more closed,” said Aiden Bratton, one of Ramirez’s students. “There’s obviously no doors, but you just climb in through the window.”

From a distance, the vehicle looks like a big go-kart. Depending on the battery, it can produce 40 to 108 horsepower. All the vehicles can support 110-240 volt input, which falls in about the same range as the voltage of a standard electrical outlet. 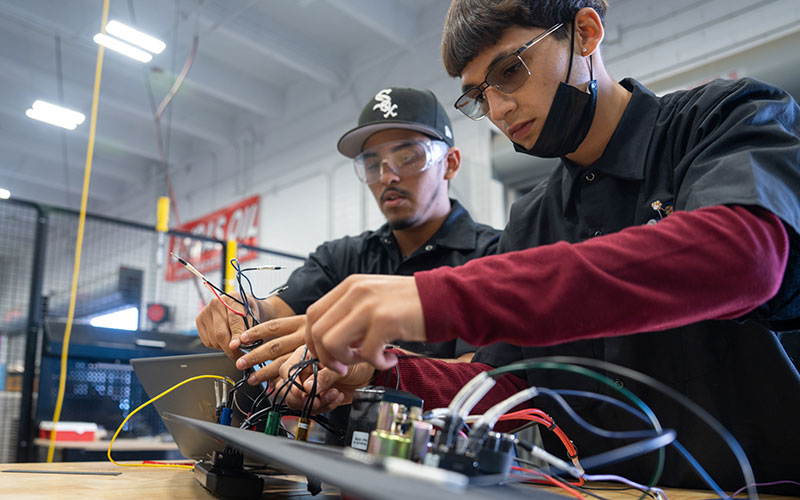 Junior David Jacquez, left, and senior Abel Graber work on the dashboard of an electric vehicle during class at Cactus High School in Glendale on Oct. 31, 2022. (Photo by Samantha Chow/Cronkite News)

Bratton has been involved in many parts of the build process. Although the work has been tough, he’s had a couple of wins along the way.

“A success was getting the steering finally put together and working because that took me forever,” Bratton said. “I probably put 48 hours into the steering because I couldn’t get it fixed.”

Abel Graber, another one of Ramirez’s students, helped build the controller unit, which maintains the energy flow from the battery and governs the vehicle’s speed.

“When you work on an electric vehicle, you have to have a lot of patience, “ Graber said. “(It’s) nothing like the gas vehicles.”

Building the EV from scratch requires a lot of brain power and organization, Graber said.

To keep all the automotive classes organized, Ramirez uses interns – students who have completed all four auto tech classes.

Bryanna Ferguson is one of Ramirez’s interns. They come from a family of car-lovers.

“My father did some drag racing for a while. He had his own car and everything,” Ferguson said. “My mom used to work on a computer all day. And my dad used to work in a parts department. So I kind of get both sides of everything. And that’s how I kind of got into it. It’s just being around it all the time.”

They arrive at the school bright and early, ready to assist students in each of the four automotive classes. 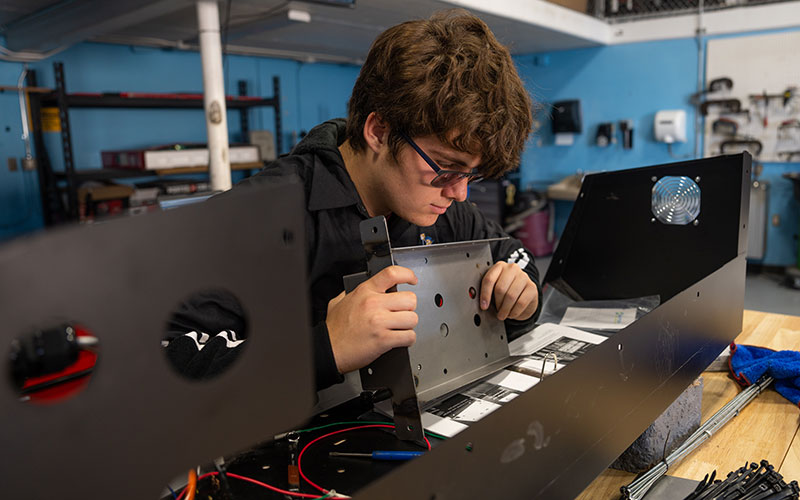 Sophomore Aiden Bratton works on an electric vehicle during class at Cactus High School in Glendale on Oct. 31, 2022. (Photo by Samantha Chow/Cronkite News)

Ramirez said many of his students also can earn Automotive Service Excellence Certificates by taking ASE tests in specific categories.

“They will also be taking ASE test certification at the student level, in brakes, electrical steering suspension,” Ramirez said. “We’re paying for the test. And the kid will graduate with at least three or four ASE Certs. when they’re done with this program.”

Currently, the tests for high schoolers are offered for standard automobile, collision repair and heavy truck certifications. Ramirez said an EV test is in the works and hopefully will be added in the near future.

“Working with the electric vehicles and the regular vehicles is good, because you get both experiences that way,” Ferguson said. “It’s not just a one-sided thing.”

Ramirez has been teaching for 36 years, 23 of them at Cactus. Around his classroom are posters highlighting some of the accomplishments of his past students. Some moved onto a four-year college while others entered the military. Seeing his students achieve their goals is what makes his job rewarding.

“My goal is to get these guys into the industry, and to get them to start doing things or go to a college,” Ramirez said. “I have a girl, this nuclear engineer, four-year auto student in the Navy. So I want them to do something, and then I’ve done my job.” 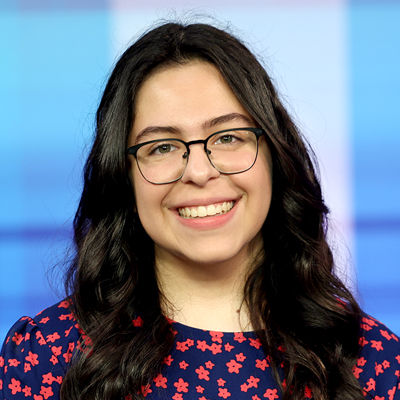