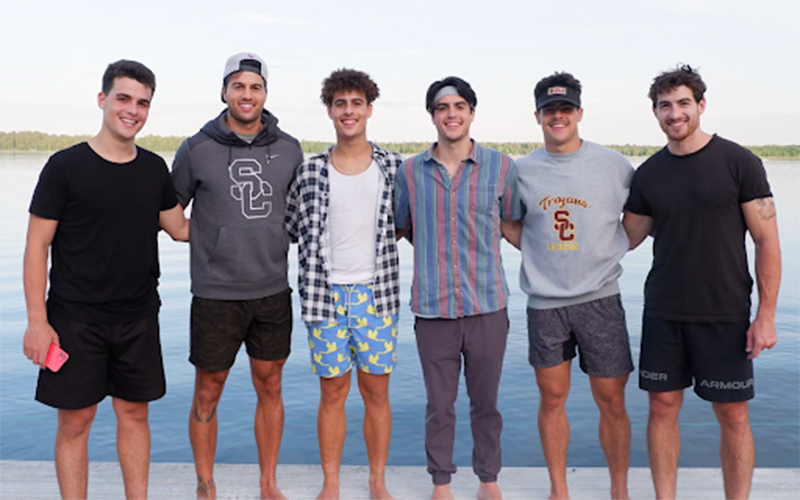 The six Koumontzis brothers share a close bond through their early hockey roots. ASU men’s ice hockey standout Demetrios Koumontzis, second from the right, has put his competitive streak on display in his final season. (Photo courtesy of Angela Koumontzis)

TEMPE – To succeed in a physically demanding sport like hockey, a player needs to own a competitive edge.

Koumontzis, a 22-year-old graduate forward for the Sun Devils, is the second-youngest of six brothers – separated by a total of nine years. Nikos, the oldest, is 29 years old. Kostas is 26, Alex 25, Marcus 24 and the baby brother, Stavros, is 20.

It’s no wonder Demetrios jokes that his family has enough siblings for a full lineup in any sport. And it’s no wonder he developed a competitive streak from an early age.

“We were always doing something very competitive,” Demetrios said. “No matter what it was, whether playing mini sticks in a living room or, like every day, we were outside playing a different sport. Just a very competitive growing-up space, and I think that helped me in hockey and every other kind of area, too. It was just a blast. I wouldn’t have wanted it any other way.”

And Demetrios’ determination and athleticism were evident early on, even to his brothers. Nikos recalls pick-up exhibition games when Demetrios insisted on playing against older kids.

“Demetrios was 8 or 9 (at the time), and the coaches told him to wait till your age group is up,” he said. “And (Demetrios) essentially said, ‘Screw that! I want to play with them.’ And he got on the ice, and he lit it up. And it was like, ‘Okay, yeah, he can hang (with them).’ It was definitely obvious that he could hold his own at a much higher level very early on.”

The family’s love for hockey originated when Demetrios’ father, Dean, was serving in a fellowship for Sports Medicine in Georgia with the Columbus Cottonmouths, a semi-pro hockey team. Dean was fascinated by hockey and admired the athleticism of players in the sport.

He wondered if his kids would like it, too. It’s safe to say that “like” was an understatement.

Such was their love for hockey, the Koumontzis family moved four times just to accommodate each of the brothers’ interest in the game and give them the opportunity to play at a more competitive level.

Demetrios, who was born in Pennsylvania, came with his family to Arizona when he was just a year old and started his hockey career playing in a house-league program.

Years went by, and the Koumontzis’ made a huge life decision – they said goodbye to the Valley and hello to “The State of Hockey,” Minnesota. The boys were ready to experience a different breed of hockey culture, and Minnesota is home to some of the best high school hockey programs in the country.

However, with new opportunities came sacrifices.

Angela Koumontzis, the mother of the six boys, moved to Minnesota with her children while her husband stayed back in Arizona to work. Dean Koumontzis commuted from Arizona to Minnesota almost every weekend to watch as many of his boys’ games as possible.

At one point, Angela and her husband lived apart for seven out of nine years.

“It was very rare that we were at something together, just because we had to divide and conquer,” Angela said. “I think there was one year of all the years that they played, that two of them happened to be on a team together.”

“I don’t know that we had a Saturday morning for 10 years,” she added, joking.

After a few years in Minnesota, the family moved back to Arizona in 2015 for educational reasons, and Demetrios joined a Jr. Coyotes travel team.

In his second year with the Jr. Coyotes Demetrios suffered a back injury that required him to wear a brace for most of the season.

With his eyes on the future, Demetrios knew that if he wanted to reach the next level in the sport, he would need more visibility against a higher level of competition. So for his senior year, he and his mom and two of his brothers returned to Minnesota so that he could play his final season of high school hockey there.

Following that impressive senior campaign, the Calgary Flames selected Demetrios in the fourth round of the 2018 NHL Draft. All of the sacrifices, the moving back and forth, the hard work and determination to succeed paid off.

“Truly a surreal moment,” Angela said. “Yeah, you make your sacrifices, and you get them where they want to be. But they have to be the ones committing to missing birthday parties, not eating the dessert and not getting to go on family trips. There was a Christmas he didn’t get to come home for and that was huge.

“Like, there are just things that you don’t get to do, either. And I know every one of his teammates has been there. But you look at all the sacrifices he’s made, it was a dream for him.”

Demetrios’ momentum continued when he was recruited to play at ASU. He had been talking to the Sun Devils since his U16 season with the Jr. Coyotes.

Not only was ASU an emerging hockey school, but it was important to Demetrios and his family that he get an education as well. He majored in communications as an undergrad and is now pursuing his master’s degree in legal studies.

Demetrios arrived at ASU at a good time. The school elevated its men’s ice hockey program to NCAA Division I status in 2016.

“Demetrios really saw it as an opportunity to do something special or to be part of something special, where he played a lot of his youth hockey (in Arizona),” Angela said. “It was so meaningful (to him), as he had offers from other schools, bigger and more prominent programs.

“And yet he just really felt that being part of something that was being built was going to be a great opportunity. But he is a very loyal person, and he’s learned a lot from being at ASU. And so it’s been really neat to see the program where it is now.”

He is currently in his fifth year playing hockey at ASU, taking advantage of the extra year from the postponed COVID season.

With ASU moving into a brand new arena in Tempe and with a ton of returning players, the decision to return for a fifth season was a no-brainer for the 5-foot-11, 190-pounder. 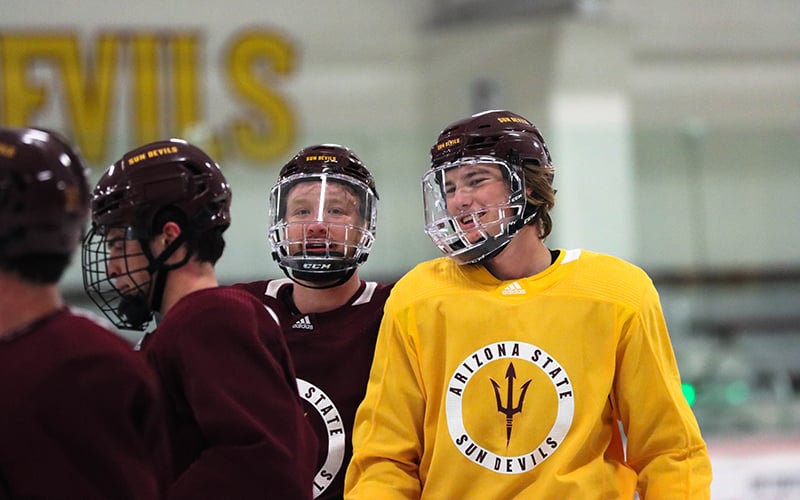 “It was just something that I didn’t want to miss out on,” Demetrios said. “I’m so happy to be back. Wearing the (ASU) pitchfork is such an honor and to wear it with this team is truly special. So that was a big part as well.”

As one of the older players on the team this season, and as an assistant captain, Demetrios hopes to be a strong influence on and off the ice to help mentor the next generation of Sun Devils.

“Hopefully I can do the same thing that the guys did for me,” he said. “I learned so much from the older guys no matter what role they were in. And I just hope I can pass that on to the younger guys here. Because that’s what matters – building this tradition, keeping that winning culture, the culture that we’ve built and I’ve been a part of for so long now.”

His teammates were ecstatic to see him come back for another year.

“He’s my roommate and we’ve been great friends for three years,” said senior defenseman Jacob Semik. “Even off the ice, as a teammate, he’s been awesome for me – mentored me all the way through when I was under him the whole way. So, he’s been awesome for this program, and we’re so happy to have him as a fifth year.”

One word the Koumontzis family uses to describe Demetrios is “resilient.”

He has dealt with his share of adversity over his college hockey career, including a bout with COVID-19 and season-ending hip surgery after playing 23 games last season.

His dedication to his game and the ASU program is evident in the way he worked himself back to full health to start the season.

This is an important season for Demetrios, not only for his team’s success but for his future.

Calgary’s draft rights expired this year, allowing him to become a free agent for the first time in his career. Wherever he ends up next season remains to be determined, but he has no regrets about his ASU career.

He started the year with six points in 14 games and ASU beat the No. 2-ranked Minnesota Golden Gophers 6-5 in overtime last weekend, a victory that had to be especially rewarding for a player such as Demetrios because of his Minnesota ties.

He and his teammates face another major challenge this weekend when they face off against the top-ranked University of Denver Pioneers.

“Hockey-wise, there’s been a lot of ups and downs with injuries and COVID – and those are all stepping stones to just being a better person and I’m truly thankful for that,” Demetrios said. “I think this is the year that we can really get something done with the team that we have, and I’m hoping I can be a big part of that.”