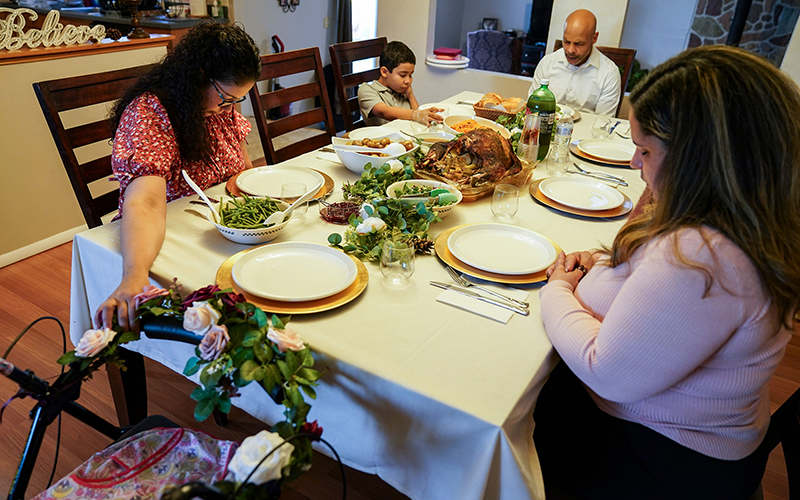 Etiquette experts say Thanksgiving is a time for families to come together – not fight over politics. But after the elections some fear that political squabbling could be part of the holiday, as more people gather post-pandemic. Here, the Zayas family of Deer Park, New York, gathers for Thanksgiving in 2020. (Photo by John Minchillo/AP/Shutterstock)

WASHINGTON – With elections barely in the rearview mirror, you can expect your Thanksgiving turkey to come with a side of your favorite controversial topics: Election security, abortion and the economy.

While Americans might be tempted to discuss politics while passing the gravy this Thanksgiving, experts remind them that food is the only thing that should be heated at the holiday dinner table.

“We usually say keep the party polite, and that goes for conversation,” said Crystal L. Bailey, director of the Etiquette Institute of Washington. “We know we’re in a somewhat divided country so if we want to have a pleasant experience and not make someone else feel uncomfortable, we would want to stay away from the topic of politics.”

That sentiment is shared by nearly two-thirds of Americans, who told pollsters at Quinnipiac University that they hope to avoid the discussion of politics while visiting family and friends this Thanksgiving. In the same poll, taken last week, 31% of people said that politics in the U.S. over the last year have made it harder to discuss politics with family and friends.

But Bailey said it’s getting harder to avoid politics in an age where we “are bombarded with the news, whereas before, maybe we were just checking the paper.” With the divisive politics of recent years, a constant news cycle and televisions that are often tuned to a network on one end of the political spectrum or the other, Bailey said everyone has an opinion they want to share.

“So it’s very present for individuals. The topic of politics hits on so many core issues, even when we start thinking about the cost of a Thanksgiving dinner that might bring to mind politics,” Bailey said.

Her advice: Don’t do it.

That was echoed by SueAnn Brown, founder of It’s All About Etiquette in Scottsdale. But if heated conversations cannot be avoided, Brown and Bailey have tips to lower the temperature.

They said Thanksgiving hosts can help set the tone for the rest of the night. If ground rules are not set before sitting down to dinner, it is possible the conversation might veer into politics.

“Let’s say I was the host, I would say, ‘Thanksgiving is a time for us to be together and I don’t really want to be talking about politics at the table,'” Brown said. “You have to put it out there and hopefully they will not do that.” 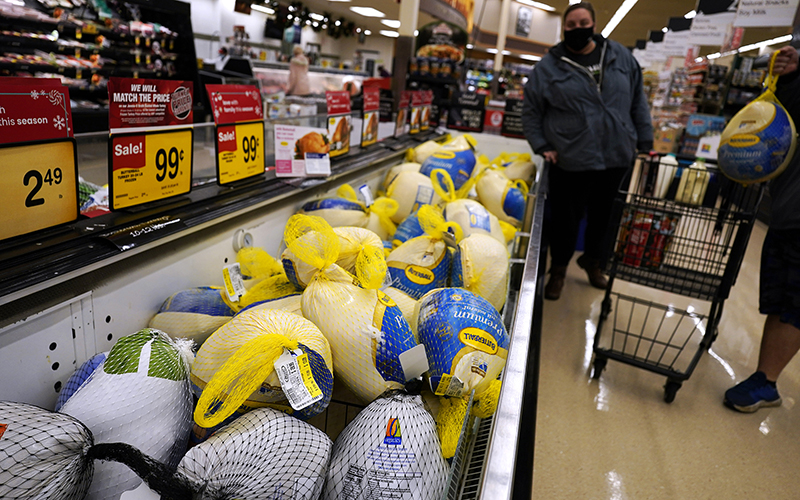 But when the Second Amendment uncle is sitting across from the abortion-rights cousin, there are ways for a host to reel in the conversation when they get into it. The etiquette experts said the key is to try pivoting the conversation to safer topics.

“You have to go ahead and redirect the conversation and maybe ask them another question, like, ‘Well John, let’s talk about your trip to the Grand Canyon over the summer, how was that?'” Brown said.

Bailey offers F-O-R-D – family, occupation, recreation and dreams – as a memory device for safe topics that can keep the conversation civil over dinner. If none of those work, she said hosts can steer the discussion to other topics, including sports, vacations, and food.

“There’s all kinds of topics you can talk about other than politics,” she said.

Experts suggest avoiding any topic, like personal finances, that could unexpectedly segue into politics.

But if political discussion cannot be avoided, Bailey suggests listening and having an open mind. Political conversation that can be had without becoming combative, can make for a more pleasant Thanksgiving meal, she said.

“They’ve made a point and we can let them know that it’s an interesting point or it’s good to hear a different side and then maybe leave it at that,” Bailey said. “We can have dialogue and we should be able to in a civil manner.”