Arizona voters made it harder for state lawmakers to change voter-approved ballot measures with the Voter Protection Act in 1998, but Proposition 128 on this fall’s ballot would make it easier for the Legislature to change voters’ actions. (File photo courtesy of Maricopa County Elections Department)

WASHINGTON – Arizona voters approved the Voter Protection Act in 1998 with the goal of making it harder for state lawmakers to undo what citizens approve at the ballot box.

Some officials think it’s too hard.

They’re pushing for Proposition 128, which would make it easier for the Legislature to amend voter-approved measures that are later found to have legal flaws. Supporters call it a commonsense and “narrow amendment to the Voter Protection Act so that the Legislature can fix measures that have broken illegal language.”

But opponents say there’s nothing commonsense or narrow about the proposition. They call it a direct assault on the Voter Protection Act that “just reeks of trying to upend democracy.”

“When you see the scales being tipped to make it so the Legislature has more power than the actual voter, it becomes very, very concerning,” said Marisol Garcia, president of the Arizona Education Association.

Proposition 128, introduced by Sen. Vince Leach, R-Tucson, would amend the state Constitution to make it easier for lawmakers to divert funds from or make changes to voter-approved initiatives later found by the state or U.S. supreme courts to have unconstitutional language.

Currently, lawmakers can only make changes to ballot measures if three-fourths of the Legislature agree and only if the change “furthers the purposes of such measures.” Under Leach’s proposal, such a change could be made with a simple majority once a court determined it contained “illegal or unconstitutional language.”

“This definitely is an effort by the legislature to exercise greater control over initiatives … making them more vulnerable to manipulation if any part of it has been invalidated by the state Supreme Court,” said Stefanie Lindquist, professor of law and political sciences at Arizona State University.

Voters in Arizona have an easier time of directly enacting laws than those in most other states: The National Conference of State Legislatures said Arizona is one of 11 states where voters can place initiatives directly on the ballot for both statutory and constitutional issues and demand a popular referendum.

That makes the state attractive to out-of-state interest groups, which was never the intent of the state’s constitutional framers, said Suzanne Kinney, CEO and president of the Arizona chapter of the Commercial Real Estate Development Association.

“When something gets on the ballot here, if it’s successful, it often shows up in other states, so we’re kind of a testing ground,” Kinney said. “I doubt they envisioned it working out this way.”

Kinney’s group was one of 11 to submit statements in support of Proposition 128, along with the Arizona Free Enterprise Club and the Center for Arizona Policy Action, among others. 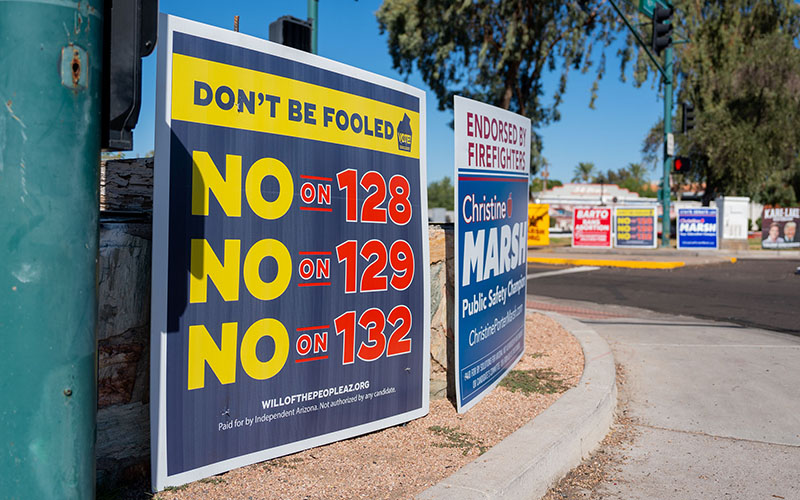 Proposition 128 is one of three ballot measures, backed by lawmakers, that critics say threatens voters’ ability to enact laws at the ballot box. The proposal would make it easier for lawmakers to change voter-approved ballot measures. (Photo by Samantha Chow/Cronkite News)

Aimee Yentes, vice president of the Arizona Free Enterprise Club, said in her written statement that with ballot propositions “thrown together by out-of-state special interest groups,” they often include language that does not conform with Arizona’s Constitution. She pointed to Proposition 208: Approved by voters in 2020, it would have raised income taxes on high earners to fund the state’s schools, but was later ruled unconstitutional by state courts.

Garcia thinks the success of Proposition 208 is the real reason for Proposition 128 – not to preserve voter-approved initiatives, but to prevent them.

It was not long after that vote, in February 2021, that Leach introduced the legislation to put Proposition 128 on the ballot. It passed the House and Senate on party-line votes.

Meanwhile, the Goldwater Institute sued, claiming that a simple majority of voters could not approve a higher tax through the Invest in Ed Act, since Arizona’s Constitution requires a supermajority for the Legislature to pass a tax. A Maricopa County Superior Court judge agreed and overturned the initiative in March 2022. 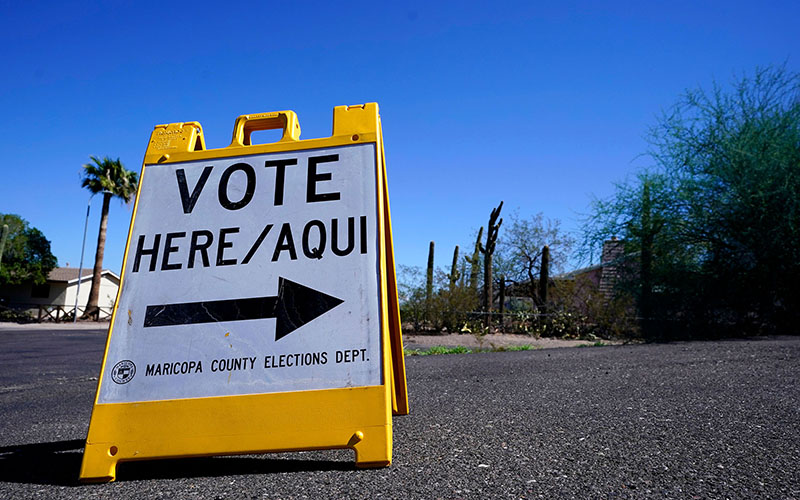 Garcia said that if Proposition 128 had been in place, it could have fast-tracked that process, making it easier for lawmakers to overturn measures whenever they want.

Francisco Pedraza, associate director of the Center for Latina/os and American Politics Research, said the proposition could lead to a “slippery slope situation,” with legislators intervening even before the courts step in.

Along with Pedraza and Garcia’s groups, others on record opposing Proposition 128 include One Arizona, the League of Women Voters of Arizona and small business owners.

Kinney said her organization spoke up for Proposition 128 over concerns that some voter initiatives could hurt the state’s pro-business image.

“It’s important to our members to have the most attractive environment to attract new businesses here,” she said. “Unfortunately, a number of the measures we’ve seen, funded from out of state, would make the business environment less attractive.”

But Garcia said it is not the out-of-state interests that will be hindered by Proposition 128 as much as it is the voters in-state.

“In our minds, these are direct pushbacks to us having a majority of voters wanting something, and 31 folks in the House and 16 people in the Senate not agreeing with it,” she said.