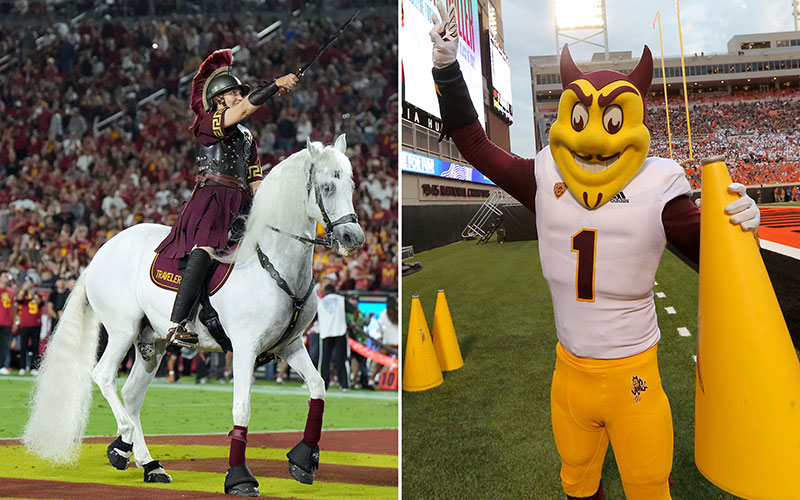 The University of Southern California’s football team rallies behind its mascot, the Trojan warrior astride his white steed, Traveler. ASU will need more than stalwart support from Sparky to pull off an upset Saturday in the LA Coliseum. (Photos by Kirby Lee/USA Today Sports, left, and Bryan Terry/The Oklahoman/USA Today Network)

LOS ANGELES – Right about now, Arizona State University may be wishing it had a desert version of the Trojan horse.

Sun Devil football is facing stiff odds in its matchup Saturday with the University of Southern California at the LA Memorial Coliseum.

The Trojans, led by head coach Lincoln Riley, are ranked sixth in the Associated Press and Coaches polls going into the Week 5 Pac-12 bout. ASU is miles from being ranked in either poll.

“I don’t expect ASU to win, to pull off an upset is pretty improbable, but I do think that ASU can come out of the Coliseum feeling pretty good about themselves,” said Brad Denny, who covers Sun Devils football for 3TV/CBS 5 in Phoenix.

ASU is coming off a 34-13 conference loss to Utah at home. The Devils had only had six rushing yards on 20 attempts, and converted only three out of 11 third-down plays, a horrendous 27% rate, according to ESPN. ASU trailed the whole game.

To win Saturday will require a major upset. The Trojans come in as 26.5 point favorites with a 93.7% chance of winning, Sports Illustrated reports.

But a loss to USC doesn’t mean the team isn’t achieving some minor victories of its own, Denny said.

“As long as we can see some incremental growth on the offensive side of the ball,” he said, “get (quarterback) Emory Jones out there and utilize that dual-threat ability, call some designed runs, be more creative and dynamic in terms of pace of offense and getting the ball to playmakers, I think that can bode well when they come back home to play Washington.”

“We were definitely behind the chains,” he said. “I thought we didn’t take advantage of our first downs, to give them a shot on second-and-five’s or less. We were not predictable. I thought that Utah’s defense was able to pin their ears back and come at us.”

Aguano expressed hope the offense can start rolling the chains.

“We will be able to elongate the series and we will be successful as well.”

With its 1-3 start and the sudden departure of former head coach Herm Edwards, ASU faces the hardest stretch of its schedule. After USC, the Sun Devils will play Washington.

USC has one of the stronger defenses in the Pac-12, boasting 14 sacks over four weeks and keeping all opponents’ combined third-down conversion rate below 40%, allowing only 18 out 51 attempts.

By comparison, Utah has nine sacks so far this season, including five against ASU.

Protecting the quarterback is a major concern for ASU, which lacks a strong offensive line.

“One of the primary issues of any offense that struggles on third down is you find yourself in those third-and-long situations where you’re not able to have any success on those first and second downs,” Denny said. “Obviously when you are getting blown off the ball the way ASU was, it makes running the ball difficult.”

ASU has a proven running back in Xazavian Valladay, who ran for 3,281 yards and 19 touchdowns on 626 carries over four seasons with the Wyoming. He finished as the Cowboys’ all-time second-leading rusher.

Now, Valladay is in his last year of eligibility with the Sun Devils and could help ignite an explosive rushing offense. When it comes to that offense, Denny said, “the ability is there I just think it’s become an issue of play calling. It might take awhile to shake off the Herm Edwards-era conservatism in terms of the offensive approach.”

Edwards stepped down two weeks ago under a mutual decision reached after ASU’s embarrassing loss to Eastern Michigan.

Aguano, who had been running-back coach, is one of the most decorated coaches in Arizona high school football history.

With these fresh faces, Denny said, the timid Herm Edwards approach needs to change when the Sun Devils take on the Trojans.

“Aguano needs to work with Glenn Thomas more and open up the playbook and find some things that his players do well,” he said. “They need to be more dynamic and more creative in the play calling.”

He said ASU showed it has worked before. In its opener against Northern Arizona University and its only win of the season, ASU effectively used first-down passes to power the team’s best offensive showing of the season.

It leaves open the question of whether the Sun Devils will want to take more risks with first-down opportunities in order to compete at the Coliseum and leave with some momentum and dignity.

If it does and its strategy succeeds, the Sun Devils may finally have shown they have that Trojan horse of their own. 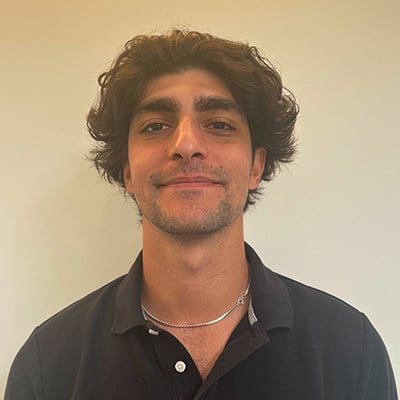