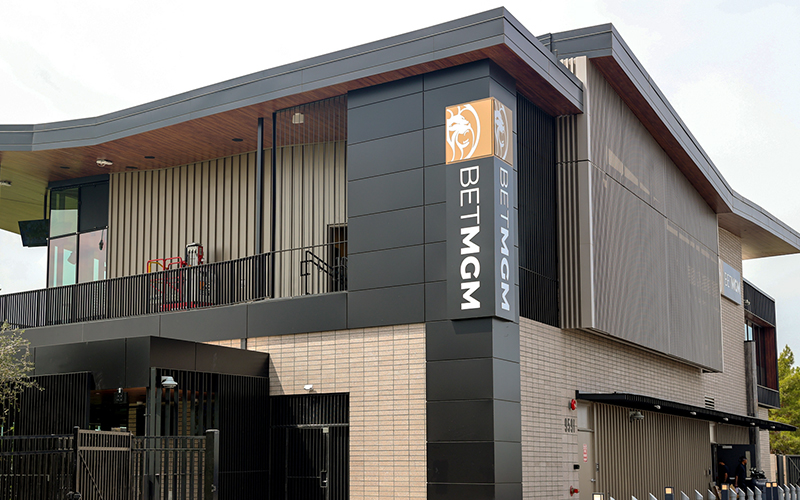 The BetMGM Sportsbook next to State Farm Stadium in Glendale will provide opportunities to gamble on sports for residents in the West Valley. (Photo by Austin Ford/Cronkite News) 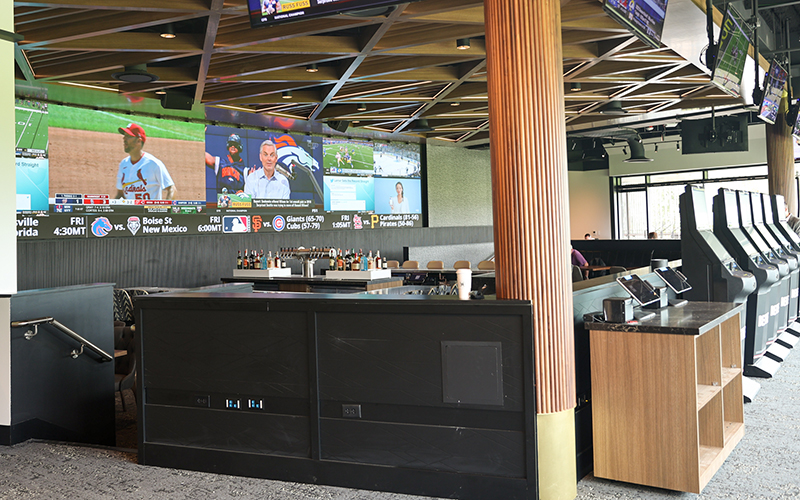 The BetMGM facility next to the Cardinals’ stadium will prove to be the first on-site gambling parlor at a Super Bowl when the game comes to Glendale on Feb. 12, 2023. (Photo by Austin Ford/Cronkite News) 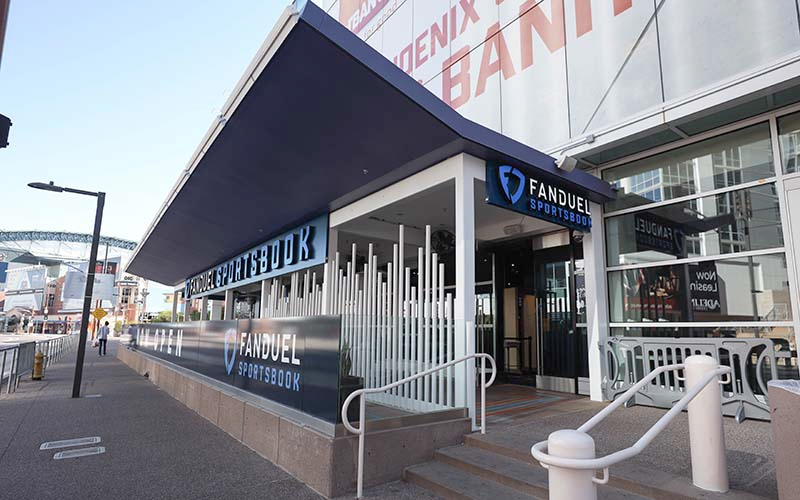 The FanDuel Sportsbook at Footprint Center draws a lot of foot traffic in downtown Phoenix as well as visitors coming to sporting events at the arena. (Photo by Susan Wong/Cronkite News) 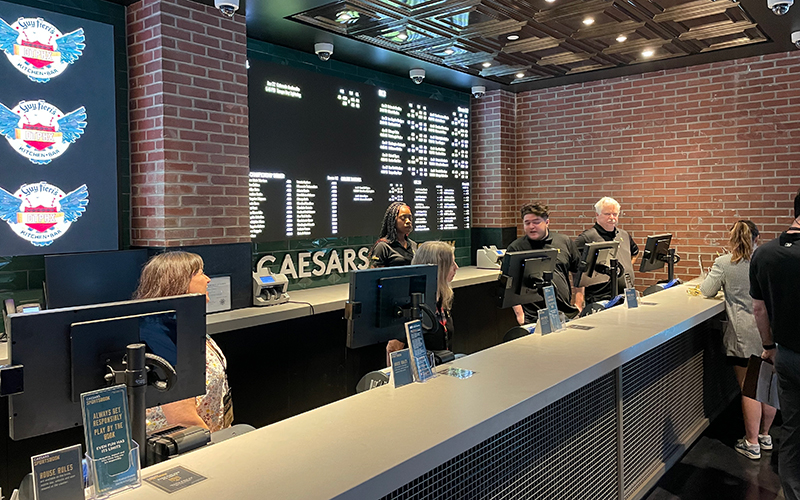 Caesars Sportsbook at Chase Field is the largest sportsbook at a stadium or arena in the United States. (File photo by Austin Green/Cronkite News)

PHOENIX – Exactly one year ago, the flood gates opened. Arizona legalized sports betting for the first time outside tribal gaming on Sept. 9, 2021. For many, the amount of money generated has been jaw-dropping.

In the state’s first full year of gambling, more than $5 billion was wagered. By most accounts, Arizona has more than met expectations in its inaugural stage.

“A year ago, I was thinking maybe if the state is lucky, it might at some point this year hit $500 million for wagers in a single month,” said Chris Boan, lead writer for BetArizona.com. “And it’s hit that number three times, and two other months it was above $490 million and was within an eyelash of that $500 million benchmark.

“So I think the state has performed better than, I would think, anyone really would have expected.”

If there were any qualms about legalizing sports betting in Arizona before last September, they have mostly dissipated. Even with Arizona’s early success, the state hasn’t maximized its potential profits.

Maxwell Hartgraves, a public information officer for the Arizona Department of Gaming, said legalized sports betting has been a positive for the state.

“Just from privilege fees and licensing fees we’ve had over $30 million contributed to the state general fund, so that is definitely a positive from sports betting and fantasy sports,” Hartgraves said. “Not to mention new employees, new companies coming into the state.”

Additionally, Arizona’s tax rate on sports gambling is 8% for retail revenue and 10% for online.

Arizona could also make even more money by giving additional licenses to more tribes as they are already the major contributor for the state. Limiting it to 10 licenses not only takes away potential cash for the state general fund but also limits the opportunity for the tribes to maximize gambling profits.

Then again, the tribes aren’t short on gambling money.

“Tribal gaming, for example, contributes over $100 million to the state,” Hartgraves said. “Sports betting and fantasy sports is not immediately at that level.”

Rather than resting on its laurels with the money generated from the tribal side, some observers think Arizona should do what it can to maximize the profits even more. Part of what has made Arizona so successful in just one year is the state’s approach to sports betting, said Brendan Bussmann, managing partner of B Global.

“Arizona offered a unique model and sort of advanced on two fronts,” he said. “One that tribes would be considered on a commercial level to go statewide. And then introduced the ability for teams to have direct access to licenses in a combined format. Looking at it now a year later, I think the market continues to be a success.”

A large reason for this success is the mobile betting market. Retail sports betting reaps a few million dollars wagered every year, but it doesn’t come close to the amount wagered through mobile.

In March, the most popular month for sports betting, bettors wagered more than $690 million in Arizona. Of that, only $3.3 million came from retail gambling.

Some states, like Nevada, have a much larger share of wagers from retail due to certain rules regarding in-person betting. It helps that Las Vegas is the casino capital of the nation. But Arizona has no such requirement and thus gets a significant proportion from online bets.

With all of the success from Arizona’s first year of legalized sports betting, it’s a wonder it took so long to become legal in the first place. On the surface there doesn’t seem to be much downside – outside of the challenging efforts to legalize gambling.

“It’s a very tumultuous process. Sometimes it takes a while to get gaming done in a lot of states and it goes to show you, you’ve gotta continually work at it to get over the finish line,” Iden said.

In election years, getting legislation through is understandably more difficult, which is why Iden believes that Arizona’s success can pave the way for more states to legalize sports betting in 2023.

“I envision we’re gonna have a lot of success in 2023,” Iden said, “and I think it’s gonna be a very busy year for gaming legislation across the country.” 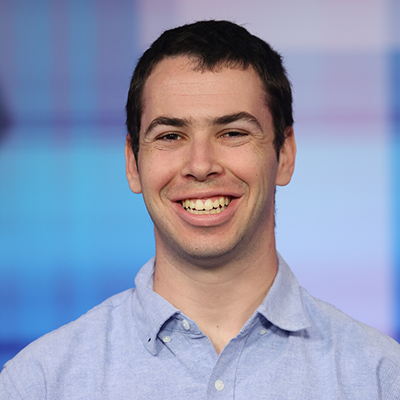 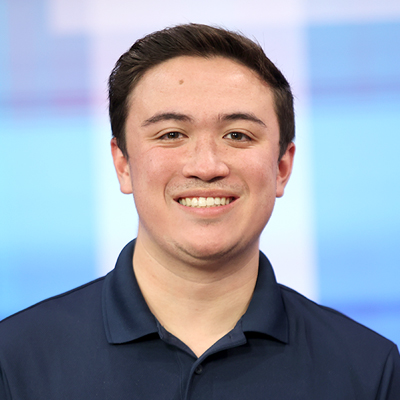 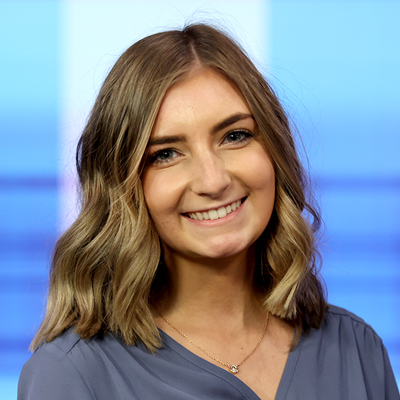 Payton Major expects to graduate in May 2023 with a bachelor’s degrees in broadcast journalism and meteorology, as well as certificates in GIS and atmospheric sciences. Major has interned with CNN Weather and MadridMedia and works for WeatheRate and the Arizona Climate Office.