By 7:30 a.m., sports fans and gambling fans lined up outside the Diamondbacks’ field, waiting to marry their two passions. Once one lucky fan placed the first bet at one of the five temporary betting windows, legalized sports gambling in the state finally became the norm.

The festivities continued later in the afternoon at Footprint Center as the Suns heralded the advent of live sports betting, while Phoenix Raceway in Avondale readied for its own historic moment.

Sports gambling has already been legalized in 25 states plus the District of Columbia. Arizona joined them today when sports betting operations officially and theatrically opened for business. The state’s professional teams upped the ante by announcing sports betting partnerships with companies like Caesars Sportsbook, FanDuel and Barstool Sportsbook.

It was a long time coming. After “five years in the making” sports betting in Arizona is officially legal, Arizona Gov. Doug Ducey said. Ducey signed the bill into law in April after state legislators approved it.

“Here we are and Phoenix is one of the fastest growing cities in America,” former NBA player Richard Jeffereson told a giddy crowd as FanDuel Sportsbook launched at the Footprint Center, home of the Suns, Phoenix Mercury and Arizona Rattlers football team.

Jefferson and Channing Frye, both retired Suns players, joined Ducey and other Valley luminaries at the downtown arena to mark the momentous day. The hoopla was followed by a watch party for the NFL season opener between the Dallas Cowboys and the Tampa Bay Buccaneers, the perfect backdrop for gamblers and sports fans alike.

Earlier in the day, the Diamondbacks were the first MLB team to open a sportsbook after the team partnered with Caesars Sportsbook, which has plans to convert the Game Seven Grill into a 20,000 square-foot sportsbook, restaurant and sports bar. Luis Gonzalez, the Diamondbacks legend, was on hand to help place the first ceremonial bets for charity. 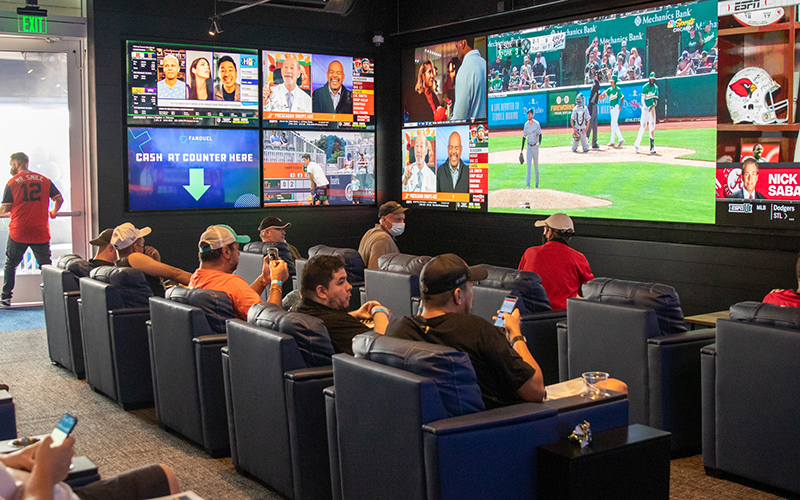 The FanDuel Sportsbook at Footprint Center attracted fans interested in betting on games during the first day of legalized sports betting in Arizona. (Photo by James Franks/Cronkite News)

“There’s a lot of people that have been asking us to help legalize sports gaming,” Arizona Diamondbacks President and CEO Derrick Hall said. “It’s been taking place anyways. Those that want to gamble, they’ve found ways to gamble. Now we can collect the data, control the data, we can watch it, have safeguards for responsible gaming, and we can collect revenue for the state, too.”

The partnership with Caesars Sportsbook is based on the premise of responsible gambling.

“We’re gonna have to do our part in making sure that we promote, that we educate, that we do it responsibly, that we protect the integrity of our sport and of our industry,” Hall said.

Other possible ways to promote responsible sports betting are to remove or limit alcohol advertisements in stadiums, Wingo said.

Game Seven Grill outside of Chase Field will be renovated into a 20,000 square-foot sportsbook and open to the public by early 2022, according to David Grolman, senior vice president of operations at Caesars Retail.

Grolman runs over 170 sportsbooks across the United States, but he says the book at Chase Field will be completely different from all other books.

“U.S. sportsbooks typically are part of a casino, where you have that built-in gaming environment already,” Grolman said. “We have to build that into the new sportsbook.”

The book additions to Chase Field and Footprint Center will not change the culture of Arizona, Ducey said.

“Arizona is not Las Vegas, and with the modernization of this gaming compact, we’re not going to be Las Vegas,” Ducey said. 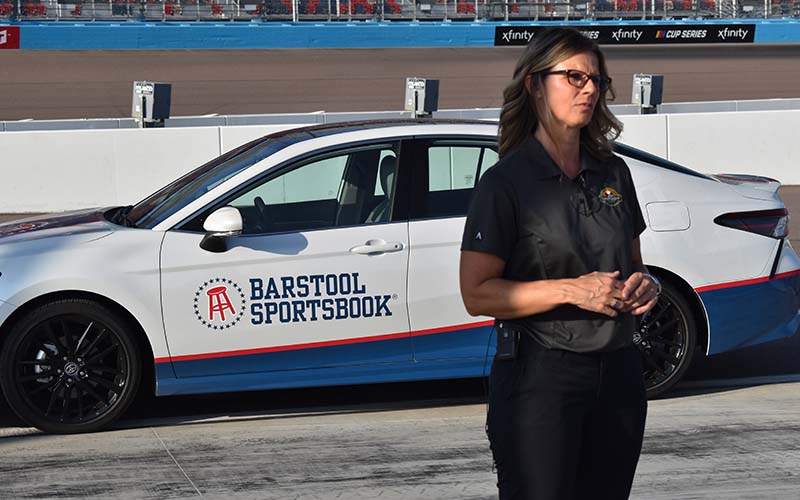 Julie Giese, president of Phoenix Raceway, said the track is excited about its relationship with Barstool Sportsbook. (Photo by Nicholas Zeller-Singh/Cronkite News)

In Avondale, Phoenix Raceway embraced the state’s new gambling laws, partnering with Barstool Sportsbook. According to Jon Kaplowitz, Senior VP of Penn Interactive, Barstool Sportsbook proved it can be a market leader for NASCAR because of a combination of unique offers and a leading mobile experience.

Although Barstool Sportsbook is new to the desert, Penn National Gaming has already made an impact in NASCAR.

“NASCAR has a longstanding relationship with Penn National Gaming,” said Julie Giese, president of Phoenix Raceway. “We have a larger program with them from the NASCAR perspective and knew each other and the potential of that partnership, so we are excited to have them.”

Tim Clark, NASCAR’s Chief Digital Officer, is also excited about the partnership with Phoenix Raceway and Penn National Gaming because of the potential benefits.

“As our first authorized gaming operator, Penn National has been invested in engaging NASCAR fans since we began building our position in the sports betting space,” Clark said.

Although NASCAR does not travel to Arizona until November, Giese and her staff look to use the new gambling laws to engage with sports bettors across the state.

“We use sports betting as a way to increase fan interest, engagement, and reach out to new demographics,” Giese said. “It might be somebody that is younger or a diverse audience. For us, we just want to continue to provide an open environment for everybody and this is a way to get their interest.”

Phoenix is ranked ninth in the top 25 for NASCAR fan base markets, according to 2019 Neilsen ratings. The new sports betting laws could give Phoenix Raceway a bump.

“It allows us to expose NASCAR and Phoenix Raceway to a new audience,” Giese said. “Ultimately, someone who learns about NASCAR would want to come out to a race or the track and experience what it is all about.”

Even though Phoenix Raceway will take part in Arizona’s new sports betting laws, the track does not expect in-person betting soon.

“For championship weekend, most of the betting will be done virtually at this point.,” Giese said. “We are working on some sort of on-site retail location, but for this November, everything will be virtual.”

However sports betting evolves in the Valley, Phoenix Raceway and NASCAR are eager about the partnership’s future.

“We couldn’t be more excited to provide our partners with access to our passionate fan base in the greater Phoenix market,” Clark said. 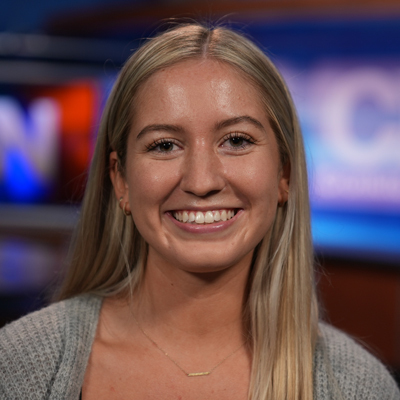 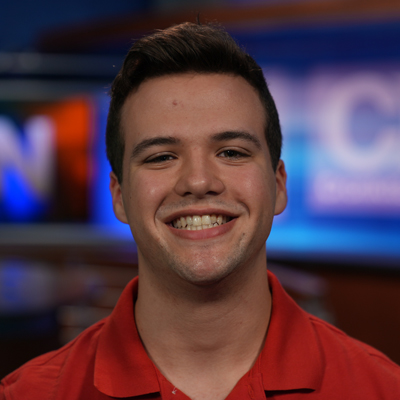 Kam Dyer expects to graduate in December 2021 with a bachelor’s degree in sports journalism and a minor in sustainability. Dyer, who has interned at KXAN in Texas and written for the State Press, is working in the Phoenix Sports Bureau. 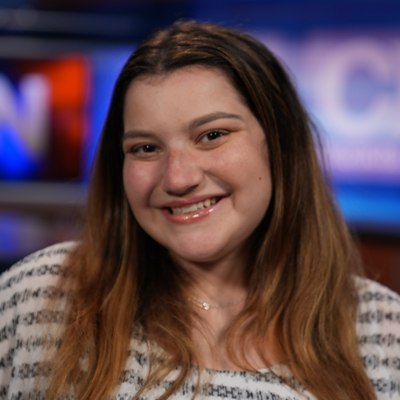 Mallory Schnell expects to graduate in December 2022 with a bachelor’s degree in sports journalism and a certificate in sales and marketing. Schnell, who covered the NHL Florida Panthers while interning with the South Florida Sun Sentinel, is working in the Phoenix Sports Bureau.