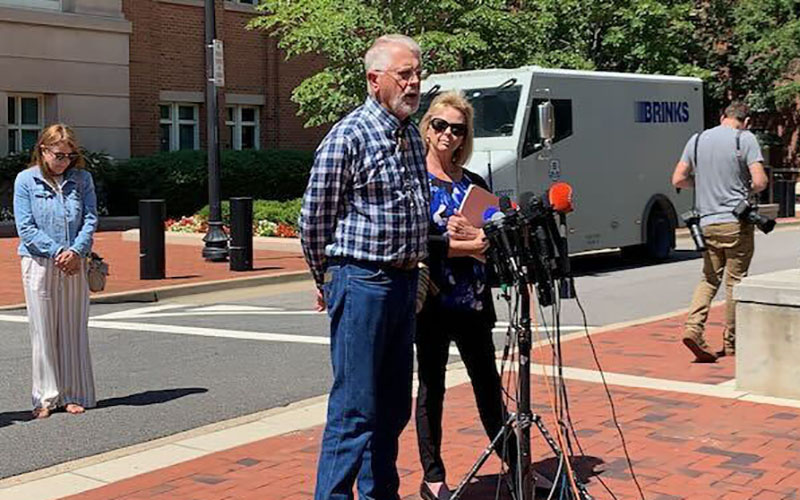 Carl and Marsha Mueller speak outside the federal courthouse in Alexandria, Va., where El Shafee Elsheikh was sentenced for his part in the kidnapping and murder of their daughter, Kayla, in Syria in 2015. (Photo by Ryan Knappenberger/Cronkite News)

Marsha Mueller puts a hand on husband Carl’s shoulder during a 2020 ceremony in Arizona honoring their daughter, Kayla, who was held hostage and killed by Islamic State terrorists in 2015. (Photo by Rob Schumacher/POOL/The Arizona Republic via USA TODAY NETWORK)

ALEXANDRIA, Va. – A second ISIS militant was sentenced to life in prison Friday for the kidnapping and killing of Prescott native Kayla Mueller, a relief to her parents who pledged to continue fighting for her memory.

“Now we can set this behind us,” Carl Mueller said outside the U.S. District Court in Alexandria, Virginia, where El Shafee Elsheikh was sentenced for crimes the judge called “horrific, barbaric, brutal, callous and, of course, criminal.”

Mueller, a 26-year-old humanitarian aid worker, was working with Syrian refugees in southern Turkey when she took a work-related trip for Doctors Without Borders in August 2013 to Aleppo, Syria. It was there that she was taken captive by ISIS fighters and held hostage for 18 months until her death in 2015.

Elsheikh, a British national, was part of a trio known by hostages as the “ISIS Beatles” for their British accents. One of them, Alexanda Amon Kotey, was sentenced in April to life in prison for his part in the death of Mueller and other hostages. The third, Mohammed Emwazi, was killed in a U.S. airstrike in 2015, according to Justice Department documents.

Elsheikh was convicted by a federal jury in April on eight counts of hostage taking, conspiracy to commit murder and conspiracy to provide resources to terrorist organizations. The Justice Department said Elsheikh was the highest-ranking ISIS member to face a jury trial.

In addition to Mueller, Elsheikh and his accomplices kidnapped and executed three other Americans: James Foley, Steven Sotloff and Peter Kassig. Friday’s trial came on the eighth anniversary of Foley’s beheading, which was recorded and released by ISIS as a propaganda film.

Prescott resident Kayla Mueller was 26 when she was killed in Syria in 2015, after being taken hostage by ISIS in Syria in 2013. (Photo courtesy CNN)

Evidence presented at trial showed that Elsheikh and the other “Beatles” beat, threatened and tortured the hostages. Foley, Sotloff and Kassig were placed in a single cell and forced to fight each other, with the loser waterboarded, according to court documents.

Evidence also showed that Mueller was held in a cell the size of a dog kennel and sexually assaulted by Abu Bakr al-Baghdadi, the former leader of the Islamic State.

At sentencing, prosecutors read aloud from letters the hostages sent home to their families, including a handwritten note from Mueller that her family received after other hostages were released from captivity.

At a news conference after sentencing, Mueller’s mother, Marsha, expressed her frustrations with the government and its handling of her daughter’s capture.

“The government has its hands tied,” she said, adding that it is necessary to “find some way to work outside the government to get hostages released.”

Elsheikh will serve eight life sentences concurrently without chance of parole. He has asked for an appeal, but will be held in the meantime by the Bureau of Prisons, which will determine where to place him.

Elsheikh, wearing a green prison jumpsuit and a facemask in court, showed little response during the sentencing hearing and he declined opportunities to speak. Carl Mueller said he “spent most of the time staring at the back of his head in the courtroom.”

Kayla Mueller's parents speak, as ISIS fighter is sentenced in her death

“He got a fair trial, which is such a contrast to the way they treated their hostages,” Hoffman said.

In a June 10 article for the Council on Foreign Relations, Hoffman wrote that the trial “showcased America at its very best: responding to unspeakable horror and unimaginable evil with patience and the protection of a defendant’s human rights.”

U.S. District Court Judge T.S. Ellis III, the judge in both Elsheikh’s and Kotey’s trials, echoed Hoffman as he delivered the sentence.

“(This case) is a significant episode in the history of our country,” Ellis said from the bench. “It must stand as a beacon, a warning to others.”

“In order to deter violent crimes like international kidnapping, torture, and execution of American citizens, we must have accountability. We must have justice,” she said. “With today’s verdict, justice has finally been served.”

Carl Mueller said he felt a sense of relief, both in seeing Elsheikh sentenced and in being finished with the trial. But he stressed that there is still more work to be done for other hostages and for the memory of his daughter, whose remains have yet to be found.

Both Muellers said that they felt the government had learned from the murders of Kayla and the other hostages, and hoped the tragedy could be avoided in the future. But they described it as a bittersweet feeling.

“They definitely have learned their lesson and our children were the cost,” Carl Mueller said.