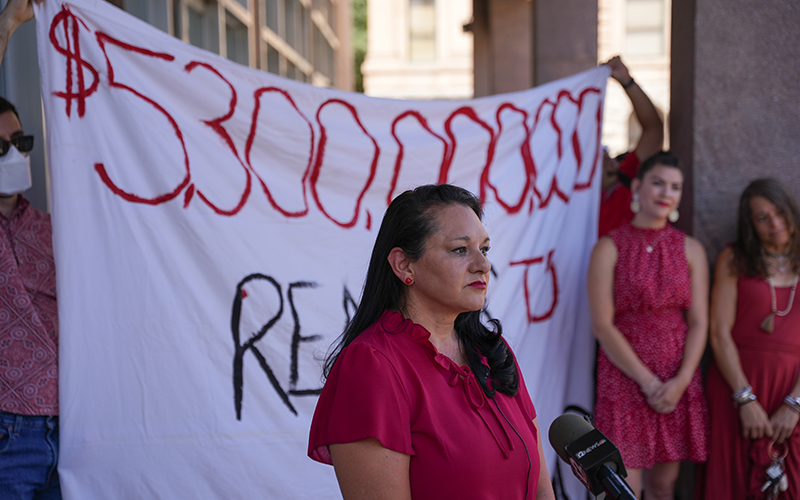 Marisol Garcia, president-elect of the Arizona Education Association, speaks at a rally in front of the Arizona Senate in Phoenix on June 21, 2022. (Photo by Troy Hill/Cronkite News) 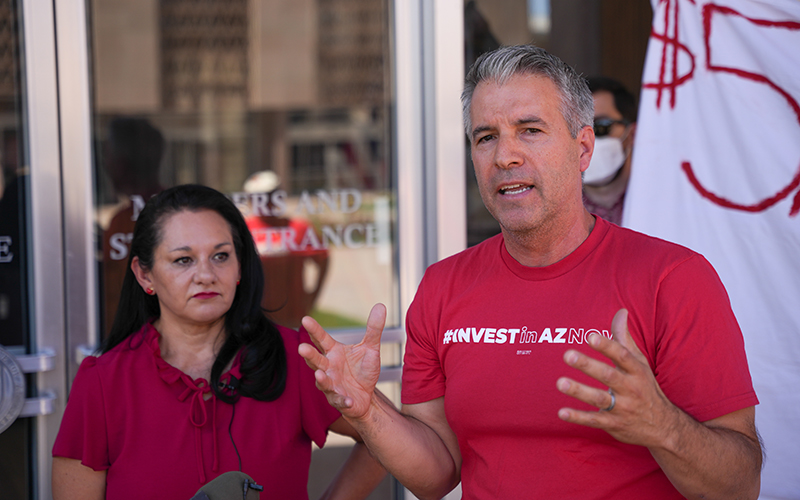 Randy Parraz, executive director for the Arizona Education Association, and Marisol Garcia, incoming president of the association, take part in a rally in front of the Arizona Senate in Phoenix on June 21, 2022. (Photo by Troy Hill/Cronkite News) 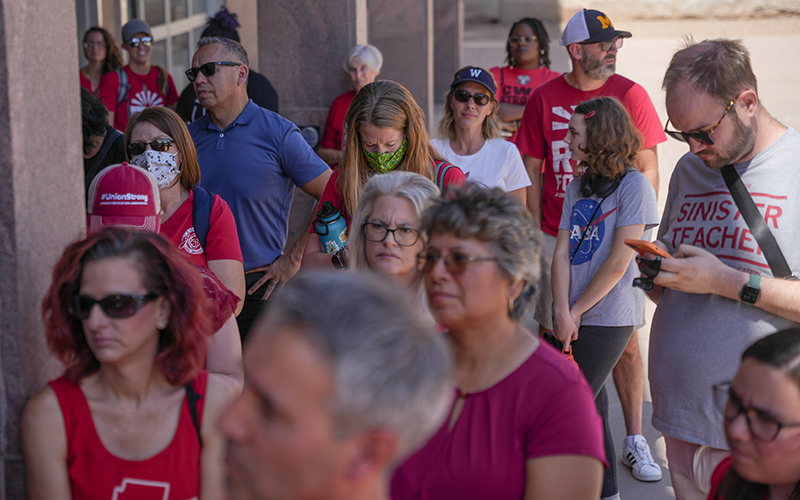 A group of people at the Arizona Education Association rally outside the Arizona Senate in Phoenix on June 21, 2022. (Photo by Troy Hill/Cronkite News) 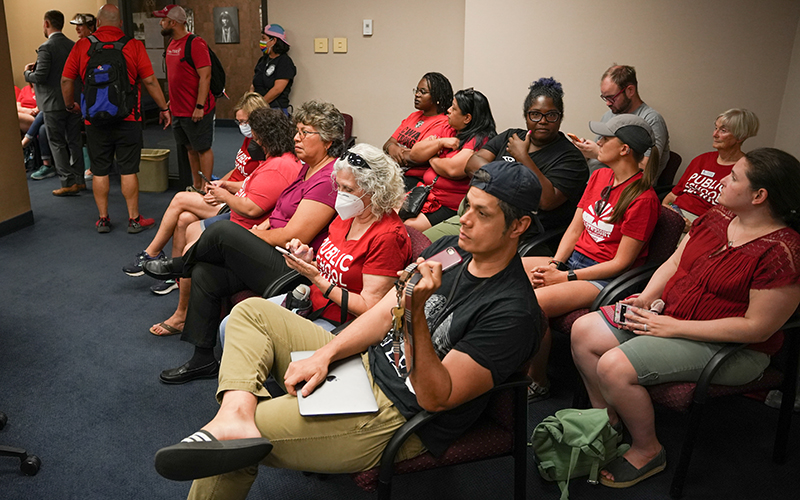 Arizona Education Association members await the start of a Senate Appropriations Committee hearing at the state Capitol in Phoenix on June 21, 2022. (Photo by Troy Hill/Cronkite News) 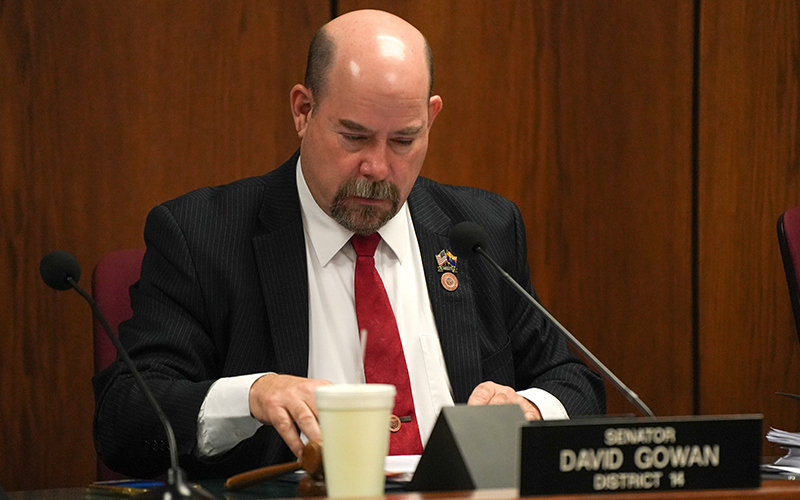 Sen. David Gowan, chairman of the Appropriations Committee, prepares for a hearing at the Arizona Senate in Phoenix on June 21, 2022. (Photo by Troy Hill/Cronkite News)

PHOENIX – Members of the Arizona Education Association gathered Tuesday at the state Capitol to again ask lawmakers to funnel a bigger chunk of the state’s $5 billion budget surplus into public schools.

Marisol Garcia, president-elect of the organization, which represents more than 20,000 public school employees, blasted legislators for worrying about “impending economic impacts, when we know the economic impacts are hitting us right now in the classroom.”

“Educators are … running to other states where we know they can get paid a livable wage,” she said.

In its proposed Educators’ Budget, the association calls for $1.2 billion in funding for fiscal year 2023, with an additional $447 million in one-time spending on bonuses, facilities and broadband internet.

On Tuesday, the House Appropriations Committee, by a vote of 8-5, advanced an education budget bill that would increase per pupil spending by 7.9%. Nevertheless, the education association said that falls short of what schools need.

Let’s be clear the #AZBudget has been crafted to secure the minimum amount of votes needed to pass. The threat of shutdown lays at their feet for not engaging ALL legislators. AZ families have made it clear education is a top priority not shell-games!
Pass the #EducatorsBudget

Cronkite News reached out to the committee chair, Rep. Regina Cobb, R-Kingman, for comment, but a representative said she was unavailable and had no statement regarding the bill.

Educators also criticized a separate measure pending in the House that would allow all Arizona students to get taxpayer dollars to attend private school. Only certain students, including those with special needs, who are in foster care or living on Native American reservations, currently are eligible.

A separate proposal calls for $400 million in spending on public schools, but those dollars would be available only if the voucher measure becomes law.

Opponents questioned the use of taxpayer money to expand the program as well as making public school spending contingent on the voucher expansion. But the bill’s sponsor, Rep. Ben Toma, said the goal was merely to increase school choice.

“Ultimately this is about making sure that children and their families have choices to where they go,” said Toma, a Peoria Republican. “The question becomes: How should that system work? What’s the most equitable way for that to happen? I would contend that opening school choice is good for the state. … I think it’s good for families.”

Vouchers also figured in the U.S. Supreme Court’s ruling Tuesday in a Maine case. The court said states that use public funding to subsidize private schooling may not exclude religious institutions.

Randy Parraz, executive director of the Arizona Education Association, decried the ruling, which could further expand the spending of public funds on private schooling.

“Public education should be public education. People have the right to go and seek out what they want. They can do that,” he said. “Those dollars should not follow them.”

Parraz’s group has been campaigning for more money for public education for years. In 2018, an estimated 50,000 people rallied at the Capitol for more spending on public schools and higher teacher salaries as part of the Red for Ed movement.

A Census Bureau report in May found that Arizona again was among the worst states in the nation for per pupil spending on K-12 education in 2020. The state spent $8,785 per pupil that year, ahead of only Utah and Idaho. And it was dead last – 51st among states and the District of Columbia – when it came to the amount spent on actual instruction, at $4,801 per pupil.

Garcia said educators would keep the pressure on lawmakers until a final budget bill is passed. The new fiscal year begins July 1.

“This is not our first nor last time that we will be down here,” she said. 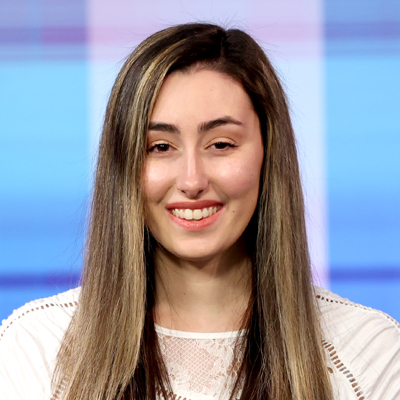 Rachel Fortunato expects to graduate in May 2023 with a bachelor’s degree in journalism.