The Red For Ed movement says Gov. Ducey’s wage increase proposal, which is supposed to increase teacher pay 20 percent by 2020, isn’t a permanent solution to years of underfunding. (Photo by Jesse Stawnyczy/Cronkite News) 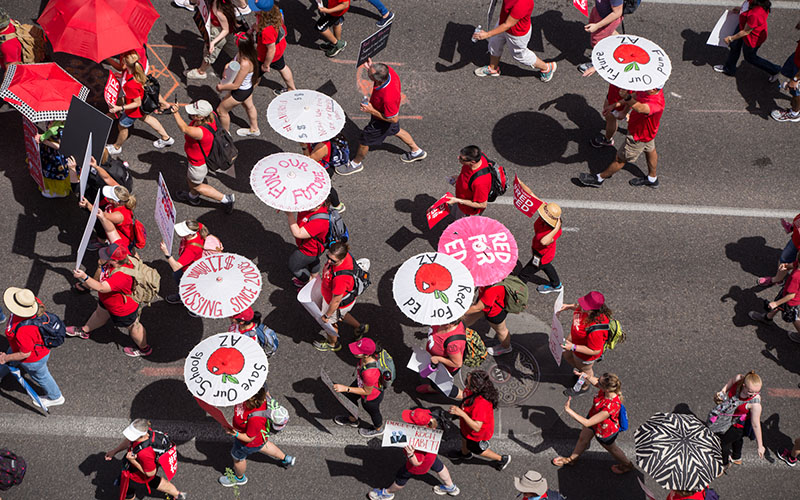 Some Red for Ed demonstrators carry parasols as they march down Washington Street in Phoenix toward the Arizona Capitol. (Photo by Miles Metke/Cronkite News) 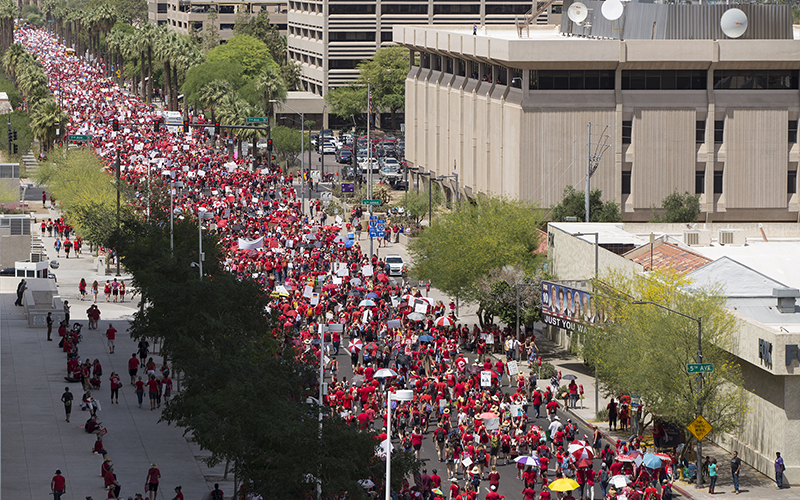 Thousands of Red For Ed protestors march down Washington Street on Thursday, the first day of a teacher walkout affecting nearly three-quarters of Arizona schoolkids. (Photo by Miles Metke/Cronkite News)

PHOENIX – Tens of thousands of Red for Ed protesters marched to the Arizona Capitol on Thursday in a historic demonstration against years of education budget cuts, with protesters demanding higher teacher pay and increased classroom funding.

“I’m here today because my classrooms need it,” said protester Lindsay Nash, a special education teacher in Surprise. “You can only tape textbooks together for so long before they literally don’t stay together anymore.”

The movement’s organizers put out specific demands ahead of the march, including a 20-percent salary increase, restoration of education funding to 2008 levels, extension of salary increases to support staff, development of a permanent structure for annual raises and a freeze on future tax cuts until per-pupil funding matches the national average.

More people arrived even as the march started, with protesters arriving from the light rail and driving cars with “Red for Ed” painted on the windows. The Arizona Department of Public Safety estimated that 40,000 people were at the Capitol. The Arizona Education Association said more than 70,000 people participated in Red for Ed events.

#RedForEd: What's about to happen when teachers walk out

Alicia Ehinger, who teaches first grade at Alta Loma Elementary School in Peoria, said she was both excited and nervous about Thursday’s march.

“It’s been an emotional roller coaster the last few days,” Ehinger said. “We’re doing this for our students. Arizona kids deserve so much more. … Every single child can be anything they want to be with the help of us.”

At least 75 percent of Arizona’s 1.1 million schoolchildren are in districts that have shut down during the walkout. As for teachers, organizers said 100,000 of them took part in “walk-in” demonstrations before classes over the past three weeks.

Ehinger switched school districts this year to be closer to her family, which includes five children. The move resulted in a large pay decrease, which is what spurred her to action Thursday.

“Just realizing my kids don’t have what they really need, I had to go out and buy a lot of stuff for the classroom that was not provided at our Title I school,” Ehinger said. “We’re going to do what’s right for our kids.”

She said one of her older children was babysitting while she protested.

Crowd size for the Red for Ed march was estimated at 40,000 to 50,000 people. (Photo by Jesse Stawnyczy/Cronkite News)

People distribute bottled water to Red for Ed demonstrators as they march down Washington Street in Phoenix toward the Capitol. (Photo by Miles Metke/Cronkite News)

Thousands of Red for Ed demonstrators march past the Comerica Theatre in Phoenix on their way to the Capitol. (Photo by Miles Metke/Cronkite News)

Red for Ed protesters shouted several lines directed at Gov. Doug Ducey, including "Shut it down!" if their demands are not met. (Photo by Jesse Stawnyczy/Cronkite News)

Thousands of Red for Ed protesters gather at Chase Field before their march on the Capitol. (Photo by Jesse Stawnyczy/Cronkite News)

Red for Ed protesters arrive by foot, car and light rail, with the majority dressed in red and carrying signs. (Photo by Jesse Stawnyczy/Cronkite News)

Alexa Horowitz, a 7-year-old second-grader, gets her face painted in support of her father, a teacher. (Photo by Jesse Stawnyczy/Cronkite News)

Protesters of all ages show up to march on the Capitol, including children. (Photo by Jesse Stawnyczy/Cronkite News)

Festivities slow as the protest reaches the Capitol, with many protesters seeking shade and taking a break before speeches started. (Photo by Jesse Stawnyczy/Cronkite News)

Ehinger is thankful her school district supports the Red for Ed movement, and she remains optimistic that the state government will ultimately work with teachers.

Many school districts encouraged their employees to use personal time or sick days when protesting, but legal experts said it’s unlikely for a school district to take disciplinary action over the walkout, especially when many school superintendents have voiced support for the movement.

More than 100 school districts and charter schools shut down for the walkout. But some school district officials said they hope to reopen classrooms by Monday. Chandler Unified School District told parents Thursday to plan for school to open next week. It’s not clear how many others plan to reopen.

Organizers said they do not have concrete plans for how or when to end the walkout, instead taking it “day by day.”

“Those sorts of decisions are going to be up to the educators,” said Littleton Elementary history teacher Noah Karvelis, one of the leaders of the Arizona Red for Ed movement. “It’s going to be as democratic as we can possibly make it.” 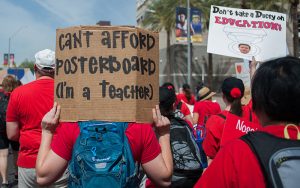 Police shut down streets temporarily, with Red For Ed marchers filling them sidewalk to sidewalk as they moved toward the capitol. (Photo by Jesse Stawnyczy/Cronkite News)

A show of good faith, he said, would be a meeting with the governor.

But Gov. Doug Ducey has declined to meet with Red for Ed leaders, instead pleading with parents Thursday to push their representatives to approve his proposed 20 percent teacher raise by 2020.

He also has refused to negotiate on educators’ four other demands, telling Capitol Media Services before the walkout that his plan was the best offer he would give educators.

The Senate adjourned in the early afternoon for the weekend, with lawmakers saying they would work on school funding legislation before Monday.

“It was disappointing, it was mostly the Democrats who were left trying to talk, to support teachers,” Engel said. “There were very few members of the majority party there on the floor.

“We’re ready to sit down at any point and look at permanent sources of funding. The only thing that’s making a difference right now is the Red for Ed movement.”

Justin McLellan is a history teacher from Ironwood High School in Glendale who attended the march. McLellan plans to stop teaching next year, but he’s concerned about Arizona’s education trends going forward.

Not everyone at the Capitol supported Red for Ed. Jennifer Harrison, a member of Patriot Movement AZ, was one of a handful of counterprotesters at Thursday’s march.

“Nobody’s against the teachers, obviously. Everyone likes the teachers and wants teachers to have their money,” she said. “But I think the money is being misappropriated.”

Harrison wants to eliminate the federal Department of Education, which she says loses tax money through “bureaucratic waste.” She is also skeptical of the per-pupil spending models many teachers have pointed to, as well as Karvelis’ motives in general.

“Is four weeks before graduation a time to demand more pay?” Harrison asked. “Kids are being affected by this. I think it’s selfish on behalf of the teachers to put their political demands on children and make children participate in a political message they clearly don’t understand.” 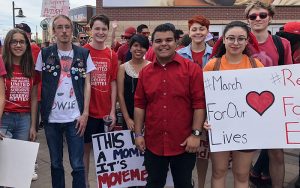 Student members of the March for Our Lives gun-safety movement showed up to support the Red for Ed marchers in downtown Phoenix. (Photo by Mikayla Morehead/Cronkite News)

“I don’t agree with using children, teachers and inconveniencing families and all of that,” she said.

Townsend on Wednesday had suggested that anyone wronged or impacted by the walkout should contact her office for potential legal action. On Thursday, she took a step back from those comments.

“I am not looking to sue teachers,” she said. “I have had at least 200 emails now of teachers saying ‘I’m not for this,’ ‘I’m supposed to start a new job the day after,’ ‘My kid is supposed to go on a mission,’ or a whole host of things of things that are going to interrupt and interfere and hurt people in our state.”

State Superintendent Dianne Douglas said if lawmakers had gone with a plan she proposed a year ago, which would have funded an 11 percent pay increase for teachers funded by an extension of the Prop 301 sales tax, then the Red for Ed situation would not have happened. But she said Ducey’s proposal is a good plan, and teachers should have voted on that rather than a walkout.

“The governor is negotiating on behalf of all the teachers in Arizona, and I think it’s sad that they chose to walk out,” she said. “It was premature.

The Arizona Department of Education has fielded multiple calls from concerned parents and teachers who did not want to walk out, she said. Those will be investigated, and any credible complaints will be forwarded for potential disciplinary action.

“If somebody files a complaint with the Department of Education, it doesn’t matter whether the behavior is about this strike … our duty is to investigate it,” Douglas said.

“It’s a little challenging,” Lemense said. “Trying to find alternate routes to the office and whatnot … but it’s nice to have (the camp still in the district).”

Rio Vista typically provides before- and after-school care, but has expanded its hours to accommodate the walkout. About 300 students were registered to attend Rio Vista and two other locations, reaching their max capacity, a Peoria city official said.

Lemense said she thinks most parents support the Red for Ed movement, but she hopes the walkout does not extend for a long period of time without some accommodations.

“I hope they extend the camps,” she said. “And I know they’ll have to extend it into the summer. … But sometimes it gets to a point where push comes to shove, you have to do what you have to do.”

Red for Ed is a grassroots movement led by Arizona Educators United, and is part of a national outcry from teachers and education advocates about low salaries. Protesters in West Virginia, Kentucky and Oklahoma have seen success after similar strikes by educators.