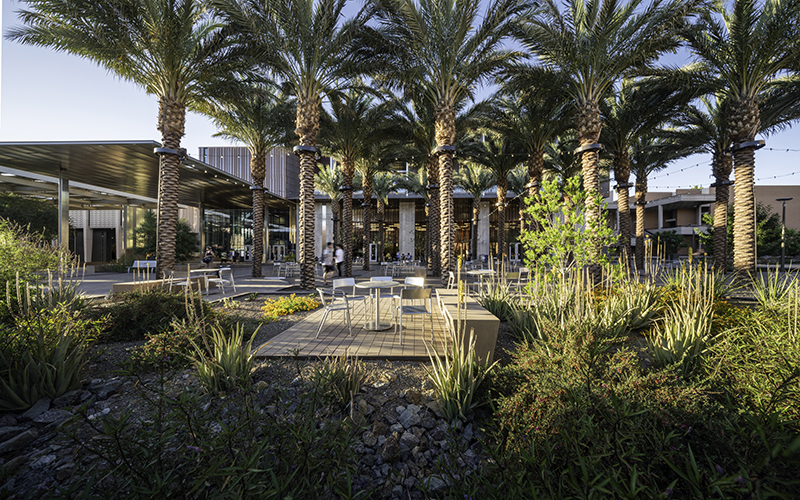 Additional shade from the palm trees along Orange Mall has reduced ambient heat by as much as 24 degrees, according to a 2020 study by the Landscape Architecture Foundation. (Photo courtesy of Matt Winquist) 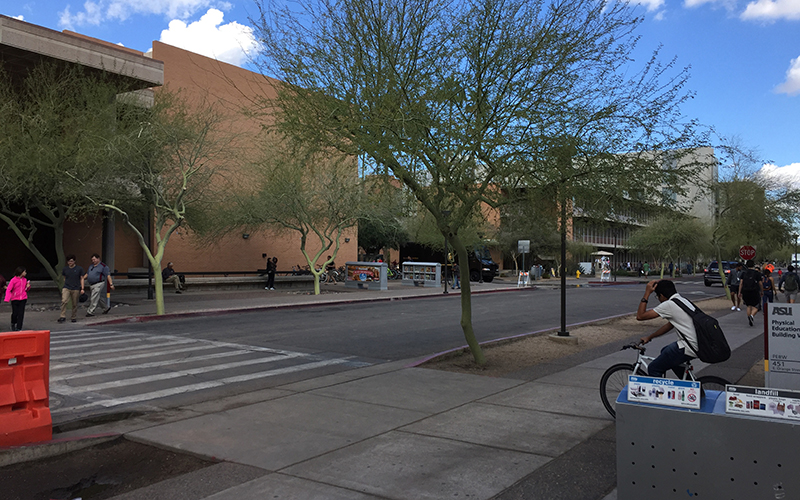 ASU’s Orange Mall, which skirts the north side of Memorial Union, used to be an asphalt road leading to parking garages. (Photo courtesy of Colwell Shelor)

TEMPE – Palm trees, bushes and succulents line Orange Mall in the heart of Arizona State University’s Tempe campus. Water trickles across rocks next to the walkways, which are studded with shaded spots for students to gather. Some noisy birds and a chorus of skateboards whizzing across the pavers break the silence.

But this mini oasis is more than just a campus space. It’s a sustainable landscape in the desert, one that conserves water, improves the soil and lowers ambient temperatures.

“You can create a very sustainable landscape without a lot of extra stuff,” said Norman Yatabe, the design manager for the Orange Mall Green Infrastructure Project. “It’s just making sure that you do it smartly and with a lot of thought.”

From solar panels to water fixtures, building plans have adapted over the decades to promote sustainable practices. But that certification process has expanded to include outdoor environments, such as ASU’s Orange Mall.

The mall – which skirts the north side of Memorial Union – used to be an asphalt road leading to parking garages. The only greenery were a few palo verde trees. But in 2018, they unpaved the parking lot road and put up a paradise.

Yatabe worked with ASU’s maintenance team to build this space to preserve more of the natural environment.

“The goal was to understand how they maintained the space and making sure that we were using materials and designs that were easily and readily maintained without a lot of effort in terms of manpower,” Yatabe said.

The project was part of the Sustainable SITES Initiative, a collaboration among the American Society of Landscape Architects, the Lady Bird Johnson Wildflower Center at the University of Texas and the United States Botanic Garden, according to the SITES website. Similar to LEED, the federal green building certification, SITES is like an outdoor report card that ranks how a space protects and restores the environment.

Two-hundred points are possible, and the outdoor spaces can move up in the ranks if additional steps are taken to improve the space. Eighteen categories are prerequisites, while 48 others are optional credits for certification. Orange Mall received Gold certification, which is 100 points.

What’s in a sustainable space?

For SITES projects, it is important not just to build a sustainable space, but to be sustainable in the process. That’s why 99.9% of all the material used for the Orange Mall project was recycled or composted.

Cindy Quinn, a sustainability consultant for Ecological Environments and the SITES project administrator for the Orange Mall project, said everything from sourcing products locally to restoring the soil is part of the sustainability transformation.

“It starts with not wanting to destroy any kind of protected land or protected waterways,” Quinn said.“They want your soils to be restored to the soil that it would have been before we had human impact on our land to prevent erosion, to restore the native plants and the native animals that lived in the area. You know, kind of as close as we can get to the landscape that this area would have been before we destroyed it.”

Consider the runnels carved into the ground on Orange Mall. The grooves are subtle, but they help collect storm runoff and channel it to foliage and plant beds, Yatabe said.

“The plant material actually cleans the quality of the water,” he said, “so it removes all the pollutants that are falling, you know, either on the ground or dirt or dust collected on the building rooftops.” 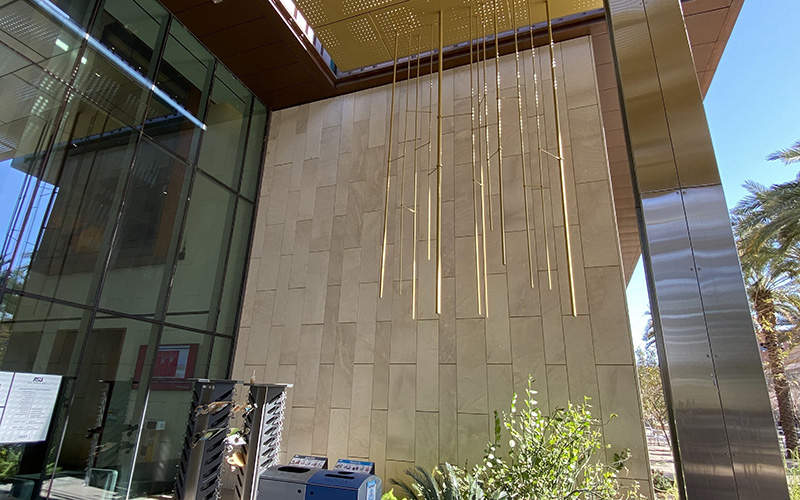 Another water-conserving system involves brass pipes connected to the Student Pavilion. Acting as a condensate water feature, the pipes direct air-conditioning condensation to foliage below, saving an estimated 1,000 gallons of water for irrigation.

Those aren’t the only sustainable aspects of the space. The additional shade from the palm trees along the mall has reduced ambient heat by as much as 24 degrees, according to a 2020 case study investigation by Hydro-GI Lab led by ASU professor Chingwen Cheng and funded by the Landscape Architecture Foundation. The pavers built around the palms are also made out of solar-reflecting material. That helps students walking to class, as the old paved road used to get up to 130 degrees.

ASU also is working to get SITES certification for the outdoor space at the Nelson Fine Arts Center. In addition to some shade structures that look like Pringles chips, the space has drainage systems that help the university conserve water.

“We collect water from the rooftops and from the surrounding areas, and it eventually all gets channeled into this space,” Yatabe said. “The water flows through a couple of bioswales to help clean the water up before it actually hits the underground chambers where it is stored and then released into the ground below as groundwater recharge.”

Above the underground bioswales sits an outdoor stage with lights that change color. Yatabe said the space is all about promoting sustainable practices while using the space for multiple purposes, encouraging the community to interact with it.

The SITES certification process has expanded worldwide since its creation in 2006, with some projects as far away as China and Chile. As of January, SITES had 250 registered and certified projects, representing about 1.18 billion gross square feet of outdoor space. In the Southwest, however, there aren’t many participants. The four corners states have just 10 registered projects, five of them in Arizona.

Organizations don’t have to get the SITES certification for their sustainability work. But Quinn said they are missing out. A certification approves the steps, she said, like seeing an organic label on your food.

“It really doesn’t hold any meaning, but actually having the certification where you have a third party going in and certified organic has meaning to it,” Quinn said. “It conveys a message to everyone who interacts with that project that it really has met those sustainability goals.”

SITES projects provide more than a gold star for an organization.

“SITES was developed as much as an educational tool to really show the connection between healthy landscapes and a healthy community,” said Danielle Pieranunzi, SITES national director. 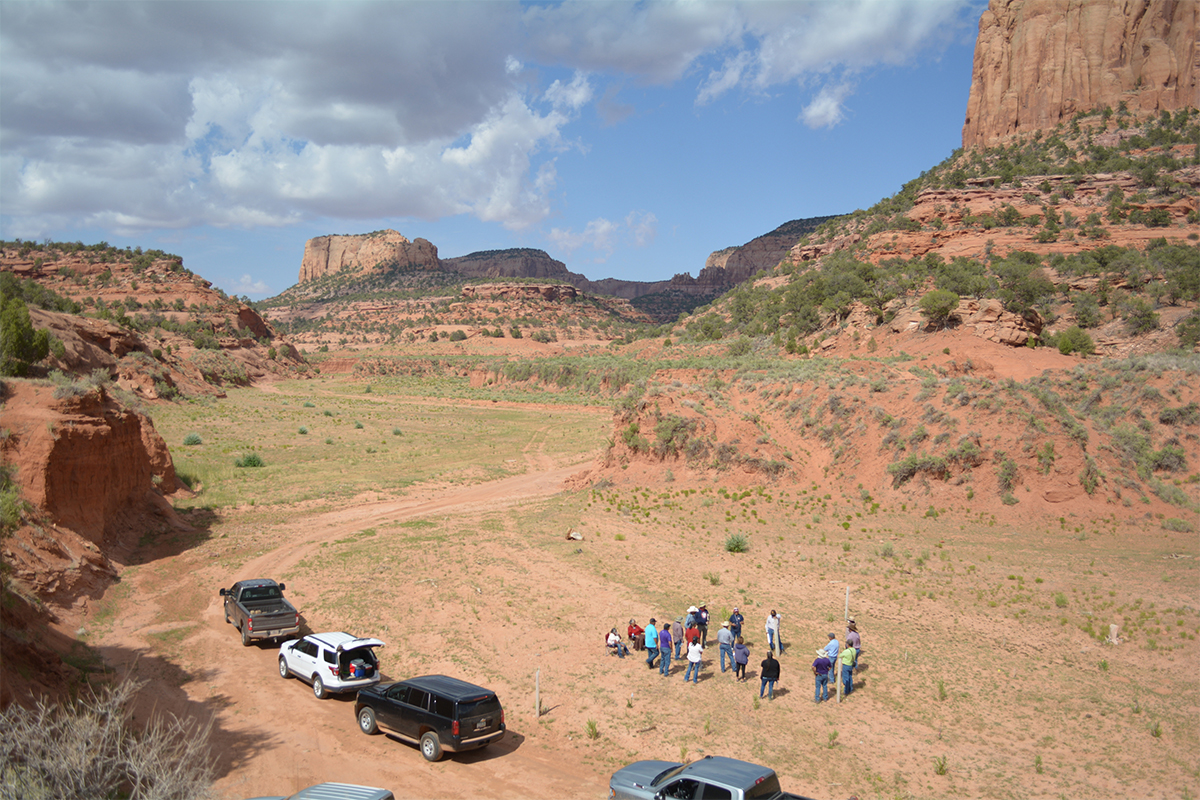 SITES projects can benefit the health of future generations, she said.

“Land is an important component of the built environment,” Pieranunzi said, “And it has so many things that it’s already doing that’s invisible to us, like cleaning our air, cleaning our water, controlling flooding, protecting us from so many hazards and and then just being beneficial to our health. … It’s urgent that we think about how we build our built environment because it has an effect on our health, on future generations.”

It is also being used as an educational tool. Cheng, who is the program head and associate professor of landscape architecture at ASU, uses Orange Mall as a model to teach her students sustainability and evidence-based design.

“So I think we’ve probably all heard about the sense about these benefits, but never really quantified or documented it,” Cheng said. “And so that’s the value of having this certification, the monitoring and research involved in this process, so we can have evidence based design. … As a designer, we do want to see whether our intention of design is actually being implemented as it was intended to be and whether that has impacts over time.”

Cheng said her students aren’t the only people who could learn from the SITES projects.

“We can use the Orange Mall as a good case, as a good example to learn from, especially in our harsh, hot-air-rich urban environment here,” Cheng said. “It’s something that everyone in the world can learn from how we do this.”

For now, ASU plans to incorporate these sustainability practices into other design projects. Everyone should do the same, Yatabe said.

“It’s really part of our DNA here at ASU,” he said. “Holistically, everyone should be concerned about climate change and, you know, trying to create more resilient landscapes and provide more sustainable spaces for people.”

Orange Mall is the only certified project at ASU. Meanwhile, the outdoor space of the Nelson Fine Arts Center still has a ways to go before it is certified, which could take months.