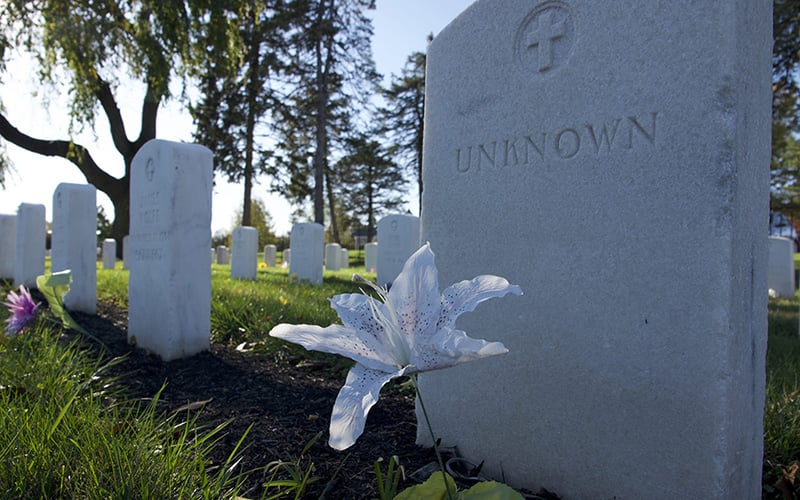 A tombstone of an unknown student that attended the Carlisle Indian Industrial School sits on the grounds of the present-day U.S. Army War College. The proposed Truth and Healing Commission would be charged with investigating unmarked grave sites and other abuses of the Indian boarding school system. (File photo by Addison Kliewer/Gaylord News)

The Truth and Healing Commission would investigate federal and mission boarding schools, which operated from the late 1800s into the 1900s. The schools were seen largely as an attempt to obliterate native society and culture from Indigenous children, who were often abused and sometimes killed.

“For generations, Indigenous children were removed from their families and traditional communities to boarding schools in an effort to force assimilation,” said Rep. Raul Grijalva, D-Tucson. “Unfortunately, many experienced physical, psychological, sexual abuse as a punishment for simply practicing their cultures or speaking their traditional language.”

He said the commission would begin the process of “healing the intergenerational trauma” from this “horrific history.”

The 10-member commission would be charged with uncovering historical records, documenting unmarked grave sites and investigating cases of abuse. It would then make recommendations on “actions that the federal government can take to adequately hold itself accountable for, and redress and heal, the historical and intergenerational trauma inflicted by the Indian Boarding School Policies.” What Grijalva called a “righteous reckoning of our history.”

But Republicans on the House Natural Resources Committee raised concerns over the fact that the commission will have subpoena power to force appearances by witnesses, what one GOP lawmaker called “unchecked power.” 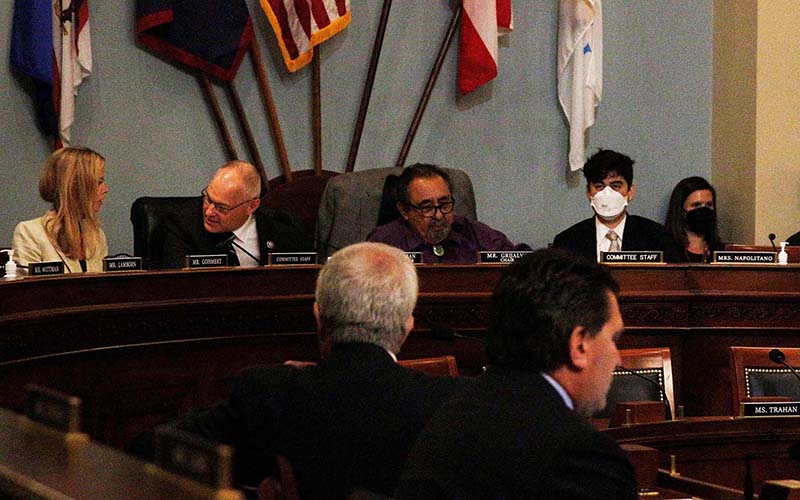 Democrats said the subpoena power is essential, with Grijalva saying that “without its subpoena power it (the commission) doesn’t have its authority.” Rep. Teresa Leger Fernandez, D-N.M., also noted that some organizations that operated boarding schools, such as churches, have been “unwilling to release those records,” which is why the subpoena is needed.

Republicans were also concerned about the amount of money that would be spent on the commission, through paying compensation to members and travel. Grijalva said the work of the commission members will be “a full time job.”

“We shouldn’t put limitations on those, there’s people here in Congress that probably work less than these commissioners are going to work,” he said.

The bill is sponsored by Rep. Sharice Davids, D-Kans., a member of the Ho-Chunk Nation and only the second Native American woman elected to Congress. There are 61 co-sponsors, six of whom are Republicans. All five Democrats in Arizona’s House delegation are co-sponsors.

“I support it because it’s the right thing to do,” Rep. Tom O’Halleran, D-Sedona, said in a recent interview. “We have to learn from our mistakes in the past.”

Advocates believe the commission can help Native communities heal from trauma experienced at federal Indian boarding schools by investigating what happened at those schools.

“We don’t just start with the reconciliation or the solution, we have to start with understanding the problem,” said David Simmons, director of government affairs and advocacy at the National Indian Child Welfare Association.

The bill comes as Interior Department has released the first volume of an investigation into tribal boarding schools. There were a total of 408 federal schools across 37 states, including 47 in Arizona, which trailed only Oklahoma and its 76 schools.

“You cannot just have a study with policy recommendations if you don’t have a process by which you reconcile the truth and begin the process of healing,” Grijalva said.

Stephen Curley, the director of digital archives at the National Native American Boarding School Healing Coalition, hopes that Native communities will be heavily involved in the commission’s work, to have voices heard that have “been suppressed through a variety of means,”

Simmons echoed Curley, saying people from Indian Country with firsthand experience of the schools “need to be front and center in helping the commission do its work and do it right.”

The Interior report identified marked or unmarked burial sites at approximately 53 schools across the system, a number that is expected to increase. Both Grijalva and O’Halleran said that one of the commission’s first actions should be the identification of these graves.

“People need to know where their family is at,” O’Halleran said. “We need to identify each and every one of these so it never happens again.”

Grijalva said after Wednesday’s committee vote that he expect the bill to come before the full House sometime in July. He thinks it will pass the House and then “it’s going to be very difficult for the Senate to ignore.” The Senate has its own version of the bill, sponsored by Sen. Elizabeth Warren, D-Mass.

Advocates also want to see this legislation pass quickly, so the commission’s work can begin.