Family members of the Arizona Wildcats softball team followed the team during regular season and when it advanced to the Women’s College World Series. (Photo by Ian Sacks/Cronkite News)

OKLAHOMA CITY – As Arizona sophomore Allie Skaggs stepped on second base for the final out of the NCAA Super Regionals in late May, pandemonium ensued among the Wildcats.

In Vista, California, the family of Arizona freshman outfielder Paige Dimler also was elated by the win, but they were looking ahead as well.

“We were sitting on the edge of our seats during Super Regionals, like, ‘Oh, my God, if they win, then we got to scramble to find a way to get out (to the Women’s College World Series),’” said Rich Dimler, Paige’s father. “Literally, when the last pitch was in the glove, I’m like OK, I’m on the computer trying to find a flight, trying to get a hotel, trying to get a rental car. … We finally made it here, and it was absolutely all worth it.”

The Dimlers are no strangers to roadtrips to watch their daughter and the Wildcats play. They frequently make the roughly six-hour drive from Vista to Tucson for weekend series. They typically leave at 5:30 a.m. Friday morning to arrive in time to have lunch with Paige before her games that night and over the weekend.

With a passionate cheering section behind the Arizona dugout at all three World Series games this month, Dimler saw similarities between USA Softball Hall of Fame Stadium in Oklahoma City and Arizona’s ballpark, Hillenbrand Memorial Stadium. 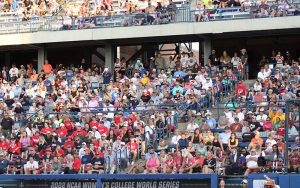 “It honestly doesn’t feel any different than games at Arizona because we have the most amazing fans,” Dimler said. “Wildcat fans are just the best.”

Because Skaggs’ family lives in Tucson, home games are right in their backyard, but they, too, traveled around the country with the team this postseason – going to Columbia, Missouri, for the regionals; Starkville, Mississippi for the super regionals; and then to Oklahoma City.

“It was one hell of a run and a great, special group of ladies,” said Jim Skaggs, Allie’s father. “Being an alum – my wife and I are both alums – it’s even extra special. … They’re a young team, and hopefully they go back to work and get a chance to come back again.

“I guarantee you, even though (the 5-2 loss to Texas on Sunday, which ended Arizona’s season) was tough, they will remember this week for the rest of their lives.”

Amid tears for the end of their season, several Wildcats went into the stands to greet their families and friends on Sunday. But they also took time to greet young fans, sign autographs and take pictures with them.

“It wasn’t long ago when they were 8-, 9-year-old girls looking up to the girls in the uniforms on a stage like this,” Jim Skaggs said. “When they get a chance to give back, they all want to do it. They look (the girls) in the eye. They’ll give them autographs. They’ll talk to them and make them feel special for that just little minute because ultimately that’s what it’s all about.”

Allie Skaggs seeks to inspire the next generation by being kind, accepting, humble and confident. Those four words were on the custom shirts her family wore in the stands.

Allie Skaggs said she chose these characteristics about a year ago, after her father asked her what she wanted to stand for.

The Wildcats certainly demonstrated confidence during their run to a third consecutive Women’s College World Series. After struggling early in the season and beginning Pac-12 play 0-8, the Wildcats claimed one of the final berths to the NCAA Tournament. At that point, the season flipped, and they won five straight games to punch their ticket to OKC.

Lowe – who succeeded Mike Candrea, the NCAA’s all-time winningest softball coach – and the Wildcats hit their stride toward the end of her first year.

“We went in three weeks from a team that was excited to have the opportunity to play more games to a team that knew we were going to win the regional and win a super regional,” Lowe said. “Then when we got (to Oklahoma City), we weren’t satisfied with being here. That’s important, and I think we grew up tremendously.”

The roster this year was mostly underclassmen and featured just a pair of redshirt seniors and one graduate student. So, just about everyone can return to the Wildcats next season.

“The future’s really bright for the Arizona Wildcats softball team,” Rich Dimler said. “I think they needed to prove it to themselves that they could get this far. I think throughout the whole season, they were just trying to figure out who they were, and then all of a sudden at the very end of the season, the whole thing just came together and jelled. It was just so incredible to watch that happen. …. There’s just so much to build on for next year.”