OKLAHOMA CITY – Seated just a few rows up in the University of Arizona cheering section, legendary Wildcats coach Mike Candrea beamed with pride as he looked on at the program he led for 34 years.

Not solely because the Wildcats were participating in a third straight Women’s College World Series. But because of the coach who took over as the leader of the program: Caitlin Lowe.

“Caitlin was a superstar at every level,” Candrea said. “She was a quiet leader as a player, and so the question was going to be how vocal can she be when she needs to. She’s a tremendous leader. I mean a very good communicator, very inspirational. (Her) knowledge of the game is off the charts. So, she checks every box. I was very, very happy that she got the opportunity to take over the program. And this program will get better, and better, and better with her.”

Lowe’s first season came to a close with a 5-2 loss to Texas Sunday evening. The Wildcats finished with a 39-22 record.

Candrea and Lowe have a long and storied history together. Lowe played for Candrea with the Wildcats from 2004-07 and won a pair of national championships as a player. Widely considered one of the best center fielders of all-time in the sport, Lowe ranks second in program history in batting average (.446). 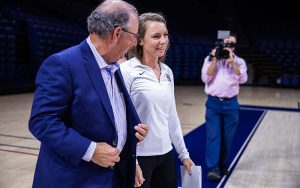 Shortly after Mike Candrea, left, announced his retirement as coach of the Arizona Wildcats in June, the school named Caitlin Lowe as its new leader of the softball program. (Photo courtesy of Mike Christy/Arizona Athletics)

She came back to her alma mater as an assistant coach in 2012 and remained on Candrea’s staff through the end of his career. When he retired as the all-time winningest coach with 1,674 victories last year, Lowe stepped right into the position.

“When it was (Lowe as Candrea’s replacement), we acted so relieved and so overjoyed that we were going to be able to continue the traditions that coach had brought to Arizona,” said Rich Dimler, the father of Arizona freshman outfielder Paige. “It’s just been an amazing experience.”

Dimler described that he first met Lowe when his daughter was in eighth grade. Throughout the recruiting process, the class and respect Lowe displayed sold the Dimlers on the Wildcats program. These traits Lowe picked up from her predecessor.

“Coach Candrea always talked about this being about people,” Lowe said. “I think it’s so important. The relationships are what matters. The X’s and O’s are great, but pouring into people, and I don’t mean 18 people on the team, I mean support staff and everyone that goes into making this program tick. Those are the things that make it rewarding. It’s not always just helping someone be better at the plate. It’s about helping them be better people.”

Meanwhile, on the field, as Lowe’s rookie season progressed, the Wildcats melded into one. After starting Pac-12 play 0-8, Arizona went .500 down the stretch in conference play and was one of the last teams to get into the NCAA Tournament field. At that point, the team flipped the script and won five straight games in the NCAA regionals and super regionals to reach the Women’s College World Series.

“It’s been fun following this team,” Candrea said. “I’m just really proud of Caitlin and the job (she and her staff have) done. This team really became fighters. They got better as the season went on. … (I’m) just really proud of the leadership Caitlin has given this program and will take them into the next generation.”

With a team that was a majority of underclassmen, Lowe’s leadership was on full display. After seeing six players graduate from the 2021 team that also reached the Women’s College World Series, this year’s team searched for its identity early in the season.

“This team and my journey, I think, were very similar,” Lowe said. “They felt they were replacing a really big senior class, and obviously when the GOAT leaves, it’s a whole different kind of vibe, but I thought we were kind of find our way together. That’s what was so special about it. I thank them for putting their faith in me to lead them to here. It doesn’t go unnoticed that that was a big step for a lot of people.”

Lowe’s first season came to a close with a 5-2 loss to Texas Sunday evening. The Wildcats completed the season with a 39-22 record. 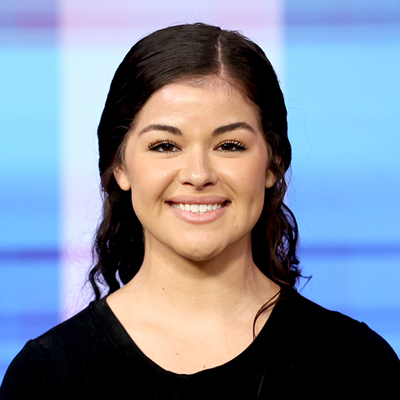 Ashley Stevens expects to graduate in August 2022 with a master’s degree in sports journalism.