A passenger checks out information about monkeypox at the Soekarno-Hatta International Airport in Indonesia in 2019. Arizona may have its first monkeypox case. (File photo by Aditya Irawan/NurPhoto via Getty Images) 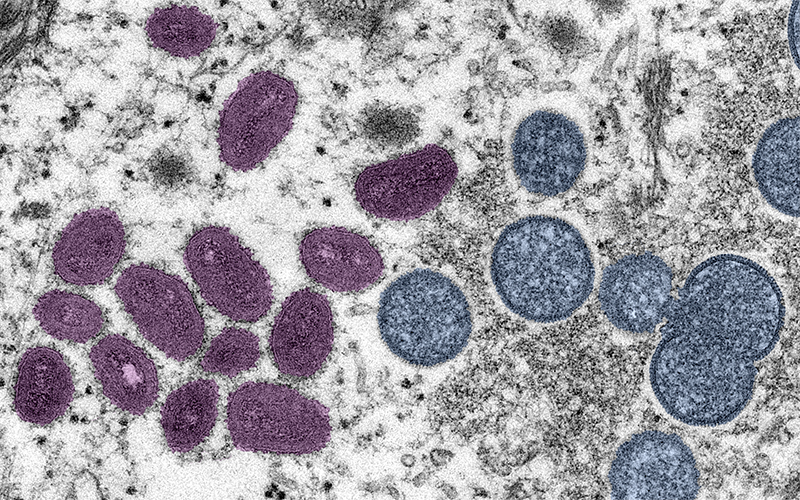 This digitally colorized electron microscopic image depicts a monkeypox virion. On the left are mature, oval-shaped virus particles, and on the right are the crescents and spherical particles of immature virions. (Image courtesy of the Centers for Disease Control and Prevention/Cynthia S. Goldsmith, Russell Regnery, Hannah Bullock)

PHOENIX – Arizona may have its first case of monkeypox, and health officials are working to confirm the presumptive positive, the Maricopa County Department of Public Health and Arizona Department of Health Services announced Tuesday.

Health officials urged Arizonans not to panic about the rare disease, which is rarely fatal.

According to a news release from the county department, the positive result discovered by the Arizona State Public Health Laboratory is being retested by the Centers for Disease Control and Prevention. The man who tested positive is in his late 30s and is isolated and recovering.

“It is important to remember that monkeypox remains a rare disease here in the United States and in Maricopa County,” Dr. Rebecca Sunenshine, medical director for disease control at MCDPH, said in a statement.

According to the CDC, there have been 35 cases of monkeypox in the United States this year, with a dozen among California, Colorado and Utah. As of Monday, the CDC reported 1,019 cases of monkeypox and orthopoxvirus – the broader genus – worldwide.

The virus that causes monkeypox is related to smallpox but is far less fatal, according to Grant McFadden, a professor at Arizona State University and the director of the Biodesign Center for Immunotherapy, Vaccines and Virotherapy. He expects U.S. cases to grow until health care infrastructure catches up with the spread, but that the mortality rate will remain less than 1%. There are also several treatments and vaccines for monkeypox. McFadden’s primary message for Arizonans: “Don’t lose sleep” over the virus.

The monkeypox virus primarily is spread through direct contact with monkeypox lesions and rashes, but it also can be spread by sexual contact, respiratory droplets and animals, according to the CDC.

Dr. Nick Staab, a medical epidemiologist with the county, said health officials are working with health care providers across the state through a health alert network to look out for symptoms of monkeypox. The provider who identified the potentially infected individual was a part of this network.

The county hopes infections will remain low through Arizonans watching for symptoms and taking health precautions.

Health officials recommend precautions similar to those used to stem the spread of COVID-19: washing hands, wearing a mask and staying home if experiencing respiratory symptoms or a fever.

Early symptoms include fever, headache, muscle aches and backaches, swollen lymph nodes, chills and exhaustion. The most recognizable symptoms are the sores, or pox, that develop all over the body. They can exist before or after symptoms appear, and sometimes are the only symptom.

Monkeypox, which is not endemic, is rarely found in most Western countries, but more than a thousand cases have been reported in several countries in Europe, with the most found in the United Kingdom and a few in South America, the Middle East and Australia.