PHOENIX – School districts across the city are working to change their bus fleets to electric, and parents are on board.

“My eighth-grader has asthma, and she has benefited more from the electric bus,” said Elba Sánchez, a parent volunteer at Justine Spitalny Elementary School in Maryvale. “She had very constant asthma attacks, and now she even forgets to use the inhaler.”

Spitalny is in the Cartwright Elementary School District, which, along with Phoenix Union High School District, is leading the charge to electrify bus fleets. Both districts serve Latino communities in south and west Phoenix.

According to the U.S. Department of Health and Human Services, Hispanic children are 40% more likely to die from asthma compared with non-Hispanic whites. And the most recent State of the Air report by the American Lung Association gave Maricopa County a failing grade based on high ozone days and high particle pollution days

Chispa sponsored two visits to the Twin Rivers School District in Sacramento, California, which has the largest fleet of electric buses in the country. Both visits were inspiration for Cartwright and Phoenix Union.

“I believe that right now they have over 40 (electric buses), and they are putting in infrastructure for another 80,” Medrano said. “We got to see firsthand what it takes to prepare ourselves to do that successfully.”

The visits, which took place in December 2020 and 2021, helped district officials learn how to work with their partners to create infrastructure for the changeover in their bus yards, Medrano said.

Cartwright also is looking for state and national grants to fund part of the cost of electric buses.

“We have one right now, and in the near future, we would like to build an infrastructure to be able to have up to 10 or more buses,” Medrano said.

One grant is from the state’s Clean Diesel Grant Program, created under the Energy Policy Act of 2005 to reduce diesel emissions. States receive funds so local fleets can retrofit diesel engines or replace them with vehicles that use alternative fuels.

“We are gathering all the information on this grant program to apply on time, hoping to get another bus next year,” Medrano said.

She also said the bus is fully charged in about six hours.

“It’s a good start to take care of our planet,” Alaniz said.

Medrano said the cost of financing an 84-passenger e-bus like the one Cartwright has would be about $450,000. Together with their partners, district officials are constantly working to find funding, with the goal of expanding the electric fleet to 10 buses in the next five years.

“Our main motivation is to contribute to improving air quality so that our students are in the healthiest environments at all times,” he said. “From the time they board our buses, through their entire school day, until they get home.”

Sánchez, the parent volunteer at Spitalny, said she’s excited about the initiative, which will improve the well-being of future generations. She’s gotten to ride the e-bus and experience its benefits, including spacious, clean seats with seat belts.

“It would be great if all the other schools had that type of bus,” she said. “I would tell all parents to fight and not lose hope.”

Phoenix Union High School District owns four electric buses and plans to have 10 by 2024. From there, the district will examine the effectiveness for more expansion. 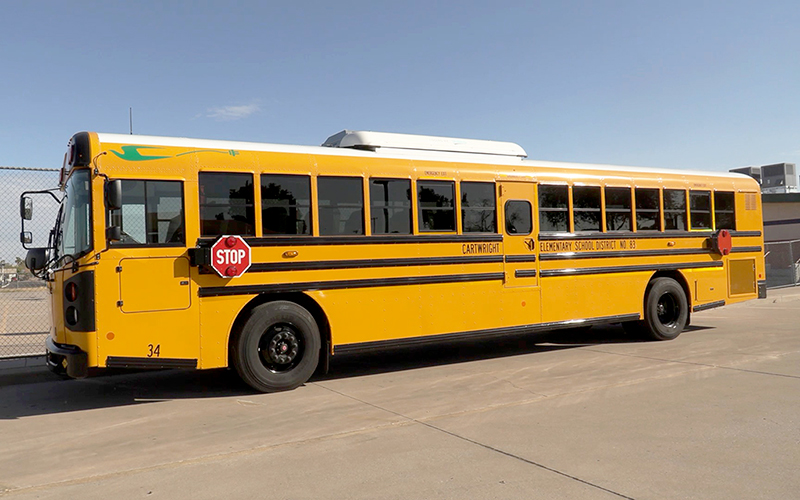 Cartwright Elementary School District’s first 84-passenger electric bus was purchased in June 2021. The district is working to acquire 10 more in the next five years. (Photo by Jimena Vera/Special for Cronkite News)

Bryan Henderson, director of transportation for Phoenix Union, said the district has the same style for its four electric buses: a larger, smoother-running model similar to a city bus to serve general routes.

“The next couple that we purchase will be that type of bus for transportation in the south Valley,” he said.

Financing the first e-bus took 12 to 18 months, Henderson said, and was acquired with the help of grants from the so-called Volkswagen agreement. Under a settlement with the Department of Justice in 2017, Volkswagen agreed to pay a $2.8 billion criminal fine and a $1.5 billion civil settlement for installing illegal software in millions of its diesel vehicles to make them comply with federal emissions tests.

The Environmental Protection Agency found that Volkswagen vehicles were emitting up to 40 times more pollution than allowed under the Clean Air Act.

Arizona is expected to receive nearly $57 million from the settlement over 10 years to fund projects that help reduce nitrogen oxide emissions. According to the VW agreement, the most recent installment of the money to Arizona was in 2019.

“There were funds … that we were able to apply for and apply towards the purchase of a bus,” Henderson said. “So we were able to use that to make things a little quicker as far as acquisition is concerned.”

As in the Cartwright district, Phoenix Union has community support and partners in the bus industry, including Blue Bird, the school bus manufacturer, and RWC Group, the commercial truck and bus dealership.

Henderson said students and parents have reacted positively to the district’s significant progress.

“Students are excited to have something new and cutting edge that maybe a lot of other people don’t have, especially a lot of people in the rest of the country, not just here in Arizona,” he said.

Betty Beltran’s daughter, Angelica, who attended Metro Tech in the Phoenix Union district, developed respiratory problems as soon as she started school. The school nurse told Beltran that Angelica, who rode the bus each school day, might be developing asthma.

“At least once a week, they called me from school to tell me that my daughter was sick,” Beltran said.

In the spring of 2012, she and Angelica moved to a neighborhood near the school, a place with more vegetation, which made her concerned about her daughter’s allergies. But because their new home was close to the school, Beltran walked Angelica to school every day.

“As soon as she stopped riding the school bus, my daughter didn’t get sick anymore,” she said.

Beltran is part of the group of mothers who participate in Chispa Arizona’s Healthy Buses for Healthy Children program, which works with school districts to acquire more electric school buses.

​​”No one believed in us,” Beltran said. “There were very few of us, the mothers of the family, the community’s people who fought, and we achieved a lot.”