Many housing authorities in Arizona refer Section 8 voucher holders to such third-party websites as Socialserve to find available rental units. However, the authorities provide no oversight regarding scams on these websites. In MiAsia Pasha’s case, the scammer gained access to the home through the “Show Yourself In” tool on the Progress Residential website and provided the unique entry code to Pasha, who lost more than $1,000. (Photo by Tirzah Christopher/Howard Center for Investigative Journalism) 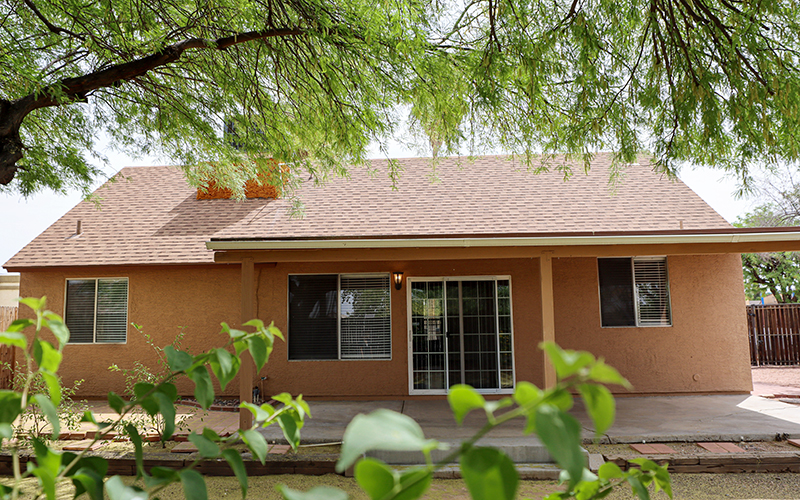 The north Phoenix house that scammers used to rip off MiAsia Pasha was listed on Socialserve again a few days later, but with different contact information. (Photo by Tirzah Christopher/Howard Center for Investigative Journalism)

PHOENIX – Dozens of private landlords walked through the arched doorways of the colonial revival red brick building on a bright spring day to hear the government’s pitch for its Housing Choice Voucher program.

City leaders had recently quadrupled the financial incentive for private landlords to participate in the Housing Choice Voucher program, commonly known as Section 8, which is one of the most prevalent ways to secure affordable housing. To help spread the word, the Phoenix Housing Department offered an open house at Memorial Hall at Steele Indian School Park on March 29.

Private landlords serve as gatekeepers for tenants who’ve received vouchers, providing the final step in the process. The U.S. Department of Housing and Urban Development, which funds Arizona’s more than $200 million program, suspends any entity, including private landlords, found to be engaged in corrupt or criminal activity in the program.

But the majority of Arizona’s roughly two dozen public housing authorities, which manage the program for HUD, lack a formal process for approving private landlords, according to a Howard Center for Investigative Journalism review of their policies. And Arizona’s competitive housing market only complicates matters for voucher holders.

MiAsia Pasha, 69, knows well the hurdles some voucher-holders are facing. She lived in the same HUD-subsidized rental home for about a decade before the landlord asked her to move out in January.

Months of rejections and couch surfing followed, so Pasha asked to attend the Memorial Hall gathering in hopes of finding a landlord who would accept her voucher.

“It’s like I’ve got a stigma on my name, or on my voucher, that says I’m not worthy to have my place,” said Pasha, a lone tenant among the sea of landlords. “I had no idea that I was going to have so many doors slammed in my face, I was not prepared for that at all. And I’m in shock.”

The voucher program subsidizes private rent for low-income families. It usually requires tenants to contribute 30% of their income toward rent and utilities.

However, long waitlists in Arizona mean it can take applicants years to receive their voucher, even before they begin the long process of finding a landlord who will accept it.

According to the federal Fair Housing Act, housing providers may not discriminate against anyone on the basis of race, color, religion, sex, national origin, familial status or disability. In 2016, HUD released guidance to apply the Fair Housing Act to people with criminal backgrounds, making it illegal for landlords to deny applicants solely based on their criminal history. Even so, housing experts in Arizona say, criminal backgrounds can cause landlords to deny applicants.

Maxine Becker, an attorney at Wildfire Community Action Agency in Phoenix, says the housing market is too tight for landlords to consider applicants with criminal backgrounds.

“If you’ve got an eviction, if you have a criminal history, I think most of them are just going to move right on and find someone who doesn’t carry that risk,” Becker said.

Most Arizona public housing authorities make landlords responsible for screening prospective tenants, including criminal background checks. And landlords can turn down tenants on just the basis of an arrest or being named in a warrant.

Landlords often use private companies to run background checks, Becker said, and those companies don’t have to comply with the same standards used by housing authorities during the voucher approval process. For example, the Arizona Department of Public Safety, which oversees and distributes criminal background records, is legally required to maintain accurate and complete information. Private companies are not.

“They just buy the data in bulk and then they sell it to landlords who can go through it,” Becker said. 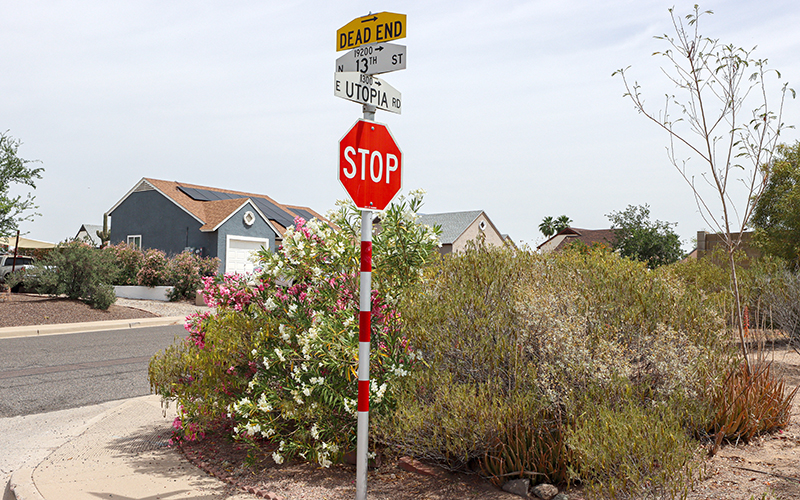 The house that was involved in the scam – still being toured by prospective tenants – is on East Utopia Road in north Phoenix. MiAsia Pasha said that her desperation for an affordable place to live caused her to fall for the scam. (Photo by Tirzah Christopher/Howard Center for Investigative Journalism)

“There’s not enough supply and there’s more than enough demand for them to be fairly picky,” Matossian said.

Recent HUD data showed a 13% decline nationally in landlord participation in the voucher program from 2010 to 2018, and a 1.3% drop in Arizona units leased to voucher holders since December 2019.

To encourage owners to participate in the voucher program, a few cities offer financial incentives. Mesa and Chandler give a one-time payment of $1,000 to new landlords. Chandler also provides a $400 lease renewal bonus for landlords who already are participating.

The Phoenix Housing Department, the largest in the state, oversees more than 6,000 units, almost 30% of all units in Arizona. The Phoenix City Council voted unanimously in February to quadruple landlord incentives from $500 to $2,000, which the housing authority estimates will help secure an additional 425 rental units by August.

“Really, anyone who has a property, whether it’s a home, an apartment complex, a duplex, and who is interested in accepting vouchers as a form of payment, can participate in our voucher program,” said Elenia Sotelo, a housing manager for Phoenix who organized the landlord open house in March.

But the voucher program structure drives participants toward an unregulated system rife with opportunities for exploitation. Without a formal approval process for landlords, housing authorities have little control over who participates in the program. And an already vulnerable population of tenants is forced to trade one set of risks for another. 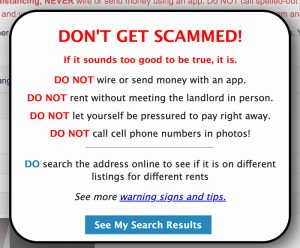 The Socialserve website has scam warnings on every page: Two specific instructions are that payments must not be done through an app, and to check whether the listing is available on other websites. (Screenshot via Howard Center for Investigative Journalism)

Just three days after the landlord open house, Pasha stood outside a home on the corner of Utopia Road, awaiting the keys to her new residence, relieved to have finally found a landlord who would accept her voucher.

She found the home on Socialserve, a nationwide nonprofit that helps people with vouchers find willing landlords. HUD requires all housing authorities to maintain a list of places – either a physical list or on a website – that accept vouchers. To meet this requirement, the Phoenix Housing Department lists Socialserve on its website.

At 10:30 a.m. on April 1, the day Pasha was to take possession of the home, she sent the landlord a rental deposit, totaling more than $1,000, and waited for him to meet her at the house on Utopia. Fifteen minutes later, she gave him a call.

“He never answered his phone,” Pasha said. “It was off. And I was devastated, literally devastated.”

Although Pasha has worked with an emergency shelter provider since 1991 and sits on the board of CASS (Central Arizona Shelter Services), she had fallen victim to a rental scam. The Howard Center found that images of the rental home – which actually is owned by Progress Residential, a rental home provider – were used to create a fake listing on Socialserve.

This scam works when the scammer gains access to the rental unit and shares it with a potential tenant – a ruse that has become even more popular as contactless home tours have grown in popularity. In Pasha’s case, the scammer asked for photos of her ID and used those to obtain a PIN to access the door’s digital combination lock, giving her access to the home during her search.

“I made a mistake,” Pasha said. “I got caught up in desperation.”

She alerted Socialserve and Progress Residential and filed a report with the Phoenix Police Department.

“One of Progress Residential’s top priorities is the safety and security of its residents and potential residents,” the company said in a statement to the Howard Center. “We have a dedicated team focused on researching and investigating any reports of fraudulent activity or potential scams.”

A supervisor at Socialserve’s call center said that, in addition to the warnings on its site, the company removes scams when made aware of them, but otherwise it can’t prevent them.

Two weeks later, the Howard Center spotted the same property back up on Socialserve. But the rental listing had a new landlord’s name, phone number and email. 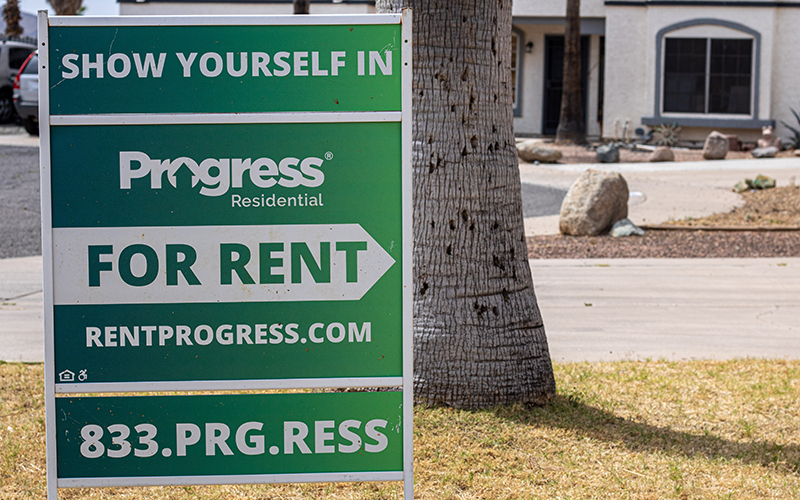 MiAsia Pasha lost more than $1,000 in a scam involving a home in north Phoenix owned by Progress Residential. Pasha alerted Socialserve and Progress Residential and filed a report with the Phoenix Police Department. (Photo by Tirzah Christopher/Howard Center for Investigative Journalism)

The agreement between landlords and housing authorities is known as the Housing Assistance Payments contract, or HAP. It gives both parties a great deal of autonomy, shields public housing authorities from any liability for renters’ behavior and gives private landlords significant freedom in choosing tenants.

Landlords are accountable for the actions of their tenants. If they accommodate disruptive behavior, they can be banned from participating in the program.

Evictions, which can be as serious a hurdle to affordable housing as a criminal record, also are left to the landlord’s discretion. Unlike some criminal offenses that can be expunged, set aside or sealed, removing an eviction from a tenant’s record can be a lengthy and expensive process.

“I’m not even sure that it matters, because your voucher doesn’t cover the actual cost of housing, because rent has exploded,” she said. “I just really don’t see the options. And it looks so hopeless.”

Pasha said her experience with Socialserve triggered the same sense of helplessness she felt in 1991 when she said she was diagnosed with HIV and later formed a drug habit as a way of coping.

“I am living sofa-to-sofa right now, and after 10 years of having your own place, it’s a little different,” she said. “It makes me want to go out and do drugs, but that’s not who I am now.”

Research has shown that unstable housing can trigger a new substance abuse problem or worsen an existing one. Although Pasha was not driven to relapse, she sees the impacts of desperation and scarcity every day.

She continues calling landlords every week, hoping the voucher is her key to affordable housing. The gatekeepers don’t seem to think so; she says they hang up on her as soon as she reveals her voucher status.

“We’re not stupid people,” Pasha said. “We just need a place to stay. Why can’t we have a chance?”

If you or someone you know is facing housing discrimination or believe your rights have been violated, you can file a complaint by calling HUD at 1-800-669-977 or visiting the How to File a Complaint page on HUD’s website. You can also contact a fair housing organization in your area.