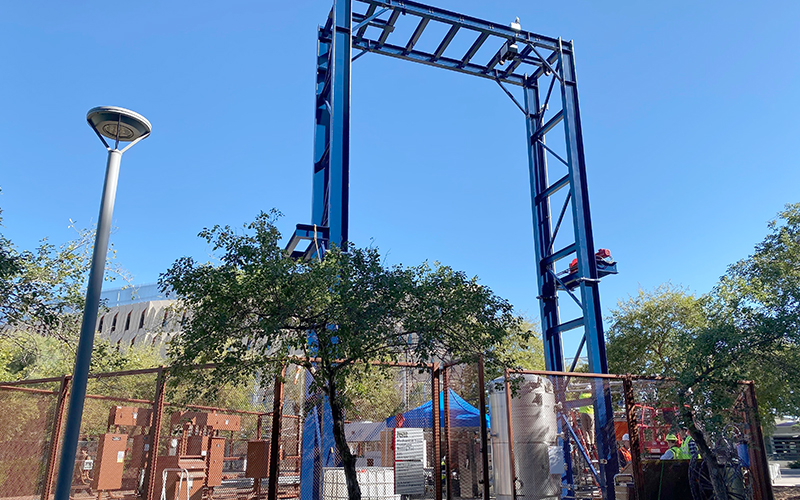 A stainless steel drum sits below a blue gantry at Arizona State University in Tempe on March 15, 2022. The drum is filled with 150 sorbent-filled discs, which are pulled apart like an accordion to expose them to more air, says Travis Johnson, associate director of ASU’s Center for Negative Carbon Emissions. (Photo by Emma VandenEinde/Cronkite News)

TEMPE – With carbon emissions steadily rising, treelike metal structures that attract carbon dioxide like a magnet and hold it like a sponge could help.

Carbon Collect Limited, a renewable energy manufacturer in Dublin, has worked with Arizona State University to create what’s trademarked as the MechanicalTree. It’s based on research done by Klaus Lackner, who directs ASU’s Center for Negative Carbon Emissions.

Earlier this year the company installed a prototype in a small lot next to ASU’s Biodesign Institute. A dark blue arch – known as a gantry – looms over what appears to be a 10-foot-tall beer keg. But you won’t find suds inside.

“Inside of that drum right now is 150 discs,” said Travis Johnson, associate director of ASU’s Center for Negative Carbon Emissions. “On those discs is the sorbent that captures the CO2. So that’s where the magic happens.”

The magic Johnson refers to comes from removing carbon dioxide from the atmosphere without requiring expensive materials or the assistance of energy-intensive machines to blow wind through it.

CORRECTION: An earlier version of this story may have inadvertently included proprietary information and incorrectly stated the relationship between Arizona State University and the Dublin-based company Carbon Collect Limited. Carbon Collect created the MechanicalTree using research and support done at ASU. The story has been corrected, but clients who used earlier versions are asked to post the correction found here.

The MechanicalTree was one of six projects funded by the U.S. Department of Energy to slow the effects of carbon dioxide in the environment. The Dublin company and ASU’s team received $2.5 million to build the device. The goal is to build three “tree farms” in the coming years to capture 1,000 tons of CO2 a day.

Carbon emissions, which are a major contributor to climate change, are rising. The U.S. Energy Information Administration found that petroleum-related carbon emissions rose 8% in 2021, and they’re expected to rise 5% this year. That increase in carbon dioxide accounts for two-thirds of the temperature increase in our climate, according to the National Oceanic and Atmospheric Administration.

This has scientists worried that the world isn’t adapting fast enough to meet this change. That point comes through in the latest report from the U.N. Intergovernmental Panel on Climate Change, which also states that the heat caused by carbon emissions is killing crops, trees and fish – all of which help sustain the planet.

“The carbon problem in the atmosphere is proving to be a much more difficult problem than I think people expected it to be,” said Gary Dirks, chairman of Carbon Collect. “We’re quite literally not making progress at the rate we need to.”

“We need to stop emitting as fast as we can,” he said, “but in the event we overshoot, then we’re going to need something that can bring it back again.”

How the ‘tree’ works

Johnson said the MechanicalTree is the next tool in the toolbox for climate researchers.

To capture carbon, the blue gantry expands the device like an accordion to expose its “leaves” so wind can blow across the CO2, grabbing sorbent, a porous material that looks a lot like moon sand.

“You can see the stainless steel drum there with the lid on top, that gets raised up by the winch up there, up in the air,” Johnson said. “The lid comes off and the discs are attached to it. So it comes up kind of like an accordion.”

When activated, the MechanicalTree stands open for 20 to 30 minutes to catch a breeze.

The sorbent works like a magnet, holding the carbon dioxide like a sponge until the discs are lowered back down into the steel keg. Then, the carbon is stored underground or repurposed for such products as carbonated beverages.

“The goal is to make sure every little tiny bit of sorbent gets exposed to air every time. That way, we’re maximizing the efficiency and the capacity of the system,” Johnson said.

Will it make a dent?

One MechanicalTree is expected to collect roughly 187 pounds of carbon a day. A normal tree only captures 48 pounds in a year.

“It will take millions of trees to make a difference,” he said. “Twelve trees will capture roughly a ton a day. The need for intervention is on the scale of gigatons, meaning billion tons.”

Thirty-five million MechanicalTrees would be needed to begin reducing gigatons of carbon. A gigaton is the same mass as 200 million elephants – a large number that would take years to achieve.

But ASU’s rapid manufacturing could make that deadline more attainable.

“Think of car manufacturing,” Johnson said. “We can learn quickly because we’re making them so quickly, so we can inject that new learning into the production and learn quicker and get down the cost curve.”

And unlike other projects, this one doesn’t rely on anyone being present for the tree to operate.

“We rely on the wind to blow across our sorbent as opposed to the other companies that are doing this all have big giant blowers or they blow the air,” Johnson said. “So we’re trying to avoid that cost.”

The effects of the MechanicalTrees won’t really be seen for five to seven years – the construction takes time, and the project’s future hinges on more investments and federal grants.

But for Johnson, the creation of these trees is personal.

“I’ve got four little kids and I want to be able to tell them I’ve tried to stop some of the bad consequences you’re having to deal with,” he said.

For now, the MechanicalTree team is collecting data on their model in Tempe. It plans to load the tree with sorbent and start collecting CO2 in the next couple months.

If successful, there might be more of these mechanical trees across the nation in the next few years.