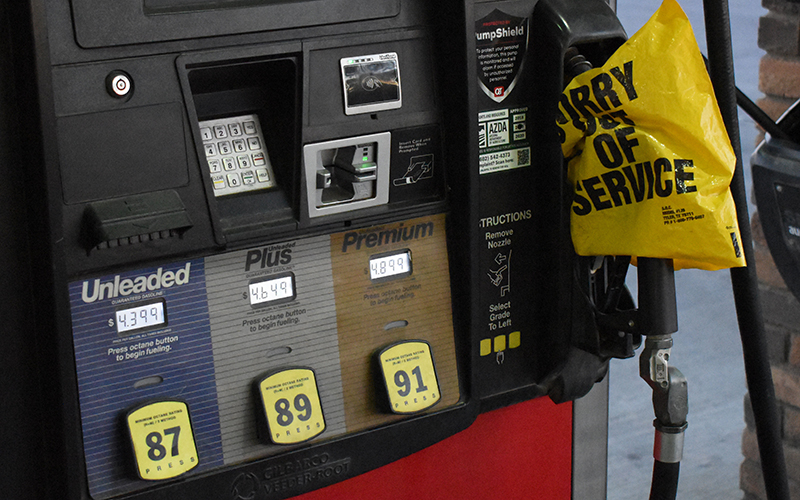 An out-of-service gas pump sits idle at the QT at Germann Road and Arizona Avenue in Chandler on March 15. “The high prices are likely to stick around for not days or weeks, like they did in 2008, but months,” analysts at GasBuddy say. (Photo by Hope O’Brien/Cronkite News) 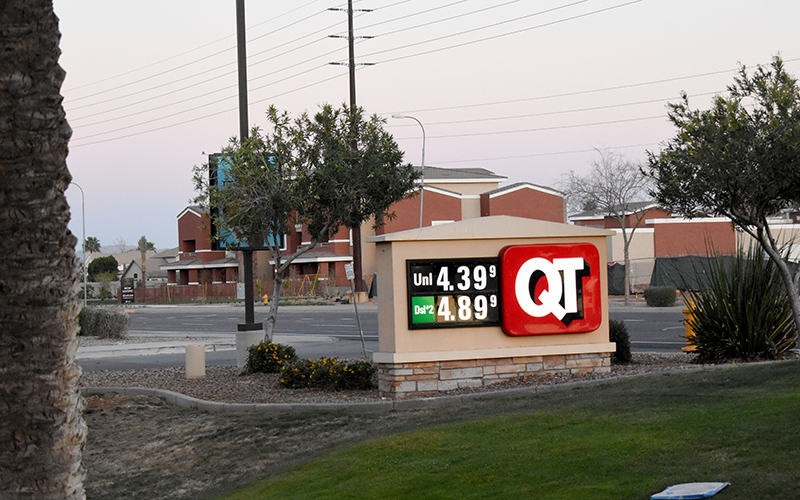 Western states have the highest prices compared to the national average of $4.33 per gallon for regular gasoline. As of Wednesday, Arizona’s average price was $4.62. (Photo by Hope O’Brien/Cronkite News)

PHOENIX – The dramatic rise in fuel prices across the country has prompted ride-hailing companies to add surcharges and pushed commuters to seek more cost-effective methods of transportation. Arizona is among the top 10 most expensive markets for gas, averaging $4.62 a gallon, according to AAA data.

AAA spokesperson John Treanor said fuel prices are determined by the price of crude oil per barrel, which skyrocketed after the U.S. and European countries sanctioned exports of oil from Russia, one of the world’s biggest producers.

“That made the oil prices peak at about $123 a barrel last week; those were record prices,” Treanor said. “Now it’s down below $110, which is significant for what you’re going to pay at the pump, but oil represents roughly 50% of what you pay at the pump.”

Gasoline and diesel prices have been on the rise since last year as pandemic restrictions waned and the economy rebounded, according to the U.S. Energy Information Administration, but the pain at the pump has been acute since Russia invaded Ukraine on Feb. 24.

AAA can’t predict what gas prices will look like in the near future, Treanor said, but when oil prices go up or down, the changes aren’t felt at the pump for a few weeks down the road.

“It’s a dire situation and won’t improve any time soon,” Patrick De Haan, head of petroleum analysis at GasBuddy, said in the statement. “The high prices are likely to stick around for not days or weeks, like they did in 2008, but months. GasBuddy now expects the yearly national average to rise to its highest ever recorded.” 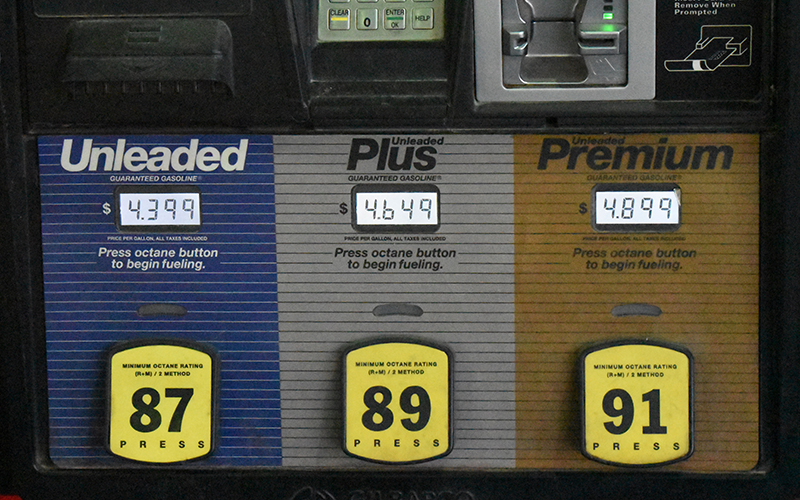 Gasoline prices are higher in the West because most of the nation’s oil refineries are on the East Coast, AAA spokesperson John Treanor says. (Photo by Hope O’Brien/Cronkite News)

The AAA gas prices dashboard shows that California, Arizona and other Western states have the highest prices compared to the national average of $4.33 per gallon, with weekly increases as high as 48 cents a gallon.

Despite increases in gas prices, Treanor said Americans are still traveling during school spring breaks. AAA data says 52% of Americans have plans to vacation this summer, with 42% saying they don’t plan to change travel plans, regardless of gas prices.

But Treanor said airfares may increase, and private ride-hailing services are also going to see some price increases.

Robert W. Mann Jr. is an aviation consultant and principal at R.W. Mann & Company Inc. and told the Washington Post that a 10% increase in airline fuel prices will increase overall costs by 3%, which could cause airlines to either increase rates or add other charges.

Starting next week, Lyft rides will have a 55-cent surcharge for each ride that will go directly to drivers to offset fuel costs, according to a statement from the company. Lyft said drivers of electric vehicles also will receive the surcharge.

“Recent gas price increases are making all types of transportation more expensive,” the statement said. “We’ll continue monitoring gas prices, listening to how drivers are being impacted and finding ways to support them as things evolve.”

Uber also is adding a surcharge of 45 or 55 cents to each trip, depending on location, and UberEats orders will include a surcharge of 35 or 45 cents, according to the company.

“We know that prices have been going up across the economy, so we’ve done our best to help drivers and couriers without placing too much additional burden on consumers,” Uber said. “Over the coming weeks, we plan to listen closely to feedback from consumers, couriers and drivers. We’ll also continue to track gas price movements to determine if we need to make additional changes.” 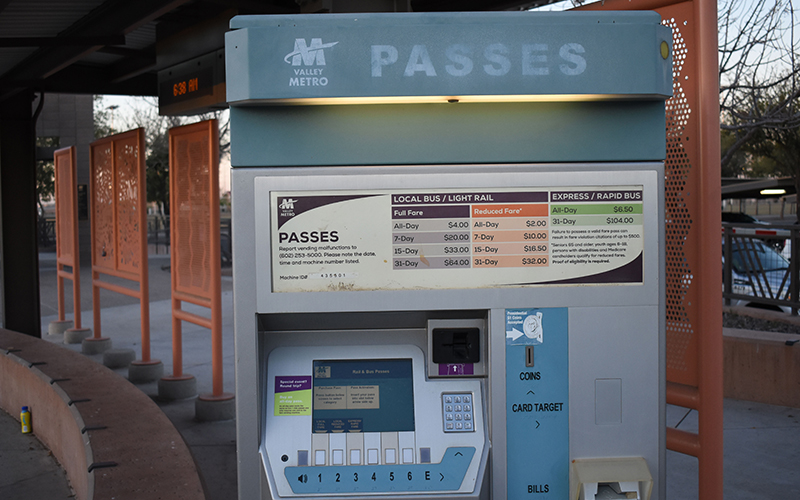 Diane Bohonko, who works for Phoenix, has been taking a Valley Metro commuter bus from Chandler for five years.

“I think there are more people on the bus because gas prices are going up. Before we had eight to 10 people (ride), and now it’s like 10 to 20 every day,” said Bohonko, adding that she’d choose the bus over a private vehicle regardless of fuel prices. 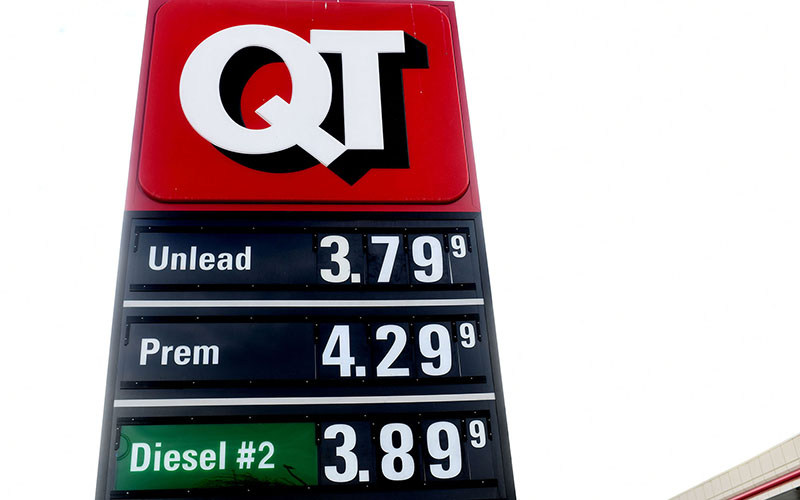 Brittany Hoffman, a public information specialist with Valley Metro, said the agency doesn’t yet have data to show recent growth in ridership, but the numbers had been increasing over the past six months because of loosened COVID-19 restrictions and lower infection rates.

“In past instances when we have seen a major spike in gas prices, we have seen an increase in ridership,” Hoffman said. “Obviously when you’re paying $4 plus at the pump when you could buy a bus or light rail pass for $4 a day, there are some decisions to be made.”

The Phoenix Public Transit Department gets its diesel gasoline for city buses and trucks from a tank farm that pulls fuel directly from a fuel pipeline, so the price fluctuation is much different from what consumers see at the pump.

Although the department “is not immune to the rising gas and energy prices that are affecting many industries right now, our budget can handle it at this time,” public information officer Brenda Yanez said in a statement. “We are definitely keeping a close eye on things.”

Yanez also said there are no plans to raise fares.

“Fare changes are a regional decision and go through an extensive process,” she said. “Fares have not changed in the Valley since 2013.”