WASHINGTON – Arizona lawmakers praised the “bravery” of Ukrainian President Volodymyr Zelensky and most backed his calls to Congress Wednesday for increased military and humanitarian aid to his war-torn country, but they balked at his demand for a no-fly zone.

The comments came after Zelensky, appearing by video from Kyiv, delivered an impassioned and often emotional appeal to the House and Senate in which he implored lawmakers and President Joe Biden to help Ukrainians repel a three-week-old Russian invasion.

Zelensky pleaded for shipments of more aid and military equipment, imposition of greater trade and economic sanctions on Russia and a NATO-enforced no-fly zone in Ukrainian air space.

“Russia has turned the Ukrainian sky into a source of death for thousands of people,” Zelensky said through a translator. “Is this too much to ask? A no-fly zone over Ukraine.”

Arizona lawmakers endorsed the call for more sanctions and more assistance, but many said they would not back a no-fly zone, fearing it could lead to a direct confrontation with Russia. 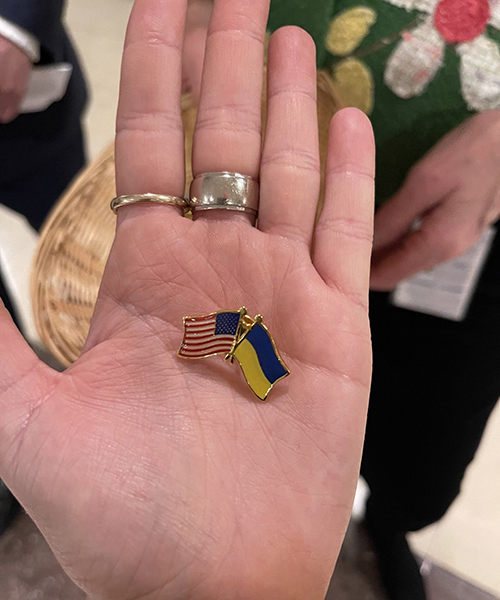 “I don’t support the no-fly zone,” said Rep. Greg Stanton, D-Phoenix, after listening to Zelensky’s address. “The best thing we can do is to hit them (Russia) with hard sanctions and provide them (Ukraine) with the equipment they need to best defend themselves.”

But Stanton agreed with the call for “more significant sanctions against (Russian President Vladimir) Putin and his cronies,” a position repeated by others in the delegation.

“We must continue to be aggressively strategic in how we use our power to help the Ukrainian people stand up for democracy,” Rep. Ann Kirkpatrick, D-Tucson, said in a prepared statement. “We must be incredibly aggressive and unified in our sanctions against Russia, here and across Europe.”

Just hours after the address, Biden announced an additional $800 million in military assistance to “keep a steady flow of weapons and ammunition moving to Ukraine.” The latest shipment will include anti-aircraft and anti-tank weapons, drones, guns, body armor, helmets and ammunition, bringing the total of “security assistance” to $1 billion in just the past week, Biden said.

“The American people are answering President Zelensky’s call for more help, more weapons for Ukraine to defend itself, more tools to fight Russian aggression,” Biden said at a White House event. “And that’s what we’re doing.”

Biden said he is working with Zelensky to deliver additional “longer-range anti-aircraft systems” to Ukraine to help it fend off Russian air attacks. But he declined to answer a question about a Polish plan to transfer some of its Mig-29 fighter jets to Ukraine, a move the administration has said could escalate tensions with Russia.

Biden is scheduled to travel to Brussels next week for a NATO summit on Ukraine.

That meeting will come more than four weeks into Russia’s invasion, an attack that Zelensky likened to the attacks on the U.S. at Pearl Harbor and on 9/11. Millions of Ukrainians have fled the country and an unknown number of civilians and soldiers on both sides have died, as Ukrainian forces have mounted a surprisingly staunch defense against a much-larger Russian force. 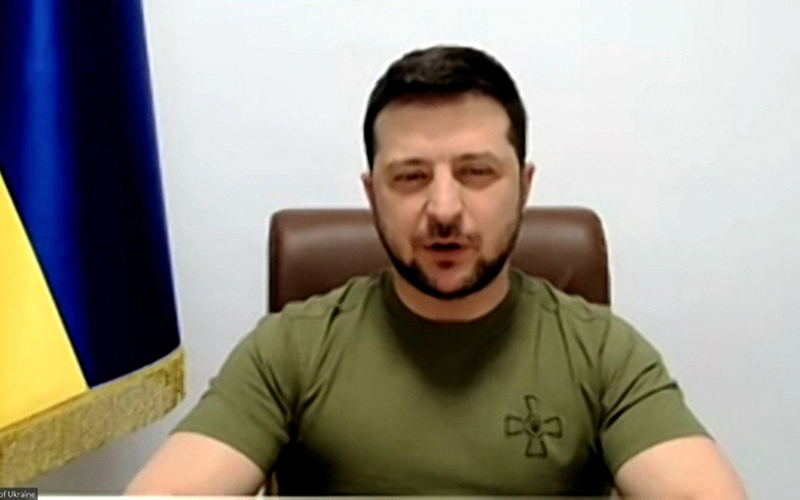 Ukrainian President Volodymyr Zelensky repeated his pleas for a no-fly zone over his country, saying Russia “has turned the Ukrainian sky into a source of death for thousands of people.” (Pool photo courtesy CNN)

Zelensky, in a now-familiar green military T-shirt, told lawmakers that even though he is almost 45 years old, “today my age stopped when the hearts of more than 100 children stopped beating.”

“I see no sense in life if it cannot stop the deaths,” he said in English.

The speech was punctuated by an emotional two-minute video that opened with scenes of Ukrainian cities and families, followed by images of the dead and wounded, and missile strikes on civilian targets.

Wednesday’s speech was just the latest by Zelensky since the invasion. He has also addressed NATO and the parliaments of Canada and the United Kingdom, among others, as he tries to rally other countries to Ukraine’s defense. 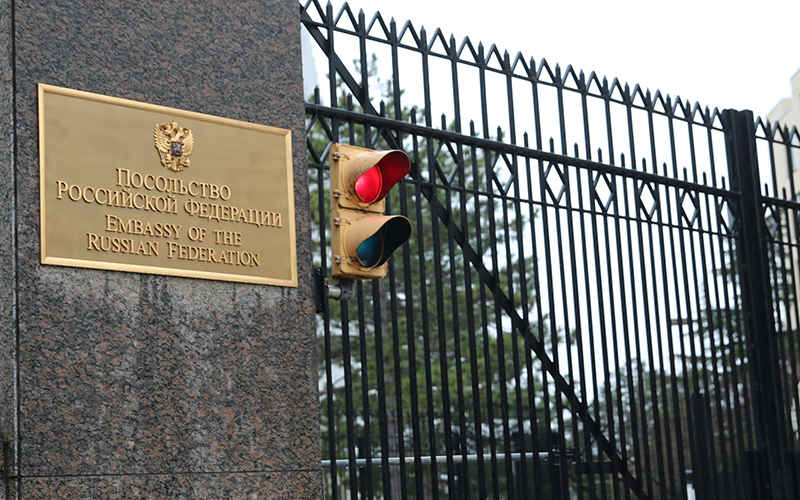 A rapt congressional audience greeted the end of the address with a standing ovation.

“President Zelenskyy has moved nations around the world to understand the Ukrainian struggle, and today’s speech to Congress was no different,” said Rep. Ruben Gallego, D-Phoenix, in a statement following the address. “The United States must continue to stand with our Ukrainian partners and against Russian aggression.”

Zelensky also called on allies to impose stricter sanctions against Russia and anyone “on who this unjust (Putin) regime is based.”

Current Western sanctions target Russian oligarchs close to Putin, suspend access to Western banks and the International Monetary Fund, and ban the import of certain Russian goods – the most-significant of which is Russian oil and gas, a large part of that country’s economy.

Besides depressing the value of the ruble and driving up costs of goods for everyday Russians, the invasion has also led more than 400 Western companies to suspend or scale back operations in Russia.

Biden conceded Wednesday that the sanctions against Russia will probably cost American consumers as well, but he renewed the nation’s commitment to the people of Ukraine.

“This could be a long and difficult battle, but the American people will be steadfast in our support in the people of Ukraine in the face of Putin’s immoral, unethical attacks on civilian populations,” Biden said.