The Pinyon Plain Mine is less than 10 miles from the gates to the Grand Canyon, but it can operate despite a federal ban on new uranium mines on 1 million acres around the canyon, a court said. The mine, first approved in 1986, was grandfathered in before the ban but has not operated in years. (File photo by Chris Cadeau/Cronkite News)

WASHINGTON – A federal court ruled Tuesday that a uranium mine near the Grand Canyon can operate, even though it sits on 1 million acres that the federal government has declared off-limits to new mining.

A three-judge panel of the 9th U.S. Circuit Court of Appeals rejected claims by tribal and environmental groups that the U.S. Forest Service erred when it reviewed the mine owner’s rights to operate the Pinyon Plain Mine, by improperly calculating its potential profitability.

The permit for the mine, formerly known as the Canyon Mine, was first issued in 1986, meaning it was grandfathered in when the mining moratorium near the canyon was imposed in 2012. But operations have been largely stalled for decades by a depressed uranium market.

“We are of course pleased that the 9th Circuit ruled in favor of the Forest Service, so we can advance this clean energy resource under the watchful eye of our state and federal regulators,” said Curtis Moore, vice president of marketing and corporate development at Energy Fuels Resources, which owns the mine.

An attorney for the Grand Canyon Trust, one of the groups suing to block mine, said plaintiffs were “disappointed in the outcome and are evaluating our options.” But other opponents were more vocal.

“Today’s ruling … only deepens our resolve to stop this mine and its deadly pollution threat to Grand Canyon’s precious springs and aquifers,” said Taylor McKinnon, a senior campaigner with the Center for Biological Diversity. 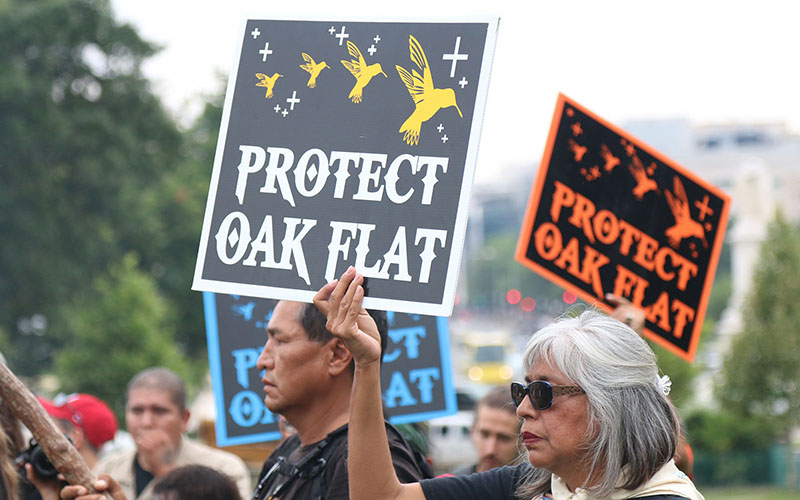 This is the second time the circuit court has considered Grand Canyon Trust v. Provencio, and at least the third ruling it has issued on this particular mine, going all the way back to the 1980s when the project was first proposed.

The Forest Service first approved a plan of operations for what was then the Canyon Mine in 1986, sparking a legal challenge by the Havasupai Tribe. But courts upheld the approval for the mine, and its owner at the time, Energy Fuels Nuclear Inc., began to build surface structures and sink what was to be a 1,400-foot mine shaft.

By 1992, however, falling uranium prices drove the company to suspend operations with just 50 feet of mine shaft drilled.

A spike in uranium prices in 2007 renewed interest in mining and led to “thousands of new mining claims” near the Grand Canyon, according to Circuit Judge Jay S. Bybee’s ruling Tuesday. That led the Interior Department to propose – and eventually adopt, in 2012 – a 20-year moratorium on mining on about 1 million acres.

The government’s review determined that “a valuable mineral deposit” had existed before the moratorium was proposed and that, under market conditions at the time, “the uranium deposit on the claims could be mined, removed, transported, milled and marketed at a profit.”

Opponents sued, claiming that the financial analysis was faulty and that the mine’s approval violated environmental and historic preservation regulations. A district judge threw out the case, and the 9th Circuit upheld most of that dismissal but ordered the lower court to reconsider the Forest Service’s handling of the financial review.

The Pinyon Plain Mine, shown in 2019 when it was still knows as the Canyon Mine, was shuttered by low uranium prices before it could begin production. (File photo by Jake Eldridge/Cronkite News)

The district court again ruled against the opponents, and the circuit court this time agreed, rejecting the claim that the Forest Service should have included “sunk costs” – unrecoverable expenses from the original development of the mine.

Bybee said that Interior Department policy for more than 40 years has been to exclude sunk costs, and that the Forest Service decision was not, therefore, “arbitrary and capricious.”

He cited several other courts which have ruled that counting sunk costs is “‘a foolish notion that should not be entertained by anyone who has had even a single undergraduate economics course.’”

Moore welcomed the ruling, saying carbon-free energy sources like nuclear are seeing a “massive resurgence globally” due to climate change concerns, and the U.S. needs to expand its production of uranium at home to keep up.

“Developing our domestic sources of uranium is becoming increasingly important due to America’s current overreliance on Russia and its allies for our uranium and nuclear fuel,” Moore said.

But McKinnon questioned the need for mining near the iconic Grand Canyon, which she said will only worsen environmental problems in the watershed.

“Aquifer pollution would be impossible to clean up,” McKinnon said. “It’s not a risk worth taking, and no amount of uranium industry drivel will change that fact.”