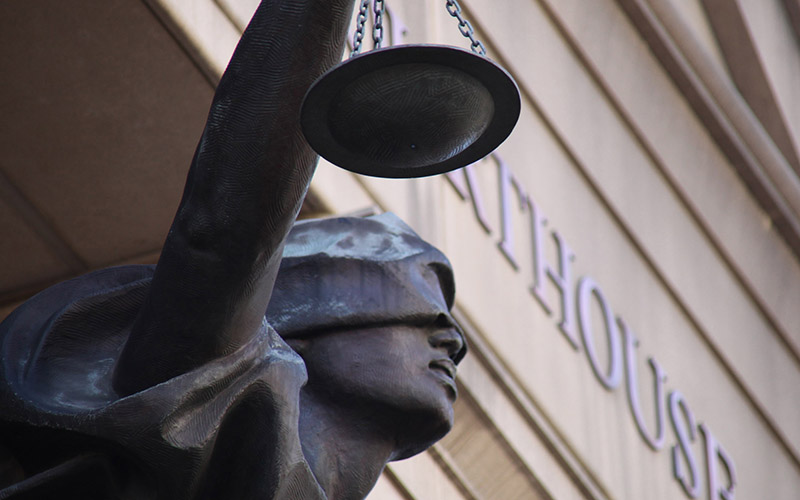 A federal circuit court panel reversed the kidnapping conviction of a Navajo man, saying the charge could not be separated from the assault charge he faced. But the same panel upheld Giordano Jackson’s murder conviction in the 2017 beating death of his girlfriend. (Photo by Tim Evanson/Creative Commons)

WASHINGTON – A federal appeals court ruled that a Navajo man who held his girlfriend while he assaulted her cannot also be convicted of kidnapping, saying such an expansion of kidnapping would lead to a “steroidal version” of assault laws.

The ruling Thursday by a 9th U.S. Circuit Court of Appeals panel let stand the assault conviction against Giordano Jackson but reversed his kidnapping conviction in the 2017 beating of his girlfriend, Alvina Nez.

Jackson was later convicted for Nez’s murder in a separate assault and is serving a life sentence on that charge. The court Thursday upheld that conviction.

“This case requires us to define the limits of kidnapping,” said the opinion written by Circuit Judge John B. Owens. Even though the standard for kidnapping only requires a “seizure,” he wrote that the seven minutes that Jackson held his girlfriend while severely beating her “is a far cry from the ‘substantial period of time'” that is required for a kidnapping.

The U.S. Attorney’s Office declined Friday to comment on the ruling. An attorney for Jackson did not immediately respond to requests for comment.

The case began in July 2017 at Nez’s father’s home on the Navajo Reservation. Nez’s son and his cousin heard what they first thought was laughter, but when they went outside they saw Jackson beating Nez and trying to yank her from a car.

The boys ran inside to wake their grandparents, and Nez’s father came out to find Alvina bloodied and beaten on the ground by the car, stripped to her underwear. He ordered Jackson off the property.

The court said Alvina had “scratches and bruises on her arms, legs and face, a black eye, blood dripping from her nose and a bald spot on her head” caused by Jackson trying to pull her by her hair into a nearby hogan.

Jackson was charged with assault resulting in serious bodily injury and kidnapping, and convicted after a trial in which the evidence presented by Nez’s father and the boys was “largely uncontroverted.”

Jackson’s attorney conceded that the evidence was sufficient for an assault charge, but not for kidnapping, saying that “whatever seizure occurred, it certainly didn’t occur beyond whatever beating there was.”

But the trial judge agreed with the prosecutor that all that is needed for a kidnapping charge is “a restraint on someone’s freedom of movement, preventing somebody from leaving if they want to.”

On appeal, the 9th Circuit said courts have to be careful to limit the use of kidnapping to “appropriate circumstances.” Otherwise, prosecutors would have “unfettered discretion to charge the same conduct, such as impeding certain individuals, as a mere misdemeanor or a life imprisonment felony.”

Owens noted that prosecutors conceded at argument in Jackson’s appeal that the theory of kidnapping under which Jackson was convicted could allow “a garden-variety, three-minute robbery could be a kidnapping.”

The appeals court focused on the fact that the assault lasted just six or seven minutes and that the actions did not reflect “the essence of kidnapping.”

“The primary conduct here was an assault causing serious bodily injury, which inherently requires the defendant to keep the victim in close enough proximity to inflict the injuries,” Owens wrote.

“The conduct here did not go beyond that,” he wrote. “No additional holding occurred; the assault involved no asportation, no external restraints, no planned detention, and no restrictions on movement beyond the beating itself.”

Owens wrote that jurors “properly convicted” Jackson of assault, but that the facts could not support a kidnapping conviction.

Two months after the assault, Jackson beat Alvina to death in his house in Teesto and attacked responding Navajo police officers with a machete. He was convicted of first-degree murder and assault with a deadly weapon in that incident and was sentence to life in February 2019.

“There comes a time when a person forfeits his right to walk among society,” U.S. District Judge Diane Humetewa said at his sentencing. “Mr. Jackson, your time has come.”

Jackson also appealed his murder conviction, but the same 9th Circuit panel affirmed that conviction in a separate ruling Thursday.