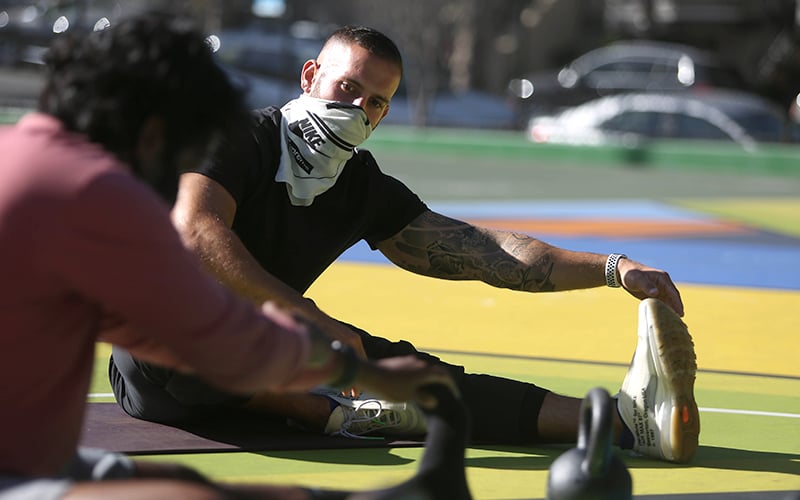 Like most businesses, the fitness industry took a hit during the pandemic. Some personal trainers started offering their services outside. (Photo by Lea Suzuki/The San Francisco Chronicle via Getty Images)

PHOENIX – It was a brisk morning in Tempe. Nahmir Collier-Hack, 26, stepped out of his white Acura and walked through the doors of the private gym where most people know him as Naz. A personal trainer, Naz has been working at the gym for a little over a month.

His client, a man in his 60s, leaped out of a chair as soon as Naz came in, ready to get his session going.

Remixes of Flo Rida songs echoed throughout the gym, “almost like the DJ just threw some random popular songs over a bunch of different beats,” Naz joked.

Naz is fortunate to be working. Like most businesses, the fitness industry took a hit during the pandemic. About one in five health clubs have shut down permanently since March 2020 in the U.S., with over $29 billion in revenue lost, according to findings reported in August by the National Health & Fitness Alliance. Most other gyms and fitness centers closed their doors temporarily, which forced people to find new ways to get the training they needed.

The pandemic led to a rise in sales of advanced in-home fitness equipment, virtual physical therapy and online training sessions, an industry that, before the pandemic, was valued at $6.04 million. It is now estimated to be worth $59 million by 2027, with changing habits caused by the pandemic driving its growth.

Naz also trains people virtually – and that has its own set of difficulties. It isn’t as easy to see someone’s form through a screen.

At the gym, Naz intently observed how heavily his client was breathing during each exercise so that he could gauge how long the client needed to rest. When the client performed dumbbell presses, Naz squatted within two feet of his forehead, watching every slight movement he made and adjusting his form.

The man, Naz said, “has had forearm issues in the past, and I noticed that he grabbed at it after that first set.” Naz added that he probably wouldn’t have noticed his client’s distress if the session had been conducted over FaceTime.

“I always ask clients how they feel after an exercise, but some try to tough it out and not tell me, which can lead to further injury,” Naz said.

Naz recalled another time where an online client was squatting and using too much of their knees. He had to stop and explain to them to focus the weight on their heels, and not the balls of their feet. In person, he would have pushed on the client’s heels to correct the movement without needing to say a word.

Online, Naz said, he needs to use his words more, demonstrate more and pay more attention to what he observes on the screen. He keeps an eye on the way his clients’ chests move, looking for signs of exhaustion before they stop and maybe bend over, hands on their knees, unable to continue.

“It’s tough to see those little factors that make such a big difference,” Naz said.

There are over 475 million posts on Instagram that use the “fitness” hashtag, a lot of them featuring rock-solid six-packs, personal squatting records and deadlifts with a crazy amount of weight. It can be daunting for anyone wondering where to start, how often they should train or how to choose the right trainer.

Naz and Bryce Redaja, a personal trainer based in Tempe, have conducted business virtually since the pandemic hit, and they’ve grown to like it over time. Working online gives them more freedom, more time with clients and more money, they said.

Gym owners blindsided by Ducey’s order to shut down

Redaja, 26, launched his online training business three months before the pandemic while still training clients in person. At the gym, he said, he would make less than $35 a month from a single client because the gym kept most of the money the client paid for the session. Because he’s his own boss online, he makes anywhere between $40 and $80 per client each week, he said.

There’s also the convenience. He said he can run the dishwasher while guiding a client through a series of exercises.

One of Redaja’s clients, Padmaja An, 31, began training with him in early 2021. She chose to train online because gyms were shut down and she wasn’t happy with how she looked. She had some equipment at home and “wanted to give it a shot,” she said.

She was determined to take her living room and transform it into a makeshift gym. “I wanted to stop thinking about my living room as a place of leisure and comfort,” she said.

While she had limited experience training in a gym before going online, she feels that training online is much easier. All she needs is an internet connection and a reminder on her smartphone.

She doesn’t need a high-five after every workout. Being active is enough to empower her, she said.

“Every time I finish a workout, it makes me believe that I’m (able) to make a change that lasts a lifetime,” An said.

Naz began studying athletic training in 2014 at Temple University. He was an athletic trainer for two years working in rehab and corrective exercise until his senior year in 2016, when he started doing fitness training with the Temple basketball team. The assignment allowed him to dip his toes into another side of fitness as he explored the world of nutrition and strength training.

He was a self-described “chubby kid” for most of his teenage years. When he began working out, he was amazed at his body’s transformation and loved the extra confidence that came along with it.

“I started to crave wanting to see that in others,” Naz said.

He moved to Phoenix in 2018 and started his own personal training business. Things were going well until the onset of the pandemic. Gyms closed, clients canceled sessions and Naz was forced to adapt.

He moved most of his business online, dusting off his skills from the lessons he had learned from teaching a client virtually for 10 days in 2019. At the time, his client went on vacation and didn’t want to interrupt his training for a marathon.

At first, Naz hated it.

“I am just sitting here watching them run and I can’t really see (their) form,” he said. “You can’t tell how hard the person is working. You can’t see the sweat.”

He started exercising with some clients virtually to get a better idea of when they needed a break or could push harder. For example, he might use the same weight the client is using while keeping his own fitness level in mind. If he gets fatigued, he knows the client is likely tired, too.

Out of necessity, Naz became proficient at finding ways to work out at home without any professional exercise equipment. Something as simple as a lamp can be used as a shoulder press.

“I can look at anything in a room, and be able to make an exercise out of it,” he said.

Within a year, Naz was training dozens of online clients each week. Virtual training sessions allowed him to expand his reach to customers in Chicago, Philadelphia and even as far as India.

Athletic trainers aren’t the only people employed by gyms that have been affected by the pandemic. Physical therapists have also had to adapt. Since March 2020, Scottsdale-based John LaRue has been conducting sessions virtually. He uses a program called Telehealth, part of the telemedicine approach that allows medical professionals to reach clients in places where doctors are not readily available. Instead of relying on devices to measure movement, LaRue must use his own judgment and a lot of visual estimation to treat his patients.

“You have to embrace how you watch somebody move, and you cannot use confusing language,” he said. “In person, I can say less, and move you more.”

To get a better idea of the patient’s health, he’ll ask questions like, “When did the pain originate?” and “Where do you feel the pain?” And instead of guiding a client’s stretch in the same room as he usually would, he might tell a client to “reach out and stretch out” the arms “all the way almost so that I can see your elbow joint” while also doing the movement so that the client can see what he is talking about.

Making sure a client maintains proper form is a challenge for every trainer. The biggest risk in training and guiding physical therapy sessions virtually is aggravating an existing injury or triggering a new injury.

Naz said the inability to read someone’s body language is something he has struggled to adapt to while training online. Observing his clients’ body language as they walk in allows him to ascertain how they’re feeling, he said. When someone has their head down and shoulders shrugged forward, he knows to give them a longer warm-up to allow them to relax and get limber.

However, when training people virtually, some put on the facade of being ready to work out when they may not be. So Naz has had to learn to be more observant and listen more carefully. He will pay attention to posture and tone of voice for signs of exhaustion or stress. Sometimes, all a client needs is to curse out their boss to release some tension before they get started, he said.

When you walk into a room and shake his hand, it is easy to tell that Naz is a people person. Virtually, though, he needs to get his personality across while “not seeming fake,” he said. He has to combine the “let’s get this workout going” persona, he said, with the “goofy guy that still has time to joke in-between each set.”

He is ending the year with 11 online clients, doing what he loves for a living. And all it requires is his computer and a yoga ball. 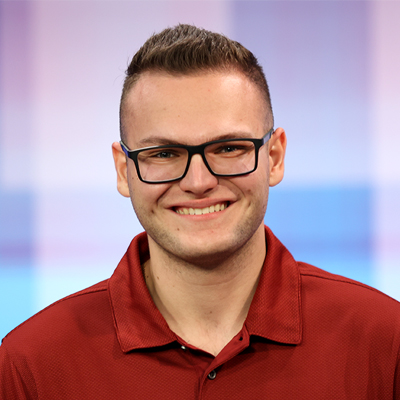 Michael Garaffa expects to graduate in spring 2023 with a bachelor’s degree in sports journalism. He is working for the Phoenix sports bureau.