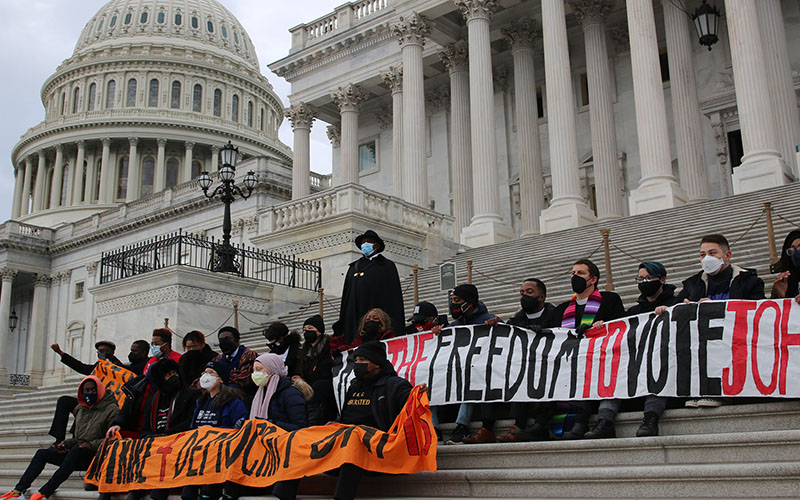 Voting rights activists, some of whom began a hunger strike last week, rallied on the steps of the U.S. Capitol as the Senate began debate Tuesday on a package of voting rights bills. (Photo by Reagan Priest/Cronkite News) 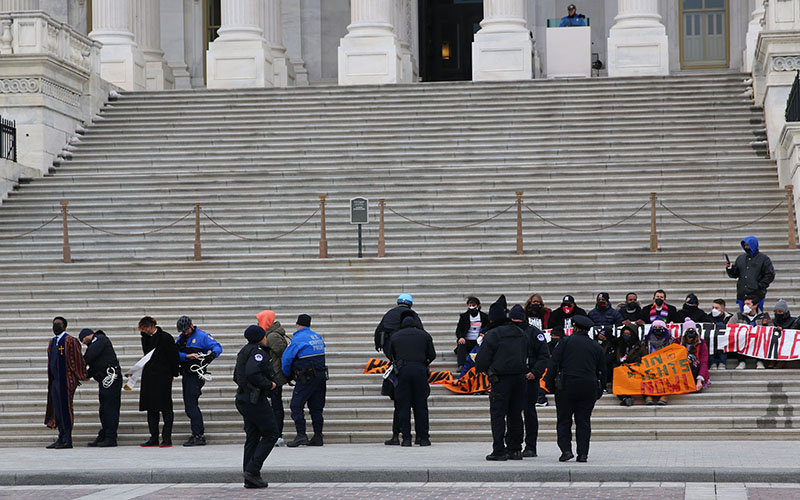 WASHINGTON – Tempe resident Brandon Ortega has been on a hunger strike for six days now and pledged Tuesday he will continue fasting for as long as it takes the Senate to pass a pair of voting rights bills.

He could be in for a long fast: Analysts see little hope that Democratic senators can end a GOP filibuster of the bills, in part because Arizona Democratic Sen. Kyrsten Sinema will not back a change in Senate rules that would let that happen, even though she said she supports the bills.

Ortega is in Washington with a group of activists, 29 of whom were arrested on the Capitol steps Tuesday as the Senate began consideration of the Freedom to Vote Act and the John Lewis Voting Rights Advancement Act. Both measures have already passed the House.

“(Sinema) has told me face-to-face that her biggest heroes are John Lewis and (former Arizona Sen.) John McCain … my heroes as well,” Ortega said. “They were huge advocates for voting rights and campaign finance (reform), so if she wants to be remembered as they were, as heroes, the choice is pretty clear.”

Sinema’s office did not respond to requests for comment Tuesday, and she was not one of the senators who took to the floor for what is expected to be the first of two days of debate. 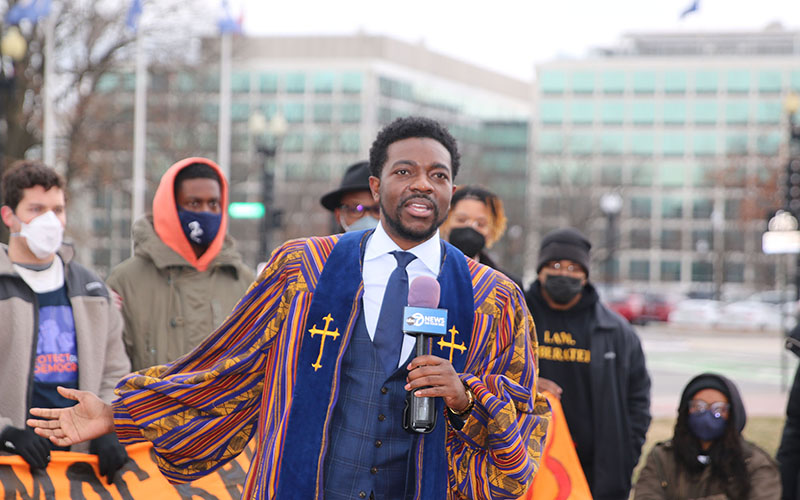 The Rev. Stephen Green of St. Luke AME Church in New York, and chair of the group Faith for Black Lives, speaks Tuesday to voting rights activists before they headed to the Capitol to be arrested. (Photo by Reagan Priest/Cronkite News)

The Freedom to Vote Act includes a sweeping array of changes, requiring states to offer early, in-person voting, prohibiting onerous mail-in voting requirements, easing voter ID requirements and making Election Day a federal holiday, among other changes. The John Lewis Act would restore part of the Voting Rights Act that requires states with a history of voting discrimination to clear any changes to their voting laws with the Justice Department.

Republican senators called the bills a federal intrusion in to states’ rights to set election laws. But Democrats – including Sinema last week – said federal law is needed to reverse efforts in Republican-led states to make it harder for minority voters to cast a ballot.

The voting rights advocates who were arrested during a peaceful protest invoked a phrase used by Lewis, a civil rights activist and longtime Democratic congressman from Georgia, who encouraged protesters to get into “good trouble” for a just cause.

“Before the Senate gavels in, we are getting ready to depart from this place and get into some good trouble,” said the Rev. Stephen Green, the chair for Faith for Black Lives, before heading from a news conference at Union Station to the Capitol to engage “nonviolent civil disobedience.”

“As long as they refuse to honor our commitment to the ballot box, we will encourage folks across this country to stop; we will put a full stop on this country until justice rolls down like water and righteousness like a mighty stream,” Green said.

Joseline Garcia, the co-founder of Un-PAC, which is supporting the hunger strikers, said they are nonpartisan and she encouraged Republican lawmakers to support the bills she said are supported by a majority of Americans.

But the Senate is not likely to agree. If Democrats could get a vote on the bills, they would likely be able to muster the 51 votes needed to pass them. But it takes 60 votes to end a filibuster and bring the bills up for a vote, something not likely to happen in a Senate split 50-50 between Republicans and Democrats.

Michael Sozan, a senior fellow with the Center for American Progress, blasted Republicans for “filibustering, blocking, even the debate of voting rights legislation.”

“There has to be a way to actually debate and pass legislation that by the way, is supported by a majority of people in this country,” he said.

But Sozan said this latest skirmish may not be the end of the fight, with a chance that the bills could still reach the Senate floor later in the session.

“The more that senators hear the demand from Americans, and the more that it is debated on the Senate floor, I remain optimistic that they can get to the top of the summit,” Sozan said. 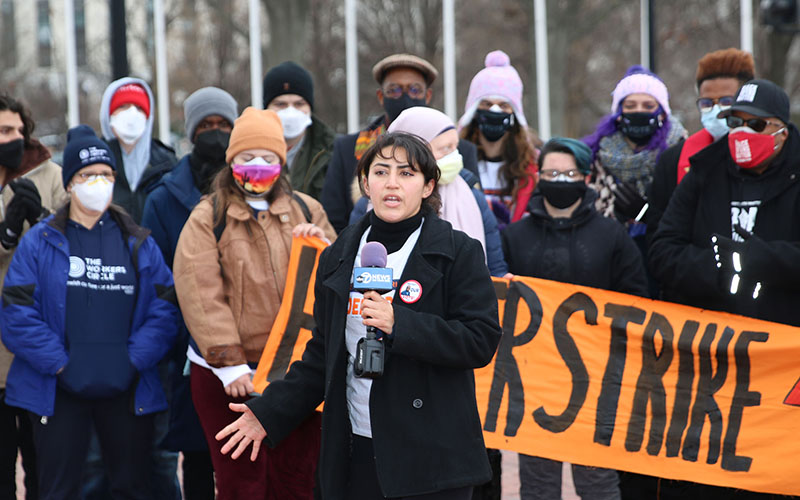 Joseline Garcia, co-founder of Un-PAC, one of the groups whose members have launched a hunger strike to support voting rights bills, speaks Tuesday outside Washington’s Union Station. (Photo by Reagan Priest/Cronkite News)

Ortega, a student at Arizona State University, said the bills are important in Arizona because they would curb some of the slew of voting restrictions passed by state lawmakers last year, including SB 1485. That law makes it easier for county officials to remove voters from the state’s permanent early voting list, which would otherwise automatically send them a mail-in ballot for any election.

By prohibiting onerous requirements on mail-in balloting, Ortega said, the Freedom to Vote Act would counteract SB 1485, one of the reasons he became involved in the fight.

“It doesn’t matter which state this is happening in, if it happens in one state, it’s going to happen all across the nation,” Ortega said.

The latest hunger strike is not his first. Ortega, who was not among those arrested Tuesday, was one of 20 Arizona college students who mounted a 15-day hunger strike in December to bring attention to the issue of voting rights. He said Tuesday that fasting this time around has made him tired and uncomfortable – and worried his parents – but that he and the others are not about to give in.

“We’re willing to put our bodies on the line because our futures are hanging in the balance,” he said. “And it is now or never.”