Sen. Kyrsten Sinema, D-Arizona, in a 2019 file photo, angered fellow Democrats on Thursday when she took to the Senate floor to say she would not vote to do away with the filibuster – which Republicans have been using to block voting rights and other legislation in the evenly divided chamber. (File photo by Keerthi Vedantam/Cronkite News)

WASHINGTON – Sen. Kyrsten Sinema, D-Arizona, took to the Senate floor Thursday to say she will not vote to do away with the filibuster, likely dooming the voting rights measures she said she supports.

“While I continue to support these bills, I will not support separate actions that worsen the underlying disease of division infecting our country,” Sinema said during a 19-minute speech that called for both parties to come together.

The move was not a surprise – Sinema has steadfastly opposed ending the filibuster – but it came as Democrats were mobilizing to push through voting rights measures ahead of Martin Luther King Day and President Joe Biden was on Capitol Hill to lobby senators in person.

After an hour on the Hill, Biden conceded Thursday that he was not sure Democrats would be able to pass the legislation.

While Biden continued to negotiate Thursday evening, however, advocates and Democratic activists in Arizona blistered Sinema for her announcement.

Arizona Democratic Party Chair Raquel Terán said in a statement that party members “cannot claim to be advocates for civil rights while maintaining the filibuster,” which is being used by GOP senators to block voting rights bills already passed by the House. “We are disappointed to say the least that she has chosen to protect an antiquated rule over her constituents,” Terán’s statement said.

Outside the Capitol Thursday, Sinema was a frequent target of protesters and hunger strikers who had come to Washington to demand action on the voting rights bills. 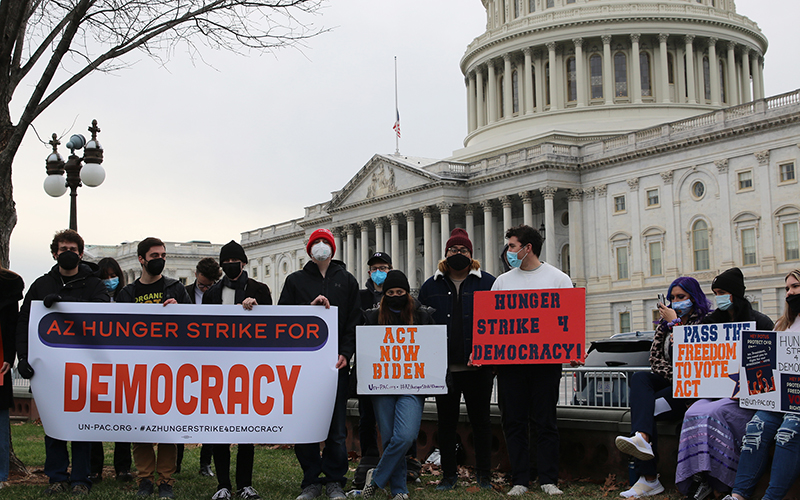 Protesters with the Arizona Hunger Strike for Democracy came to Washington to engage in a hunger strike in an effort to force Congress to take action on voting rights legislation that has stalled in the Senate. (Photo by Emily Sacia/Cronkite News)

Phoenix native Brandon Ortega was one of 40 protesters who are on an “indefinite” hunger strike to force congressional action on the voting rights bills.

“Ultimately, it is the Senate’s responsibility to make sure this bill passes,” said Ortega, an Arizona State University student. “We’re here in D.C., outside of the Senate building, to hold them accountable to their actions.”

The voting rights legislation has become highly partisan on Capitol Hill. Earlier in the day Thursday, the House voted along party lines to pass the “Freedom to Vote: John R. Lewis Act,” with 220 Democrats supporting and 203 Republicans opposing.

The 735-page bill would force a range of changes on state elections, touching on everything from redistricting to voter identification. It would set early voting times, limit purges of voter rolls, allow for same-day registration, set standards for mail-in balloting and make Election Day a federal holiday, among other measures.

But previous voting bills have stalled in the evenly divided Senate, where Republican lawmakers have accused Democrats of interfering in the states’ rights to set election standards.

Democrats could pass the bills if they came up for a vote – Vice President Kamala Harris, a Democrat, would cast the deciding vote if the Senate was split 50-50. But as long as the filibuster remains, Republicans can indefinitely delay any action on voting rights – or any other legislation bills – unless 60 senators agree to end debate.

Sinema said she “shares the concerns of civil rights advocates” who say that new state election laws are aimed at disenfranchising minority voters, and that she will “strongly support and will continue to vote for legislative responses to address these state laws.” But she said she will not end the filibuster to get there. 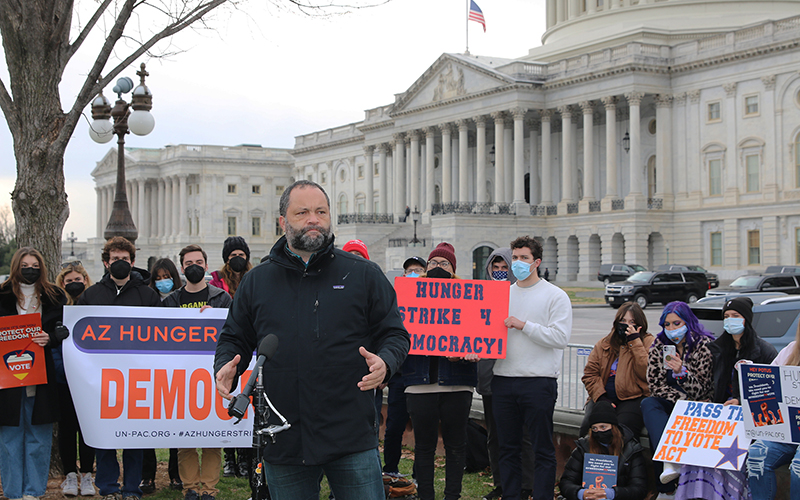 People for the American Way President Ben Jealous speaks Thursday at a rally outside the Capitol in support of Democratic voting rights legislation. It passed the House Thursday, but stalled in the Senate when Sen. Kyrsten Sinema, D-Arizona, said she would not vote to end the filibuster. (Photo by Emily Sacia/Cronkite News)

Sinema has said before that she supports the filibuster because it gives the minority party – and their constituents – a voice in the deliberations.

“What is the legislative filibuster other than a tool that requires new federal policy to be broadly supported by senators representing a broader cross-section of Americans?” she asked on the floor.

She said the filibuster’s 60-vote threshold “ensures that millions of Americans represented by the minority party have a voice in the process” and that it protects the country “from wild reversals in federal policy.”

Political analysts said that while Sinema’s decision Thursday angered fellow Democrats, it was not surprising for the senator who has painted herself as a centrist.

Nathan Gonzales, editor and publisher of Inside Elections, said Sinema’s decision “is probably a combination of factors, including representing a competitive, evenly divided state and her not feeling the pressure of running for reelection immediately.”

“I mean, she’s not going to face voters for another three years,” Gonzales said.

With Arizona becoming a battleground state in recent elections, Sinema’s decision might have been a smart play to appeal to both sides of the aisle, said J. Miles Coleman with Sabato’s Crystal Ball at the University of Virginia Center for Politics.

“This could be something that, looking to 2024, ends up kind of brandishing her credentials to some of those swing voters and even potentially some voters who may be normally conservative,” Coleman said.

“We have the right to expect action from a majority of our elected legislators,” Scheel said. “To basically say that you won’t even consider something because of an arcane, unwritten rule, it’s bad for democracy.”