Nearly two years into the pandemic, theaters and performers adapting to the ‘new normal’ 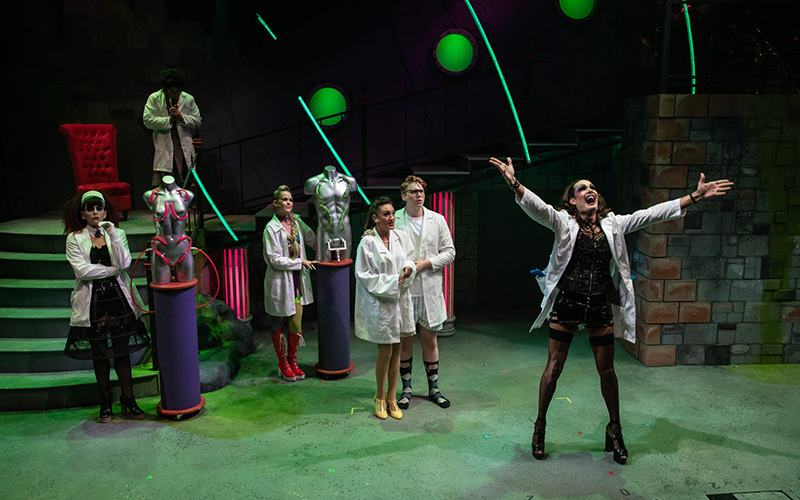 PHOENIX – Nostalgia and relief overcame actor Kade Bailey the first time he returned to an auditorium stage after COVID-19 shut down most facets of American life.

Standing in the wings for Phoenix Theatre Company’s production of “The Rocky Horror Show,” Bailey was unsure about how the pandemic may have changed performances. But the moment the curtain rose and the first note struck, he was ready to get back out there.

“You miss that feeling so much when you’re out of it for as long as we were during COVID,” said Bailey, who plays Brad Majors, the protagonist and naive good guy. “You don’t really remember exactly how you feel until you’re back right in that situation.”

From local playhouses to the fabled venues of Broadway, live theater was among the industries hardest hit by the pandemic. Since 2020, many companies have had to furlough staff members, cancel performances and forgo various planned events.

But for the first time in almost two years, companies are finding ways to make sure the show goes on. The COVID-19 protocols they have come up with differ depending on the company and theater.

For the Phoenix Theatre Company, which was founded in 1920, this includes strongly recommending audience members wear masks and scheduling specific performances where masks and proof of vaccination are required. The theater also has hand sanitizer stations, temperature checks at the door, contactless program and ticket options and heightened cleaning and air filtration.

“We are trying to be as accommodating to as many people as possible with our current policies,” said Luis Terrazas, director of patron experience at Phoenix Theatre.

Bailey said the cast and crew of “The Rocky Horror Show” are fully vaccinated and get tested three times a week.

Phoenix Theatre has put safety measures in place so that everyone, onstage and off, can feel safe, Bailey said, and so the production can make it through the whole eight-week run with “as few speed bumps as possible.”

“It’s really nice knowing that we’re more than just actors to the company,” he said. “We’re all real people who have to be taken care of, and our health is important.”

Phoenix Theatre’s 2021-22 season of indoor productions began in August, but other companies’ seasons are still up in the air.

Theater Works in Peoria is still planning for its season.

Before the pandemic, the organization produced 23 plays a year, but that won’t be the case for the upcoming season, said Cate Hinkle, managing director at Theater Works. They still don’t know what the reduced number will be.

Although the productions aren’t set in stone, certain protocols are being considered, such as mask wearing, allowing a more flexible approach but still following guidelines set by the Centers for Disease Control and Prevention, Hinkle said.

“Theater Works is all about creating a space for access and that means as an audience member, onstage,” she said. “However you want to engage with us, we’re here for the community.”

The coronavirus that causes COVID-19 is not going away any time soon, Hinkle said, and this is making theaters adapt to the “new normal.”

“I think it’s an exciting time; it’s a time of rediscovery, it’s a time of thoughtfulness and intention,” she said. “There is a lot of excitement for the future.”

The changes especially affect such productions as “The Rocky Horror Show,” a campy, cult classic whose appeal is based on extensive audience participation. Audience members shout out calls and responses to iconic lines, sing along to the musical numbers and dance the “Time Warp.” Some productions even bring attendees onstage for certain songs and scenes.

Phoenix Theatre had to figure out how to keep that immersive magic while social distancing at the same time.

Whether the mad scientist Dr. Frank N. Furter shoots a sideways glance at a loud patron or the audience takes part in the show’s famous callbacks, Bailey said, the troupe has been able to maintain a strong level of interaction.

“It doesn’t really feel like anything is missing because of the fact that we can’t bring anyone onstage,” he said. “It still allows for the audience to have that ‘Rocky Horror’ experience they’re looking for while also keeping all of us safe.”

Like other theaters in Arizona, Phoenix Theatre created an outdoor experience in response to the pandemic. But Terrazas said there’s no better feeling than coming back into the theater, metaphorically and physically.

“Coming back indoors it was like finding our feet again and basically starting anew,” he said.