PHOENIX – It’s the holiday season, but not everyone is merry and bright. That’s because holiday shoppers are paying higher prices and seeing a few more empty shelves this year thanks to a “global supply chain crisis” – a phrase that’s become all-too-familiar at dinner conversations.

And as Americans continue to face empty shelves and rising prices as 2021 draws to a close, experts are looking at causes and potential solutions.

COVID-19 was the catalyst for this widespread series of supply bottlenecks, but these constrictions have affected nearly every sector of the economy – from shipping and trucking to manufacturing and storage.

And, most of all, it’s a problem that affects everyday consumers, such as Becky Andrews, a central Phoenix shopper.

“Overall, the prices have jumped,” she said. “I came to get (an item) and it was $3 more than what it was before, and I just didn’t get it. So, I think, this is going to hit a lot of families.”

Two of America’s largest seaports, the Port of Los Angeles and the adjacent Port of Long Beach, are experiencing delays in shipping, but that’s not the only issue. Some experts say the delays in these two Western ports might be indicative of a logistics system rapidly pushing to correct itself.

More in the series:

“We’re not actually seeing that supply chains are failing,” Rogers said in a November lecture at Arizona State University. “I think, in many ways, we are seeing sort of a heroic effort in the face of this unprecedented demand that we are dealing with right now.

“Partly we’re dealing with this demand because we are trying to catch up from a hole we got in, and partly because Americans have a lot of money in their pockets right now. … People aren’t going on trips, they aren’t going places, they are spending all their money on goods.”

With more cargo container ships than ever sailing into American ports to feed this demand, the U.S. needs more infrastructure to load and unload cargo, more space to store products, more trucks and trains to transport goods across the country, and more factories.

Bolstering each of these processes presents its own issues: loading and unloading cargo requires both machinery and workers, and more storage space requires investment in land adjacent to shipping and e-commerce centers. Truckers are in short supply, fuel costs are rising, and a semiconductor shortage is stalling the production of new trucks. Moreover, manufacturing, an industry that favors efficiency over flexibility, according to Rogers, faces delays because of oversea factory shutdowns related to COVID-19.

“Really, there is a series of issues we are having,” he said. “First is, much of the capacity in Asia right now isn’t online. … They are shutting down factories in China, Vietnam and all over the place. 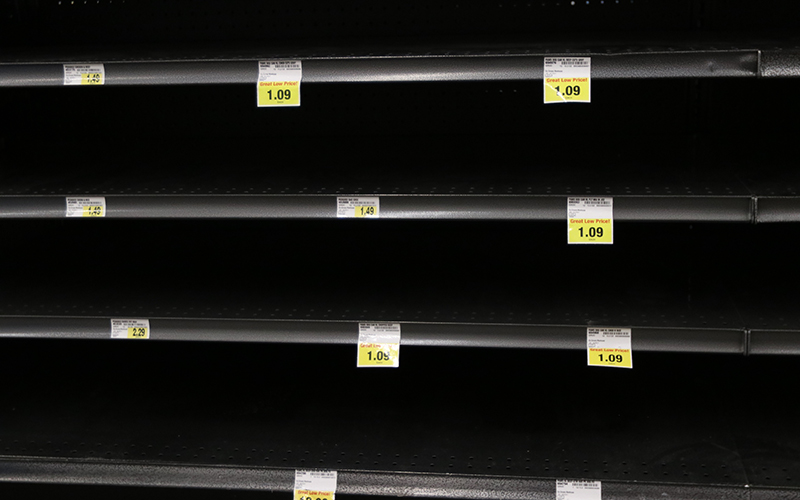 Some grocery store shelves remain empty because of bottlenecks in the supply chains that ship goods around the world. (Photo by Ella Ho Ching/Cronkite News)

These bottlenecks in the supply chain have created one of the largest price increases to consumer products seen since 1990 – a 6.2% increase over the past 12 months for all goods, according to the Bureau of Labor Statistics’s October consumer price index.

Dependency on foreign exports seems to be a repeated issue of concern among experts dealing with the supply chain crisis.

In October, “we ran a $100 billion trade deficit because of our dependence on imports,” said U.S. Rep. Peter DeFazio, D-Ore., chair of the House Committee on Transportation and Infrastructure, in a mid-November hearing. “Ocean shipping costs are up 500% in the 12 months; the West Coast is inundated with foreign imports.”

The leading cause, the congressman said, is a lack of federal oversight in the shipping sector and decades of “disinvestment” in American infrastructure led by private shipping and logistics organizations outsourcing manufacturing overseas.

Rogers said the answer to the crisis is threefold:

He said the United States is lagging behind on diversification of its shipping system, which he called a requirement for the modern era.

“We’re doing all of this with this old infrastructure. And this speaks to, for supply chains – that good is the enemy of great. We’ve been able to get through, and so we’ve been dealing with suboptimal routes and capacity for a long time,” Rogers said.

“COVID is really the wake-up call that we need. With COVID, it’s not just a virus to immune systems … in many ways it has acted as a virus to supply chains. … But if you survive it, you come out of the other side stronger.”

Dave Wells, a research director from the Grand Canyon Institute, a nonpartisan think tank, thinks paying truckers more to help attract and retain them might help move goods easier amid the crisis. The trucking industry historically has had a driver turnover rate, studies show, and it was 87% in 2021.

“This is sort of a challenge where certain suppliers are having a hard time hiring sufficient workers,” he said. “Truck drivers, in particular, need special credentials to pick up shipments that are coming in from overseas. There is a shortage of drivers to do that. Largely that’s because … the turnover rates are too high.”

Despite the challenges, Rogers believes the supply crisis offers the manufacturing and shipping sectors a chance to improve in ways they have been desperately needing.

This is the first in a three-part series examining supply-chain issues. Read part 2: Phoenix restaurants struggle to find food and workers while keeping prices low