Pedestrians line up to cross the U.S. border checkpoint in Calexico, California, in this file photo. The Build Back Better plan includes $100 billion for immigration reform, including expanded access to visas and DACA-like protection for up to 7 million undocumented immigrants in the U.S., but not the pathway to citizenship advocates had pushed for. (Photo by Josh Denmark/Customs and Border Protection)

WASHINGTON – Buried in the $1.9 trillion Build Back Better Plan is $100 billion for immigration reform, money that critics say has no business being in the bill and that migration advocates say does not go nearly far enough.

The immigration provisions, which were included in the bill House approved Nov. 19 on a mostly party-line vote, are certain to become a sticking point if and when the Senate takes up the full Build Back Better bill, one of the Biden administration’s key initiatives.

The money would be used for everything from expedited processing of immigration paperwork, expansion of visa availability and access to work permits for as many as 7 million undocumented immigrants currently in the U.S., among other provisions.

But it does not include a pathway to citizenship for those immigrants, which advocates see as a slap that does not address the larger issue – the need for comprehensive immigration reform.

“The Build Back Better Plan, the one that passed in the House, it’s not a path to citizenship, and it just feels like a temporary bandage,” said Vicki Gaubeca, policy and communication strategist for the Southern Border Communities Coalition.

“So it’s a short-term fix, but really, I think, ideally, we need to get immigration reform with a pathway to citizenship for all 11 million people who are here without work authorization,” Gaubeca said.

That was echoed by Jose Patiño, the director of education and external affairs at Aliento, an Arizona-based immigrant advocacy group.

“It’s been since 1986, over 35 years since we had an immigration reform,” Patiño said, referring to the Immigration Reform and Control Act of 1986. That bill, signed into law by President Ronald Reagan, led to citizenship for more than 2 million undocumented immigrants who were in the country at the time.

But Ira Mehlman, media director for the Federation for American Immigration Reform, said the U.S. has no ethical obligation of “rewarding” people who have broken the law by coming here illegally.

“Nobody promised people who came into the country illegally that they were going to get some kind of benefit, you know, including a path toward citizenship,” Mehlman said.

The bill currently before the Senate does not provide a path to citizenship, but it “provides a path to at least a provisional status, which is parole for, you know, for undocumented immigrants who arrive prior to January 1, 2011,” said Donald Kerwin of the Center for Migration Studies of New York.

In addition to being here since 2010, immigrants who want to apply for protection under the bill would be charged a fee for the application and would have to meet other criteria. Kerwin said it is similar to the Deferred Action for Childhood Arrivals program, or DACA, under which work permits and other benefits are provided along with temporary protection from deportation.

But DACA provides just two years of protection, which can be renewed for two years at a time, for undocumented migrants who can prove they were brought to the U.S. illegally as children. Under the Build Back Better plan, however, the deportation deferral would be good for five years at a time, and renewable.

Mehlman does not just disagree with the proposal, he disagrees with the way Democrats are trying to get it through the Senate. 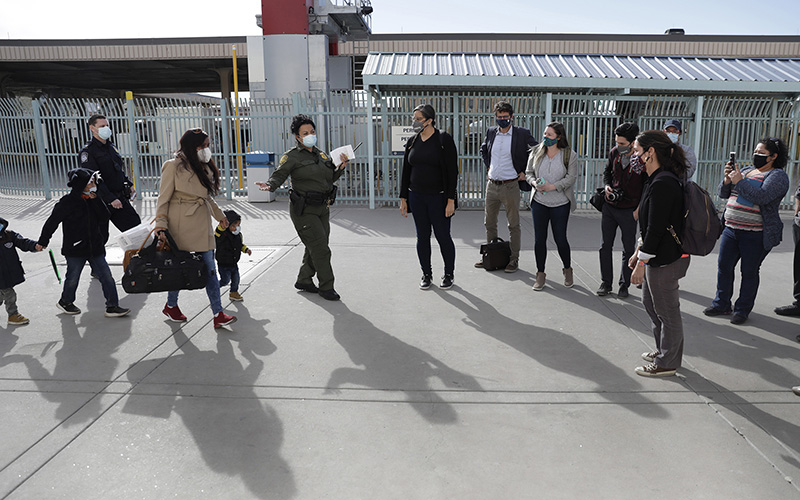 'Remain in Mexico' migrant policy resumes, even as feds vow to end ti

With the Senate evenly divided between Democrats and Republicans, critics of the bill can easily block a measure by filibustering it, since it takes 60 votes to end a filibuster and bring a measure up for a vote. One way around that is through “budget reconciliation” measures, which need only a simple 51-vote majority.

Mehlman noted that the Senate parliamentarian has already rejected an attempt to include immigration language in an early reconciliation bill, and said that should happen again, since he does not believe the migration policy proposal “really constitutes an investment.”

“She’s going to have to rule again, that these are social policies that really don’t belong in a budget reconciliation bill,” Mehlman said of the parliamentarian.

“You can dress it up any way you want, call it an investment. It is not, it is a major policy change,” he said. “So, you know, it probably is not going to make it into the final version of the Senate bill.”

Gaubeca said that not only should it be included but she hopes that senators take it a step further and include a path to citizenship, even though she concedes that she is being “a little bit super-idealistic.”

“That would be awesome … to offer a pathway to citizenship, even though they will have to send it back to the House,” she said.

Patiño said undocumented immigrants deserve a path toward citizenship, noting their contributions to the U.S. by serving as front-line workers in dangerous circumstances during COVID-19 pandemic.

“They were the ones who are out there risking their lives with no vaccines, no access to unemployment, a very little gear, and making sure that we have food on the table,” he said.