PHOENIX – All streaks must come to an end eventually, and one will tonight when the Suns take the NBA’s longest winning streak – 16 straight – into the Footprint Center against the Golden State Warriors, the team with the league’s best record and a seven-game streak of their own.

The way the Suns look at it, the streak is secondary. In their eyes, there are no off-nights or take-it-easy games. Every game matters, and every game is a must-win game. Streak or no streak.

“We joke about it,” Suns reserve center JaVale McGee said after Monday’s practice. “We really don’t care about the winning streak. We just want to win.

“We don’t go in there every game like ‘Oh, we gotta keep the streak up.’ (When) we go in the game, we got to win. We got to put our foot on everybody’s necks that come into our house and when we go in (their) house.”

It hasn’t mattered much which house the Suns have been in this season, but the same has been true of the resurgent Warriors. Golden State is atop the league with an 18-2 record, while the Phoenix streak has pulled the Suns within a game of the Warriors at 17-3, the second-best mark in the NBA.

If the NBA adage that it takes 20 games in a season for teams to form their identity, then the record shows that the Suns and Warriors are likely to battle it out for the Western Conference lead and the NBA’s best record all season long. No other team in either conference had more than 14 wins entering Tuesday’s games. 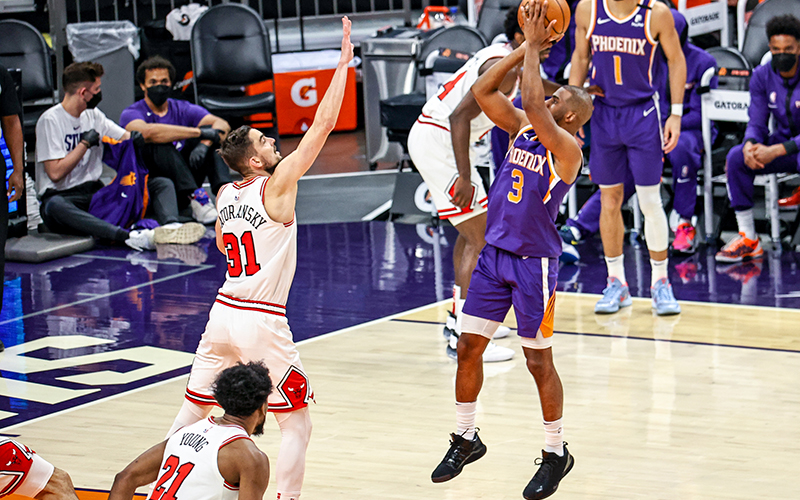 The Phoenix Suns, with the help of Chris Paul, ranks No. 1 in the NBA in field goal percentage at 48.1. The team they play tonight, the Golden State Warriors, are right behind them at 47.9. (File photo by Alina Nelson/Cronkite News)

Heading into the season, both the Suns, as defending Western Conference champions, and the Warriors, who have championship pedigree but foundered the last two seasons, were perceived as talented teams likely headed to the playoffs. However, there were reasons to doubt whether they could emerge from the West.

In less than a quarter of the regular season, both teams have silenced most of those doubts and now there is only one question to be asked – which is now the favorite to win the West?

Tonight’s game will not answer that question. But with two more matchups in the month of December between the Suns and Warriors – on Dec. 3 and Christmas Day – the team with the inside track could be identified before the New Year. The Warriors might have sharpshooter Klay Thompson back by Christmas, adding to their firepower.

Throughout their streak, the Suns have committed to the idea of taking one game at a time and not letting outside noise affect them, good or bad.

Early in the season, the noise was mostly bad. The Suns stumbled out of the gate by losing three of their first four games. They haven’t lost since, and the streak has coincided with an on-going NBA investigation into owner Robert Sarver and the team’s front office in the wake of an ESPN.com story detailing accusations of racism, misogyny and a toxic workplace within the organization.

If it has been a distraction, the Suns haven’t shown it on the court. And they understand the magnitude of tonight’s game, even as they wonder if anybody else has noticed.

“(Tonight’s) gonna be exciting, I’m excited,” McGee said. “A team going 16 in a row versus the No. 1 team in the league, that should be a pretty big headline.

“But I ain’t seen it nowhere.”

McGee said the Suns are fine with that, though.

“We cool with keeping our heads down and being a great team, locking in to what we doing and just keeping it in-house,” he said. “And I feel like the world will see when the time comes.”

The starpower of the Warriors’ core – led by the wizardry of point guard Stephen Curry and the versatility of forward Draymond Green – cannot be ignored.

Suns forward Mikal Bridges, who spearheads the team’s defense, said the Suns will find out just how strong they are defensively against Curry and the Warriors attack.

“We’re going to find out who we truly are right now,” Bridges said. “Obviously it is early but, we’ll see where our defense is at with a team like this.”

Suns All-Star Devin Booker had high praise for the Warriors, even though Golden State has only four players remaining on their roster from their last championship team in 2017-18.

“They’re battle tested. They’re champions,” Booker said. “They’ve done everything that I’m trying to get to.”

Booker said the Warriors are top contenders in the league for many of the same reasons that the Suns are.

“I think they’re one of the few teams, including us, that plays consistently together, all the way through 48 minutes,” Booker said. “And we communicate on the (defensive) end, also. You have two talented teams that know how to play against each other, and now it’s just coming down to competing the full 48 minutes.

“I don’t take any of these opportunities or these matchups for granted. This is primetime basketball. This is what people pay to watch, people pay to see, and I’m excited to be a part of it.”