The Phoenix Suns’ Mikal Bridges dismisses the critics who have questioned his team, despite its success. “If they wanna come on that court and play against us, then … they’d be more than welcome to come step on that court with us,” he said on a recent podcast. (Photo by Lachlan Cunningham/Getty Images)

PHOENIX – The weather is getting colder and the days are getting shorter, but the Suns remain hot and don’t look to be cooling down anytime soon.

Phoenix pushed its winning streak to lucky 13 on Monday night with a 115-111 victory over the San Antonio Spurs. The Suns are now 14-3, only a game behind the Golden State Warriors (15-2) for the best record in the league.

The Suns take their current streak on the road tonight in Cleveland before heading to New York for back-to-back games against the Knicks and the Nets on Friday and Saturday. It’s a tall order to tackle, but the Suns could return home next week with the chance to tie the franchise-record on Tuesday against the Warriors.

While the Suns are proud of their success during this streak, the players are careful to not treat it as something more.

“I really don’t think about nothing, [the streak] is really just a number. Honestly, we went 1-0 today,” said Suns guard Cam Payne, after beating the Spurs.

“On the whole outside of it, yeah it’s 13, but honestly we won the game today. And we’re gonna move on and try to win the next one.”

This has been the foundation of the Suns’ success over the past few years: One day at a time, one game at a time.

The seeds date back to the bubble games at the end of the 2019-2020 season, when the global pandemic forced all NBA teams to live, train and play in the Orlando bubble. Having the worst record of the 13 Western Conference teams that qualified for the bubble, the Suns, at 26-39, faced a monumental task: win all eight games (seven of eight against better opponents) just to have a chance to make the playoffs.

Despite the odds, the Suns were perfect in the bubble, winning all eight of their games. But their 34-39 record was only good enough to tie for 10th place with the Memphis Grizzlies. The Grizzlies held the tie-breaker over Phoenix, having won three of their four matchups, all of which were played prior to the bubble.

What transpired in those four and a half months before the bubble games can only be described as an evolution. After years of mediocrity overshadowing their flashes of brilliance, the Suns’ young core of Devin Booker, Deandre Ayton, Cameron Johnson and Mikal Bridges were now ready to show the world their capabilities.

Only seven players remain from that team, but the additions of Chris Paul and Jae Crowder last year brought veteran leadership and playoff experience the team desperately needed. Pre-season expectations were mixed: Were the bubble games real? Are Booker, Ayton and Bridges capable of taking that next step? Can Paul mesh with a young but talented roster, and fight off Father Time?

Last year’s team emphatically answered all of those questions, posting a remarkable 51-21 record to finish second in the West. Booker earned his second All-Star selection, while Paul found that fabled ‘fountain of youth’ that helped stars like Nash and Grant Hill extend their prime in Phoenix. 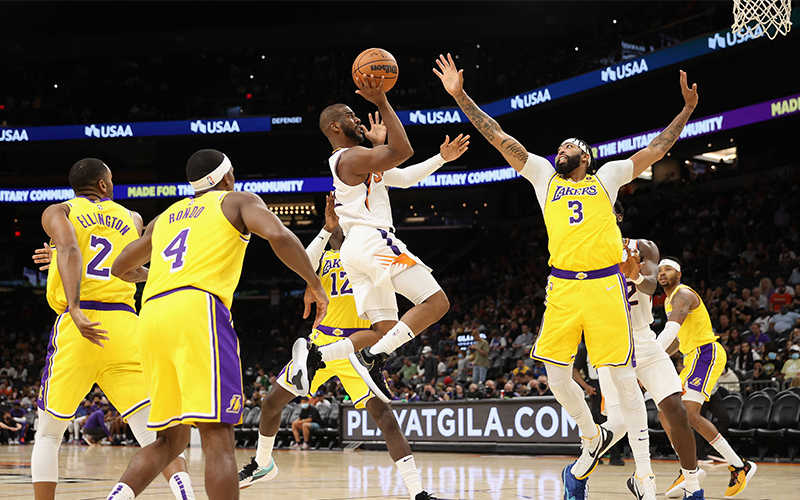 In the playoffs, Ayton showed his growth as the defensive anchor of a team ready to compete for a title. Paul struggled early with a neck injury and missed time due to COVID, but that did little to slow down the Suns as they climbed their way past the Lakers, the Nuggets and the Clippers to make their first NBA Finals since 1993.

But in the Finals, the raw power of Milwaukee Bucks star forward Giannis Antetokounmpo was too much for the Suns, and they lost the series in six games.

It is impossible to deny the good fortune the Suns’ constantly stumbled upon. The Lakers’ stars, LeBron James and Anthony Davis, were both hobbled in the playoffs, eventually forcing Davis to miss the final game of the first round series. The Nuggets lost their star point guard, Jamaal Murray, to a torn ACL shortly after the All-Star break, and were also missing forward Will Barton in the playoffs. The Clippers lost their All-Star forward, Kawhi Leonard, also to a torn ACL, in the Western Conference semifinals, and were also without their defensive anchor, Serge Ibaka.

A similar narrative has risen over the course of the Suns’ current winning streak. They have only played six games against teams from last year’s playoffs, two of which were against a Dallas Mavericks team missing its All-Star guard, Luka Doncic, and one game against a Nuggets team without Murray, Michael Porter Jr. and the reigning MVP, Nikola Jokic.

The lack of marquee wins in this streak is viewed by some as just a continuation of the Suns’ luck from last year. Former NBA sharpshooter JJ Redick relayed this sentiment to Bridges on a recent episode of Redick’s podcast. Bridges, a Suns forward, didn’t spare his thoughts.

“If ESPN, Fox Sports, NBA TV, if them motherf—— are – are they the ones lacing up?” Bridges asked. “Are they playing against us? Then I don’t give a damn what they think.”

Turning a young core with potential into an experienced and confident championship contender can be the most difficult process in sports. The process can be slow and can break up the locker room completely. But the Suns’ core has navigated this evolution with remarkable success in the last two years.

So while fans celebrate the winning streak, and while critics continue to doubt the players even as they pile up the victories, the Suns are busy looking at the bigger picture.

“I’m glad we have a swag and a mentality. We’re just winning games, working on us. Not just tryna beat teams, but we’re working on something way bigger than the league is thinking.”