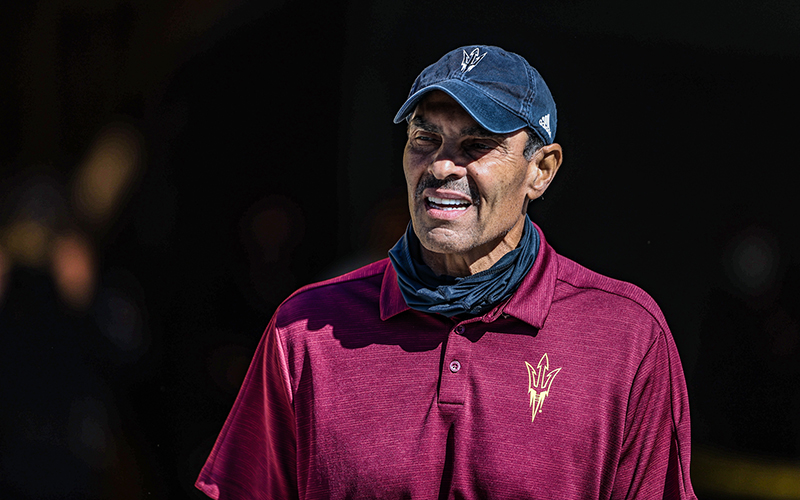 Arizona State football coach Herm Edwards, seen here during a game against Washington State earlier this season, announced after the Sun Devils beat Arizona in their Territorial Cup showdown that he will return next season. Despite an 8-4 record and a third bowl game in Edwards’ four seasons, an NCAA inquiry and mid-season slump had placed his future in question. (Photo by Riley Trujillo/Cronkite News)

TEMPE – Sun Devil football fans had a couple of things to be thankful for this week.

First, the Territorial Cup is staying in Tempe for another year after Arizona State beat Arizona, 38-15, their fifth straight victory against their rivals down south.

ASU finished the regular season 8-4 and awaits a bowl game selection once all of the conference championship games have been played.

And after the game, coach Herm Edwards announced that he will return for next year, his fifth in Tempe.

Not long after the Sun Devils put the ‘Cats in the bag, ASU cornerback Chase Lucas let the other cat out of the bag.

Lucas, who finished his career with a 5-0 record in the rivalry, told media members that ASU Vice President of University Athletics Ray Anderson and ASU President Dr. Michael Crow had just told the Sun Devils that Edwards would be back as coach in 2022.

It apparently wasn’t news to Edwards, who told reporters, “I’m going to be the coach.”

“I had no plans in leaving, so I think that it was nice of Ray(Anderson) and Dr. Crow, obviously, to both be in there and to show the support of what we’re trying to do here,” Edwards said. “That’s always nice when your players react the way they reacted.”

Thanksgiving also coincides with the time of the year when struggling programs part ways with coaches and successful teams hand out contract extensions. Others leave their universities for better opportunities.

Oklahoma coach Lincoln Riley announced Sunday that he would be leaving the Sooners to coach at USC, one of ASU’s Pac-12 Conference rivals.

His arrival at USC is expected to make the Pac-12 South, which includes ASU and Arizona, even more competitive.

There was speculation leading into the Arizona game about Edwards’ future with the school. Despite an 8-4 record and qualifying for a third bowl in his four seasons, an NCAA inquiry into recruiting violations and a swoon following a 5-1 start had placed his future in question.

Three assistants were placed on leave amid the NCAA’s investigation into reported recruiting violations that center on accusations that recruits illegally visited the school during a COVID-19 dead period.

And it didn’t help Edwards’ cause when ASU underperformed in the season’s second half, beginning with a collapse in Utah when the Sun Devils blew a big lead after they were poised to take control of the Pac-12 South.

When Anderson fired Edwards’ predecessor, Todd Graham, he laid out a blueprint for success that he expected in the ASU program..

“Competitive consistency, in my view, is comprised of recruiting, developing players that you do recruit … developing and retaining your assistant coaches, and then in-game preparation and in-game management,” Anderson said on a radio show in 2017 when asked about his decision to dismiss Graham.

“At the end of the day, we’re still average, middle of the pack, and going to a low bowl game,” he said. “We don’t want to be ordinary; we want to be extraordinary.”

Edwards is 25-17, after four seasons with the team – which includes an abbreviated 2-2 season in 2020 due to the pandemic – and will coach the Sun Devils in a bowl for the third time. He is 1-1 in the team’s previous two bowls.

The Sun Devils finished this season ranked second in the Pac-12 South, but costly mistakes like penalties and untimely turnovers plagued their season. They were one of the most penalized teams in college football, ranked 126 out of 130 teams in penalties per game.

ASU’s season took a turn with back-to-back losses to Utah and Washington State. The team’s only victory against a team with a winning record came October 2, a convincing 42-23 victory against UCLA. The Sun Devils beat Stanford six days later to improve to 5-1 and had a chance to put a stranglehold on the South Division when they led Utah 21-7 at halftime.

Instead, they surrendered 28 unanswered points in the second half in a 35-21 loss to the Utes, then followed that with a lackluster performance at Sun Devil Stadium in a 34-21 loss to Washington State.