PHOENIX – For years, a culture of silence allowed systemic abusive behavior, harassment and racism to fester within the National Women’s Soccer League.

Now, the league’s current players – along with former standouts like University of Arizona soccer coach Becca Moros – are using their voices to bring the harmful behavior to light.

“What’s bred that culture of silence is that fear and that you can either shut up or lose your whole career,” Moros said. “The only power you have is to walk away.”

Last year, Dell Loy Hansen, the owner of the Utah Royals FC, was forced to sell his soccer holdings after it emerged he had engaged in racist behavior and front office sexism. The Washington Spirit have faced numerous issues this year. In August, an assistant left the club after making inappropriate comments to players at a party. In September, Spirit coach Richie Burke was terminated for cause by the NWSL following an investigation into his verbal and emotional abuse of players.

Then, there’s the case of Paul Riley, the North Carolina Courage coach who made headlines in September when former players accused him of sexual coercion and misconduct. He was subsequently fired. 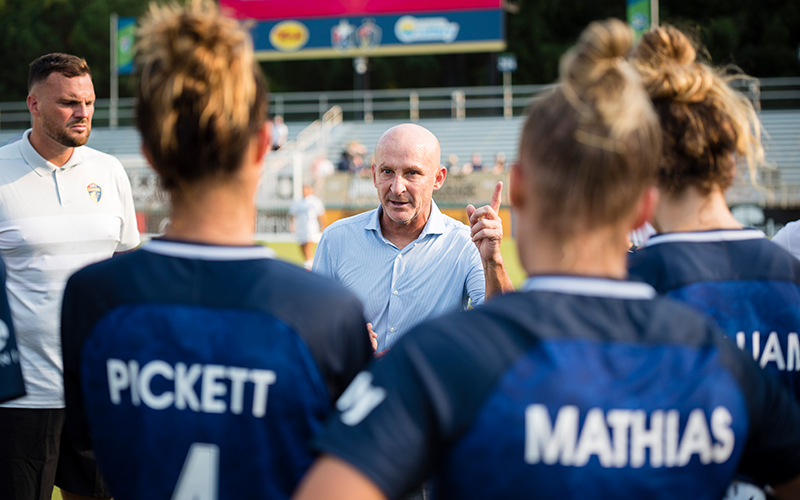 North Carolina Courage coach Paul Riley made headlines in September when former players accused him of sexual coercion and misconduct. He was subsequently fired. (Photo by Lewis Gettier/ISI Photos/Getty Images)

NWSL athletes are using their voices to bring an end to systemic abusive behavior, harassment and racism that has long been prevalent in the “old boys club” that makes up professional soccer.

This is a stark difference compared to how players used to respond to misconduct.

In fact, they mostly used to not respond at all, given the wall of silence that often still exists within the NWSL.

For decades, players were expected to keep the secrets of what went on behind closed doors within the league and individual clubs. Because two previous attempts at professional women’s soccer in the U.S. folded (the Women’s United Soccer Association and Women’s Professional Soccer), league and team executives had tremendous leverage when it came to keeping players silent.

“There definitely has been this shared idea that because two leagues have folded in the past, the NWSL is kind of the last hope for a women’s soccer league,” U.S. national team forward Alex Morgan told Meg Linehan of The Athletic. “Because of that, I feel like there’s this idea that we should be grateful for what we have and we shouldn’t raise important questions — or ask questions at all.”

No one knows this better than Moros, the Wildcats coach who as a professional player witnessed behavior that was borderline illegal.

Moros played for a few teams in both the WPS and NWSL, including the magicJack of the WPS and the Portland Thorns in the NWSL – teams notably embroiled in controversy.

She described the WPS as “a mess.” The magicJack, a team that originally began as the Washington Freedom before rebranding and moving to Florida, were no different. The magicJack ownership group was “by far the most abusive thing I witnessed,” said Moros, who spent half the 2011 season with the club. She said she was one of the lucky ones who got out.

“MagicJack was run like a mafia,” said Moros, adding that Dan Borislow, the owner, “controlled everything.”

“Everyone who worked for him, he owned their housing. If they crossed him, they would be on the street in a day. (The team) didn’t have a proper doctor. It was just a really abusive environment,” Moros said. “We all lived in this nice apartment building, but the guys who ran the security cameras were always warning me that we were being watched. It was just a creepy place.

“There were some people internally on the team or somewhere who were informing the ownership of every twist and turn the players were doing so that they somehow knew where people were at all times.”

Borislow was known for his penchant for expensive dinners. He’d shut down upscale restaurants and bring players straight from training to join him. “We’re the only people in there, eating escargot and having $300 bottles of wine,” Moros said.

“It was a different, weird world,” she said. “Nobody really was prepared for it. None of us had ever experienced or even read about things like that to know what red flags were going up there.”

The cities and teams changed over the years, but the flags kept appearing.

Riley, a player-turned-coach from England who had a long career in the United States, was fired from the North Carolina Courage in September, 2021, after he was accused of sexually coercing and verbally abusing players on his team. He, too, had a history of closing down bars with his players, The Athletic reported.

Riley was Moros’ coach in 2014, the year she was in Portland. There was constant speculation about him being inappropriate, she said, but Moros and most of her teammates didn’t have proof of actual misconduct.

“He put himself in situations with the team where he wanted to be around the team and close to the team in settings that were less than necessary for a coach to be around,” she said.

Moros said she wasn’t surprised or shocked when she heard of the misconduct allegations against Riley. On Oct. 1, the day after The Athletic story was published, the NWSL made the extraordinary decision to cancel that weekend’s games. Commissioner Lisa Baird announced the decision, saying, “This week, and much of this season, has been incredibly traumatic for our players and staff. We have decided not to take the field this weekend to give everyone some space to reflect. Business as usual isn’t our concern right now.”

Later that same day, Baird resigned as commissioner, after evidence revealed she failed to respond to player requests to further investigate Riley during his various coaching stints that spanned his tenure with multiple teams.

“It was a bigger shock to find out that it had been reported and investigated and not rooted out sooner,” Moros said. “I think that was probably a bigger shock for the community was that people had been made aware of it and had swept it under the rug, and he’d been allowed to continue coaching and potentially doing similar things with other people when (the Portland Thorns) had the information to know what was going on and could have been stopped sooner.”

The circle of silence is insidious, a culture perpetrated by the clubs and ownership for years. Instead of reporting findings of an investigation and taking necessary action – as has been the case in some other professional sports leagues — the Thorns chose to simply not renew Riley’s contract, allowing him to continue coaching professional soccer elsewhere.

It’s similar to the concept of institutional betrayal, “where the institution continues to betray that victim through not addressing the situation well, or by continuing to allow that abuser to thrive, or to hide within that institution,” said Grace French, the president of Army of Survivors, an organization that supports survivors of sexual violence.

Moros agreed with Morgan’s assessment of the culture of soccer, saying she would argue the same thing.

“The league has been built on the backs of the domestic players, the non-national team, non-international players, the players who have had very little rights, and whose contracts haven’t been protected,” Moros said, “You could just get cut at any moment. You can be traded at any moment. There’s no accountability or responsibility from the clubs to provide proper environments.”

Not being protected means players have no voice, no power to push back against coaches or ownership.

The NWSL Players Association sent the league a letter on Oct. 6 asking for numerous changes, including cooperation with the union’s independent investigation into sexual misconduct and abuse, transparency with any investigation already conducted by the NWSL – including sharing the findings of the league’s investigation into Riley, and inclusion of the union in the search for a new NWSL commissioner. The league agreed to these demands on Oct. 29.

After the league’s announcement, Tori Huster, the Players Association president and Washington Spirit midfielder, said, “Each of these demands is seen by the players as one step closer to the goal of taking our league back.”

But on Monday, just 48 hours after leading the Chicago Red Stars to the NWSL Championship, coach Rory Dames resigned amid allegations of verbal and emotional abuse and crossing boundaries with players.

Sometimes it seems like the culture of the NWSL may be truly changing. But, perhaps, it’s still too early to tell.