The Supreme Court is set to hear arguments Dec. 1 in a Mississippi abortion law case that could be a vehicle for overturning Roe v. Wade. Scores of briefs have been filed on both sides of the case, including one from more than 500 women athletes – at least nine of them with Arizona ties – arguing in support of abortion rights. (File photo by Vandana Ravikumar/Cronkite News)

WASHINGTON – Nine Arizonans are among the more than 500 female athletes who signed on to a brief to the Supreme Court this week challenging Mississippi’s restrictive new abortion law.

The Phoenix Mercury’s Brittney Griner and Diana Taurasi joined seven University of Arizona swimming alumnae and hundreds of other club, collegiate and pro athletes who said overturning Roe v. Wade, which the Mississippi case could lead to, would “violate their most fundamental liberties.”

Christine “Crissy” Perham, an Olympic gold medalist and two-time national champion for the Wildcats in the 100-yard butterfly, said in the brief that she “accidentally became pregnant” while on birth control during her sophomore year in Tucson. She said she could “count on one hand how many people I’ve told about my abortion. Until now.”

“I’m finally speaking up and sharing my story because there shouldn’t be a stigma surrounding personal healthcare decisions,” she said in the friend-of-the-court brief.

One expert called the filing just the latest instance of growing activism by athletes.

“This is another example, like Black Lives Matter from last summer and the U.S. women’s national soccer team’s fair-pay argument, that shows national activism like the Olympics in 1968 and Colin Kaepernick are now so public and spreading,” said Steve Ross, a professor of law at Penn State University.

The athletes’ brief is one of scores filed on both sides of the case, Dobbs v. Jackson Women’s Health Organization, which challenges a Mississippi law that prohibits abortions after 15 weeks of pregnancy. The law would allow abortions after that in cases of “severe fetal abnormality” or a medical emergency for the woman, but there are no exceptions for rape or incest.

The law was overturned by lower courts, which cited the Supreme Court’s 1972 Roe v. Wade decision that recognized a woman’s right to an abortion and subsequent rulings that protected that right before a fetus was viable outside the womb.

Mississippi and its supporters argue that it’s time for the high court to overturn those rulings.

Among the 81 briefs filed in support of Mississippi’s position is one from 24 states, including Arizona Attorney General Mark Brnovich, who argue that the case gives the court “an opportunity to remedy those problems by reconsidering and overruling” Roe and later cases that were “unlawful from the day each was decided.”

CORRECTION: An earlier version of this story misstated the year of Crissy Perham’s accidental pregnancy in the third graf. She was a sophomore. The story has been corrected, but clients who used a previous version are asked to run the correction found here.

More than 60 briefs had been filed as of this week opposing Mississippi, including the athletes’ brief. Perham who, through a spokesperson declined a request for comment, tweeted Monday that she is “proud to be one of 500 athletes asking the Supreme Court” to protect abortion rights, adding “#BansOffOurBodies.”

She was one of seven former UArizona swimmers on the brief, along with Amy Botha, Heather Branstetter, Erin Brewer, Laurie Grafmiller, Dianna Metzger and Karen Smith.

Perham is also one of a few Olympians quoted in the brief, including Megan Rapinoe of the women’s national soccer team and Ashleigh Johnson, a two-time U.S. water polo gold medalist, and the program’s first Black player. Players’ associations for the WNBA and the National Women’s Soccer League also joined the brief.

The presence of hundreds of voices in a public display of support is “intrinsically important” to the cause, said Michelle Sikes, a Penn State professor who studies sports. “Knowing that there is a solidarity makes this stand more special,” she said.

“This is a vertical alliance-forging across age, across generations and across levels of competition,” Sikes said. “The benefit of the visibility is … increasing the attention of the public on a fundamental issue to all women, and … maintaining that protection for women.”

Shania Goodman of the National Partnership for Women & Families said having support from public figures like athletes “demonstrates just how broad the base of support for abortion access really is and adds such a valuable voice to our collective advocacy.” 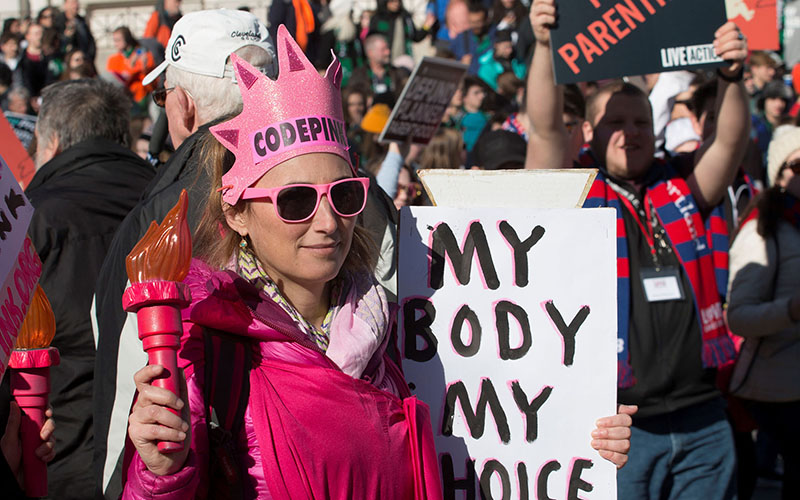 The annual March for Life has drawn thousands, including abortion-right protesters, since 1972’s Roe v. Wade. But abortion opponents hope to finally reverse that ruling this fall with a ruling on Mississippi’s abortion law. (File photo by Philip Athey/Cronkite News)

“Athletes, and especially Black women athletes, have been at the forefront of so many important issues, especially recently – from racial justice to mental health to equal pay to maternal health,” she said.

Ross said amicus briefs occasionally influence a case, citing cases like the school desegregation ruling in Brown v. Board of Education and the decision allowing college athletes to profit from their name, image and likeness in Alston v. NCAA. Usually, however, briefs like the one filed by the athletes are “typically political speeches.”

“They are more to the benefit of the people explaining themselves,” Ross said.

The presence of WNBA stars like Taurasi and Griner does not necessarily surprise him, because of the league’s “overwhelming support of women’s rights and the women’s cause.”

He said it means more that lower-level athletes from high schools and colleges across all three NCAA divisions signed on. The signatures of 327 amateurs are a signal to those in less-supportive environments. The majority of current and former high school athletes did not include their school on the brief.

Perham said she signed on because her difficult decision to have an abortion “ultimately allowed me to become an Olympian, a college graduate, and a proud mother today.”

“That is what I’m fighting for – for everyone to be afforded the freedom to make their own decisions about their bodies,” she said in the brief.