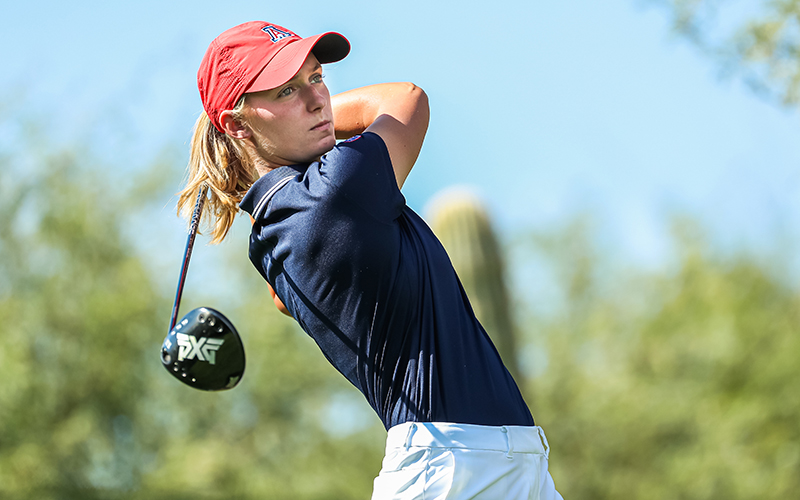 Arizona junior Gile Bite Starkute is the first Lithuanian to play college golf in the United States and has emerged as a standout for the Wildcats. She hopes to be her country’s first Olympic golfer. (Photo courtesy of Mike Christy/Arizona Athletics)

PHOENIX – Tucson, Arizona and Vilnius, Lithuania are separated by nearly 6,000 miles on a world map.

They’re even further apart in the world of golf.

While they’re both cities of about 540,000 people, there are more than 40 golf courses in and around Tucson. Vilnius has more disc golf courses – five – than real golf courses – three – and the entire country has just seven.

Which explains why University of Arizona junior Gile Bite Starkute, while ranked among the nation’s Top 100 players in women’s collegiate golf by Golfweek, is a much more important piece of the Lithuanian golf community than Arizona’s vast golf landscape.

“The community is very much inspired by her, everyone admires her and the smaller kids already look up to her as an example,” said Mindaugas Markevičius, secretary general of the Lithuanian Golf Federation.

Lithuania’s golf community is fairly small because of the country’s late introduction to the sport. The country has yet to have a golfer in the Olympics, and Markevičius said the first golf course in Lithuania, which was a nine-hole, uncertified course, was constructed only 21 years ago. The first 18-hole course wasn’t built until 2005.

“She is probably only one of five women that play competitive golf from Lithuania,” said Arizona golf coach Laura Ianello. “She’s probably the first to ever play college golf from the country of Lithuania.”

Starkute, who began learning the sport as a leisure activity with her father when she was just 6, found the sport just as it was emerging in her home country.

Markevičius said golf in Lithuania started with about 300 registered players but has grown to more than 2,500 today. Despite the growth of the game in Lithuania, Starkute was unaware of the opportunities that were possible in golf until she took her game outside of the country.

“It was not really that big of a thing, but when I started traveling internationally then suddenly my eyes opened on what golf actually is” Starkute said. “Suddenly you come to a tournament and you see 70 or 80 girls your age playing better than you. You realize that there is competition.” 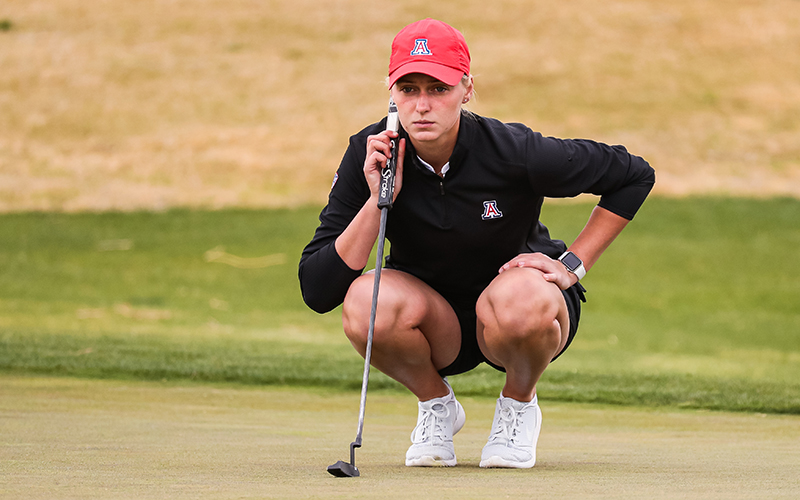 Gile Bite Stakute, who helped Arizona to the national semifinals last season, is a sports star in Lithuania, which has only a handful of golf courses. The UArizona junior has her sights set on becoming her country’s first Olympic golfer. (Photo courtesy of Mike Christy/Arizona Athletics)

After experiencing higher levels of competition and recognizing her own potential, Starkute started to consider taking her career even further and try to become the first Lithuanian to play college golf in the U.S.

“When I was in high school, I didn’t really know if I wanted to continue both (golf and education) after graduating,” Starkute said. “After talking to a lot of people who have been to the United States, and my family, we saw it as a great opportunity to kind of start my future.”

Gile began sending letters to collegiate coaches around the U.S. to express interest in playing for them. She received a response from several schools, but Arizona was not one of them.

But Arizona found her, thanks to some good fortune.

Ianello discovered Starkute while visiting a tournament in Ireland, something that wasn’t out of the ordinary in her recruiting process. She often visited international tournaments in search of golfers with the potential to play for her team.

“I stumbled upon Gile’s group, and I had seen what she shot – a very good round in the first round,” Ianello said. “So I went to watch her in the second round. I was very impressed with her; her maturity, her strength.”

Starkute and her parents also saw potential in the Arizona program and after a conversation with Ianello, she arranged an official visit to the Tucson campus. The visit only enhanced Starkute’s desire to continue her golf career in the desert.

“I just fell in love with Arizona after coming here,” she said. “A day later I was like, ‘I want to go here.’ I think it was how professionally I saw it is, just the facilities and the resources that were introduced to me during my official visit.”

Her passion for the game has only grown since she joined the Wildcats.

Ianello described Starkute as a huge contributor to the success UArizona had in the NCAA Division I Golf Championships last spring season, when the Wildcats reached the national semifinals before falling to eventual champion Mississippi.

Starkute finished ninth in the Pac-12 Preview tournament the first weekend of November in Hawaii and will compete next when the Wildcats tee it up for the first event of their spring semester at the Superstition Challenge January 24-25 at Superstition Mountain Golf Club in Gold Canyon.

“She has been consistently in our top five for the last year and a half,” Ianello said, “Gile’s just a young woman who will strive to do everything perfectly.”

The Lithuanian Golf Federation has even higher hopes for Starkute, who they believe can be the country’s first Olympic golfer. She shares the same high hopes, but Starkute is taking aim at goals beyond the golf course as well.

“My dream is also to try to represent my country in the Olympics, because we have never had a golfer play for our country,” she said. “So that would be the absolute dream. But I’m a finance major at the moment, so pursuing a career in finance is also somewhere in the plan. So I feel like finding the balance.”

Starkute described herself as someone unwilling to settle into complacency, or be easily satisfied. She hopes to master all aspects of her life without sacrificing her potential in any of them.

“I never want to reach the one ultimate goal,” Starkute said. “And I want to have little goals throughout the way. So I want to see it as a learning process that never ends.”

Meanwhile, she is setting a standard for the Lithuanian Golf Federation and laying the path for future young golfers from her country.

“Golf should be one of the ways for players not only to get free high quality education,” Markevičius said. “We see the NCAA as a highway to professional golf.”

Markevičius described Starkute as a pride and joy of Lithuanian golf – a star. The federation wants her to represent the country but also achieve as much as she can beyond the sport, and she has a similar mindset.

Starkute sees her journey across the globe to the United States as just the beginning. Now that she’s here, she intends to use the opportunities to her full advantage.

“I want to stay here in the U.S., try to do as many things as I can, maybe even settle here,” she said. “And if things don’t work out completely, then home is always there.

“Getting here to Tucson, it’s like opening doors to all the possibilities. I got really lucky ending up here.”