Even though her mom, Lynne, played on the Arizona State women’s golf team that won a national championship in 1990, Calynne Rosholt said she doesn’t feel the pressure of having to match her mom’s success. (Photo courtesy USGA/J.D. Cuban)

TEMPE – Calynne Rosholt doesn’t feel the pressure that comes with carrying the family torch. The Arizona State freshman only got caught up in it when she saw a picture of her mother, Lynne, at the Carson Student-Athlete Center.

Rosholt comes from a rich ASU golf pedigree as her mother, Lynne, helped the program to its first NCAA championship in 1990 alongside current coach Missy Farr-Kaye. The bond between the two has carried over into the next generation as Farr-Kaye is counting on the freshman she has known since birth, seeing similarities between the past and the present.

“Lynn was quite a competitor,” Farr-Kaye said. “She worked hard and just wanted to compete and so (Calynne’s) a lot like her mom in that sense.”

Calynne will have the opportunity to showcase her skills Monday and Tuesday when ASU competes in the Nicklaus Cup, a tournament in Columbus, Ohio, named after Barbara Nicklaus, the wife of golfing legend Jack.

Farr-Kaye is impressed with her young golfer’s ability to connect with the team, on and off the golf course.

“She’s a competitor so she’s not going to limit herself and say where she fits on the team. She was very comfortable after the first day,” Farr-Kaye said. “She’s like, whatever, what’s my tee time like you know, no big deal.”

This relaxed mindset isn’t easy for everyone but Rosholt has been training for this for years. Ranked in the world’s top 400 amateurs, Rosholt is used to being in the spotlight and treats every situation the same: one hole at a time.

“It’s just a golf course, nothing different, I just got to play my game,” Rosholt said.

That competitive nature and relaxed attitude has translated to early success as Rosholt led the pack for the Sun Devils, producing a 1-under-par performance at the recent Annika Intercollegiate, signaling a bright future ahead.

“Calynne played very well,” Farr-Kaye said, “not just for her first tournament but for a tough golf course she’s never seen before.”

Farr-Kaye does feel a bit of responsibility with her young prospect, however, as the coach has stayed in regular contact with Lynne, her former teammate, over the years.

“Her mom’s like, ‘OK, I’m giving you my baby daughter you know’ and I’m like, ‘She’ll be fine and I’m not gonna call you every week and you’re not gonna call me,’” Farr-Kaye said, smiling. “They just want their daughter to be happy, to play well, and to have fun so I’m doing my best to keep that atmosphere here.”

And while there is plenty of family history, it was the family-like feel of the program that drove Rosholt to her mother’s alma mater. Raised in Texas, Rosholt spent her last two years of high school competing for Cactus Shadows in Scottsdale. She had a near-perfect ending to her prep career, finishing in the 2020 AIA Division II State Championship by eight strokes, while the Cactus Shadows team took second overall. Rosholt was named to the All-Arizona High School Golf First Team and was a finalist for the state’s female Golfer of the Year, an award that went to current Sun Devils golfer Ashley Menne.

“I just felt this family community feeling when I was here, it just felt almost like home,” Rosholt said of Arizona State. “I felt secure because I’ve heard coaches leave before students even get to college, and I felt good about her staying.”

The younger players frequently seek guidance from the veterans, including senior Alexandra Forsterling, on and off the golf course.

“They definitely have a lot of knowledge (of) like Matchplay and stuff because they’re from Europe and they play a lot of team events that require this kind of thing, and in the states we don’t really get to do that as often,” said Menne, a sophomore. “They’ve been great this year, really leading the team well so I’m looking forward to just spending more time with them before they go.” 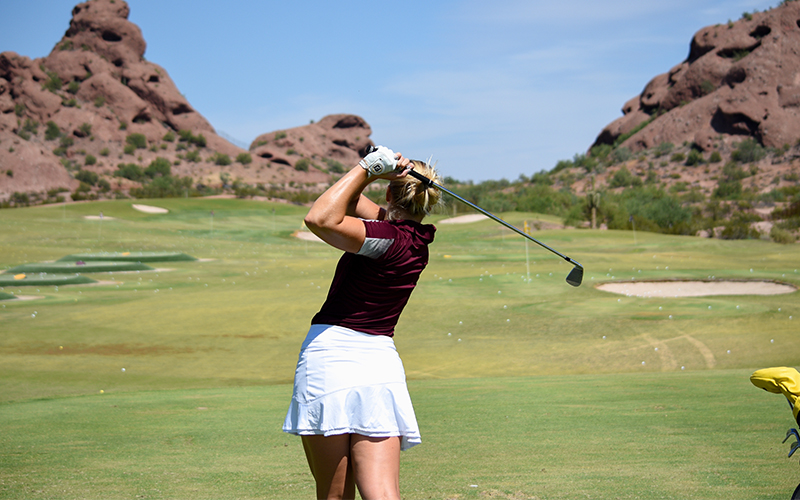 Amanda Linner is among the players on a talented ASU women’s golf team. (Photo by Mary Grace Grabill/Cronkite News)

That togetherness is key for Menne as she didn’t have the greatest start to the preseason, finishing 7-over at Annika. Menne finished with a 70 on the third day, and hopes to improve her putting at the Nicklaus Cup.

“I struggled a lot with putting during Annika, not my usual self missing short putts that I usually always make, and I’ve just been working on my putting a lot,” Menne said.

This tournament is the first time this season the men’s and women’s golf teams have had a chance to play alongside one another.

“We’re definitely looking forward to the Nicklaus Cup. I mean we get the chance to play with the guys which we never ever do,” Menne said.

“We were really close with them, but just getting to know them a little bit better on the course and like how they function was great. And then I mean the men’s coaches as well. Giving a lot of really good advice on how we should approach this next week. How we need to be like a team of 12 rather than a team of six and six because we need to come together in order to win.”

Farr-Kaye isn’t worried about specific team preparation, citing the absence of former ASU golfer Linn Grant, who turned professional in late July, as one of the key reasons for preseason struggles.

“Without Linn … I think everybody’s just trying to figure out where they fit, what they’re doing, what their goals are,” Farr-Kaye said. “I’m not concerned at all and I’ve told them that. We’ve got a couple more good tournaments, golf courses that suit us well, and I think we’re going to do just fine.”

With every absence comes an opportunity for others to step up, and Rosholt has done just that as her play and the way she carries herself are attributes that Farr-Kaye hopes rubs off on the team next week.

“​​She just really is kind of a go-with-the-flow kind of kid,” Farr-Kaye said. “She didn’t think about it twice and some would be really kind of shaking in their boots going, ‘Oh my gosh, I’m playing with the number one seed.’ And I don’t even think she thinks about it.”