Diana Taurasi’s life story is beginning to read like a Hollywood script. With a new child and another possible WNBA title ring in her immediate future, will she retire after the season? (Photo by Harrison Zhang/Cronkite News)

The Phoenix Mercury have had to fight and claw throughout the WNBA postseason and are now tied at one game apiece with the Chicago Sky in the Finals, setting the stage for Diana Taurasi’s illustrious basketball career to perhaps reach a thrilling end.

No matter how the Finals conclude, Taurasi, a generational talent, hasn’t given much insight into her future plans. But eight months shy of 40, and hobbled throughout this postseason run, the question arises: Would Taurasi consider retiring if she won her fourth championship?

Few doubt Taurasi’s resolve to return next season if the Mercury don’t win the title this year. But two more victories against the Sky, starting tonight with Game 3 in Chicago, would undoubtedly be the exclamation point to a year that defined Taurasi’s career. It might seem logical, then, if she were to call it a day and walk away on top.

But people who know her well, her teammates and her former high school coach, see her through a different lens, one where team championships, and not individual accolades, mean everything.

For instance, as if to highlight the news that WNBA fans had voted Taurasi the Greatest of All Time, she starred in the Mercury’s Game 2 overtime victory last Wednesday, notching 18 of her 20 points in the second half and outscoring the Sky in OT by herself, 8-7. 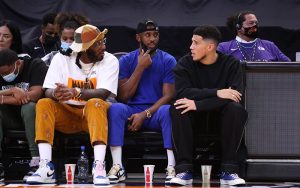 In February, Taurasi signed a new two-year contract, keeping her with the Mercury through 2022. But she struggled with injuries to start the season, before recovering in time to win a record fifth gold medal with Team USA at the 2020 Tokyo Summer Olympics. Coming home with fellow gold medalists Brittney Griner and Skyler Diggins-Smith, the trio energized a 10-game winning streak that catapulted the Mercury into playoff contention.

But once again, Taurasi was hit with an injury, a left ankle sprain that forced her out of the team’s final three games of the regular season.

Taurasi returned for the playoffs, guiding the Mercury through both elimination games against the Liberty and the Storm. Clearly hobbled, Taurasi gutted through a challenging semifinal matchup against the Aces and closed them out in Game 5 with 14 of her 24 points coming in the fourth quarter.

Afterward, in a post-game interview that has gone viral, Taurasi implored her pregnant wife, Penny Taylor, to “Hold it in babe, I’m coming.” Then Taurasi immediately flew home to Phoenix to be with Taylor as she gave birth to their second child (and first daughter).

And now, with the best-of-five Finals heading into tonight’s pivotal Game 3 in Chicago, and with the tantalizing thought of Taurasi winning her fourth WNBA championship with one team, the Mercury, well, storybook endings don’t get much more perfect.

Yes, the Mercury are in the Finals based on the team’s collective effort, with Griner and Diggins-Smith recently named to the All-WNBA’s First Team, while Brianna Turner earned All-Defensive First Team honors.

But it is Taurasi’s energy that defines the Mercury and unlocks their full potential as a championship contender. And as coach Sandy Brondello explained, it’s in those final minutes of a game where Taurasi shows her worth, as she has throughout this playoff run and throughout her career.

“She is just a player that loves those moments. There is no fear, even when she is so tired,” Brondello said.

The magnitude of Taurasi’s talent is not lost on her teammates. Griner carried the scoring load in Game 2 of the Finals to keep the Mercury within striking distance, scoring 29 points on 12-19 from the field. But as she reiterated, Taurasi is the team’s closer, and Griner would not have it any other way. 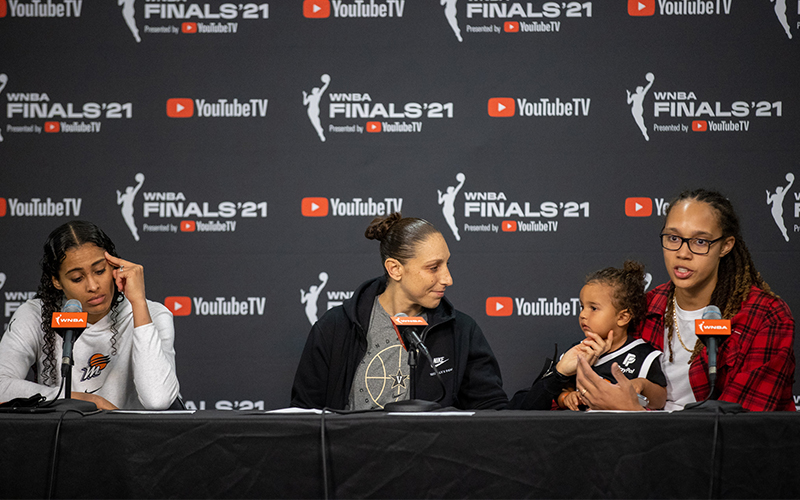 Taurasi has been coy in press conferences about her plans for the future. (Photo by James Franks/Cronkite News)

“That’s the GOAT, that’s the GOAT right there, ok?” Griner said. “So we know what ‘D’ can bring. Doesn’t matter what, how she starts the game or whatever.”

“We know when the time is going down, when it’s crunch time, we have all the faith in the world that D’s gonna make those shots, make big plays for us. I mean, she does it year in, year out.”

This clutch gene, that drive to win, was seen early by Taurasi’s high school basketball coach, Larry Webster. Now retired, Webster still marvels over the impact Taurasi had on the Don Antonio Lugo girls’ basketball team in Chino, California, where Taurasi was raised.

“Diana will do anything to win a game,” Webster said, explaining that it was not always about scoring points for Taurasi. She understood early on in her career the importance of empowering her teammates, something Webster noticed when Taurasi’s scoring numbers dipped in her senior year of high school.

“They go down only because everyone else on that team got better,” Webster said.

But Taurasi’s competitive edge did not just improve her teammates. As Webster admits, it improved his quality of coaching as well.

“Well, it kept me on my toes,” Webster said. “I thought I was trying to make it fun to play a game, and I tried not to put pressure on it. But she can make it competitive, even in practices she can get very competitive.”

“Even after practices, she’ll be going one-on-one with somebody.”

While this approach could be grating for some, Webster made clear that in Taurasi’s case, her competitive drive came from a good place and that made all the difference.

“When somebody’s really trying their best, you know that is one thing,” Webster said. “But if somebody is not going to give it their all, I think she senses that and she tries to get them to get at their best.”

When prompted to consider the idea of Taurasi ending her career after these Finals, Webster refused to hear the end of the question.

“No,” Webster said emphatically. “No, win or lose, she has another year left on her contract, she’ll fulfill that, I’m sure. That’s how she is.”

And in Webster’s opinion, even that might not be the end of it.

Fellow five-time gold medalist Sue Bird just played in the 2020 Olympics at 42, the same age Taurasi would be at the 2024 Summer Olympics in Paris. Considering this, there is only one question in mind when pondering whether Taurasi would sign another two-year contract after the 2022 WNBA season and aim to win an unprecedented sixth gold medal with Team USA.

That is the attitude Taurasi has taught everyone who has ever watched or played with her throughout her career. To never doubt yourself or your capabilities, to always set lofty goals and attack them with all your heart, to never let anyone put a ceiling on your success.