When the Phoenix Mercury played the New York Liberty in their first playoff game, it was clear by the wording on the court that they were at Grand Canyon University, not Footprint Center. (Photo by James Franks/Cronkite News)

PHOENIX – Home is even sweeter when it takes a while to get there.

After playing every postseason game away from their usual arena, today the Phoenix Mercury are set to play the night end of an unprecedented doubleheader with the Phoenix Suns at Footprint Center. The Mercury, up 2-1 against the Las Vegas Aces in the WNBA’s best-of-five semifinals, can advance to the championship round with a win.

The rare double with the Suns comes after a series of events and circumstances led to debate about the fairness of scheduling in the WNBA and the treatment of the Mercury in particular.

The Mercury played their first playoff game – a single elimination game against the New York Liberty – at the Grand Canyon University arena on Sept. 23 because a concert was previously scheduled for the same night at Footprint, the team’s downtown home. Over a week later, the Mercury hosted Game 2 of the semifinals against the Aces at Desert Financial Arena in Tempe because Footprint had booked a conflicting Disney on Ice event.

Mercury president Vince Kozar knows the optics are bad but was clear that the scheduling mishaps and venue changes were not intended to shortchange the team.

“The WNBA playoffs create a very unique challenge for scheduling in that the first two rounds are single elimination,” Kozar said. “When you’re looking to schedule something like a playoff game, you’re not talking about simply choosing one event over another, you’re weighing the risk of choosing no event over another.

“If you combine that challenge with how late in the calendar we’re able to get those (playoff) dates, (and) how far in advance concerts, events and family shows are scheduled, which in a normal year is 15 to 18 months, and in a COVID year, we’re talking about rescheduling events that have been scheduled for two years or more. It just created a perfect firestorm where what would have been our first two playoff games had conflicts at our arena.”

The Mercury weren’t able to move any playoff dates because the WNBA playoffs are nationally televised on ESPN. National television time slots are immovable, as ESPN has other programming to take into account.

“If you try to shift one live program, then you’re impacting other live programs. It’s just not realistic,” Kozar said. “It’s kind of like throwing darts at a dartboard trying to figure out exactly what dates to schedule. We’re really just trying to save windows.”

The idea of reserving windows of playoff dates is a guessing game at best. For example, if the Mercury beat the Seattle Storm on Sept. 17, the team would have clinched a first-round bye and wouldn’t have played its first playoff game until Sept. 26.

There was no scheduling conflict at Footprint that day.

Kozar said the Mercury’s postseason situation isn’t ideal and it has presented numerous challenges, but the organization is prepared to move forward and discuss changes to make after the season.

“I think going forward, we’ll probably look to avoid giving up a week-long span of dates (for events like Disney on Ice). That could certainly help,” he said. “We’re also going to continue to look at the potential around getting dates as early as we possibly can, saving a range of dates. Not dealing with the challenges of rescheduling concerts due to COVID will certainly help as well.

“And then look, maybe there needs to be discussion about the playoff format itself. We’ve been in this league for 25 seasons, we’ve made the playoffs dozens of times, and we never had to move a game until the playoff format shifted. We certainly can’t promise that it will never, ever happen again. But we can be very intentional about trying to avoid it going forward.”

‘It means the world to us’

The WNBA changed the playoff format before the 2016 season. The team didn’t face scheduling issues the first season, but did in the following two playoff runs.

In 2017 and 2018, the Mercury hosted first-round games at ASU’s arena, then known as Wells Fargo Arena, due to concerts scheduled at the team’s downtown home. The Mercury lost on the road in 2019 and played on a neutral site in the bubble in 2020, so this postseason is the first in three seasons where scheduling conflicts arose and stirred up debate among WNBA fans. 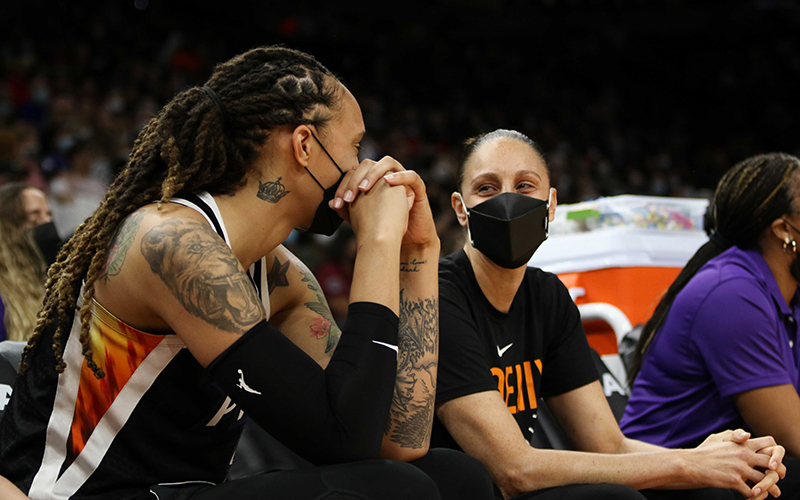 Brittney Griner (left) and Diana Taurasi can help the Mercury advance to the WNBA Finals with a victory over the Las Vegas Aces. (Photo by Harrison Zhang/Cronkite News)

Wednesday will be a full day at Footprint Center, with the Suns’ preseason matchup against the Los Angeles Lakers tipping off at 3 pm MST. Four hours later, the Mercury face the Aces in Game 4, with a chance to punch a ticket to the Finals.

This setup is what Kozar called a “very unique, very unprecedented doubleheader.”

Brianna Turner, the Mercury forward who became the third player in franchise history to put up at least 20 points and 15 rebounds in a playoff game Sunday, said the Mercury should be playing the later game on Wednesday.

The organizations, which are both owned by Robert Sarver, always had the intention of playing a doubleheader if the Mercury’s playoff games lined up with a Suns’ preseason game, Kozar said.

“To be honest with you, this has always been the intention. A couple of years past, the Mercury just didn’t win enough games in those seasons to make it come to life,” Kozar said. “It took a lot of people coming to the table and making sacrifices and making this compromise. But what was really heartening about it is that everybody wanted to get us to the place that we got to. Everybody wanted to make sure that if the Mercury were playing a semifinal game at home, that we were playing on our own home floor in our own home arena.”

Mercury star guard Diana Taurasi said Tuesday that it means a lot to the team to have the Suns’ game moved up.

“It’s all about caring, right? You can talk about money and business, but when someone cares about something, they’re willing to do something that turns the tide,” Taurasi said. “It’s one thing to care and actually take action. It means the world to us. It really does.” 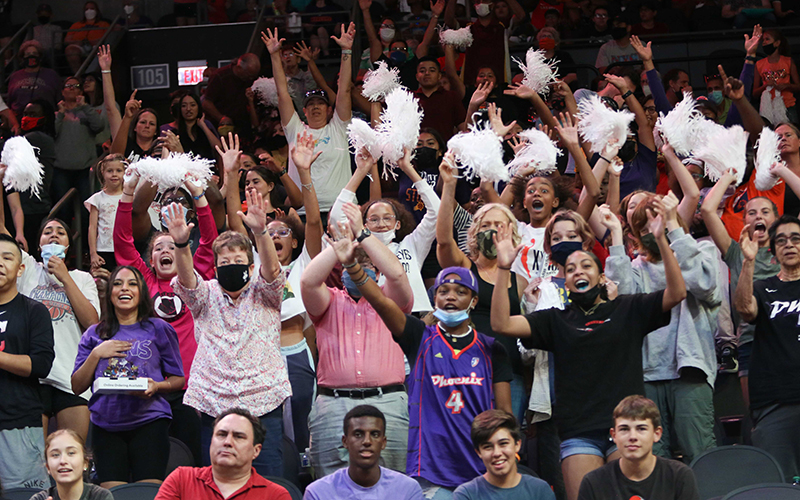 Phoenix Mercury fans will have the opportunity to watch their team play at Footprint Center for a key playoff game against the Las Vegas Aces. (Photo by Harrison Zhang/Cronkite News)

The Suns’ support of the Mercury is visible, and runs from the ownership and executives down to star players like Chris Paul, Devin Booker, Jae Crowder and JaVale McGee, who were all courtside at the Mercury’s win on Sunday.

Kozar added that the organization expects most, if not all, of the Suns players in attendance on Wednesday, as well as some Lakers players too.

Aside from the players, Kozar expects many fans to stick around following the Suns’ game to support the Mercury. Kozar said the organization made tickets available to Suns fans as a thank you for their support, and those tickets have “flown off the shelves.”

One group sure to be in attendance? The X- Factor, the Mercury superfan base that seems to never waver in its support. Even with the venue changes, the superfans have still made their presence felt.