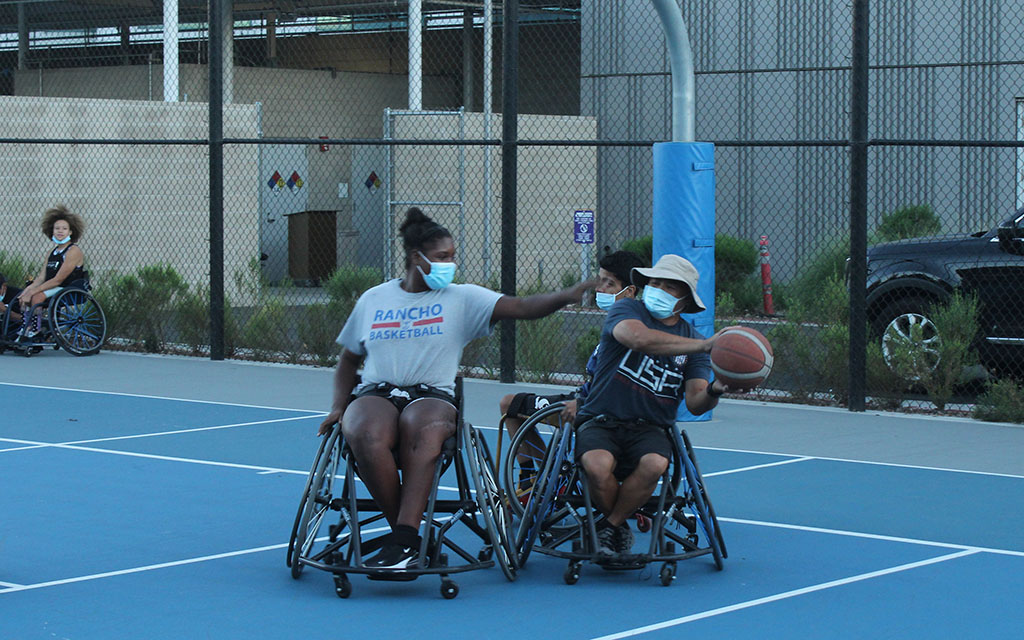 DOWNEY, California – On the basketball courts at the Rancho Los Amigos National Rehabilitation Center, the familiar sounds of shoes squeaking are replaced with wheels humming and plastic colliding. The court is home to the center’s youth wheelchair basketball team – the Rancho Halos – and when they’re not here on Monday nights, they’re often traveling the country to compete.

“It’s fun because you can make new friends and travel,” Middleton said.

Middleton was born with a disability, head coach Rick Tirambulo said. Despite her young age, she towers over her coach and her older teammates in the chair. Her play reflects that height advantage.

“It’s fun to be able to do different things and have different opportunities to travel and play tournaments against other people,” she said.

Kids who had an accident or were born with a physical disability are able to get exercise, make friends and enjoy the sport of basketball without having to pay to join the team, because they’re supported by donations from foundations like LA84, a youth sports group formed after the 1984 Olympics in LA, and Las Floristas, a female volunteer organization dedicated to helping children with special needs become independent, productive citizens. Las Floristas have partnered with the Rancho Los Amigos National Rehabilitation Center for about 50 years.

The Halos practice on courts at Rancho, which is a 158-bed rehabilitation hospital where patients are treated for spinal cord injury, brain injury, stroke, or other neurological disorders. The Rancho Los Amigos Foundation is a separate nonprofit organization that works with Los Angeles County to fundraise for the rehabilitation center. 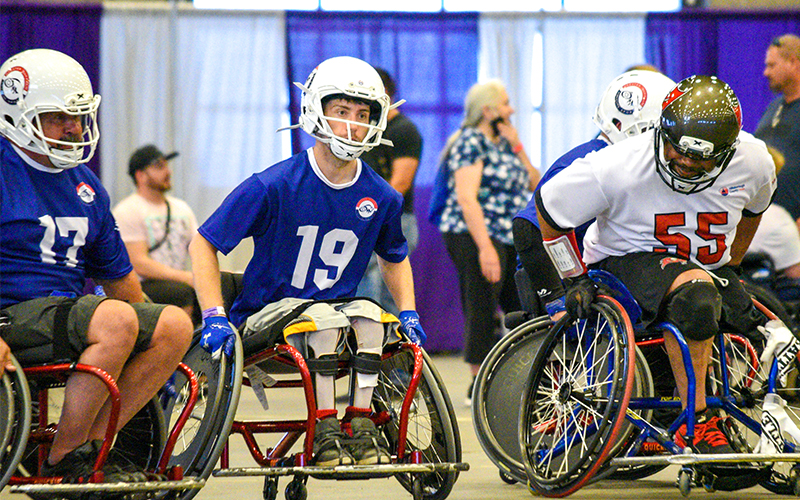 “When you’ve had a life altering injury or illness, your world is rocked, and you’ve got to figure out your new normal,” said Deborah Arroyo, the foundation’s executive director.

The kids can find their new normal with the support of understanding peers, health specialists and adult mentors who coach or are on the adult team.

“There are colleges coming to these tournaments and recruiting them,” said Tiffany Yonemoto, a recreation therapist at the hospital. “Some of the kids are getting full rides to play on different universities’ (basketball teams). A lot of our players graduate college with a bachelor’s and then compete overseas” professionally.

The college recruitment follows normal National Collegiate Athletic Association rules. Most of the schools with Division I programs for wheelchair basketball are in the East and Midwest. The University of Arizona has a team, but players are not required to attend the university.

For Alessandro Pintoi, playing in college, any college, is what this opportunity is all about.

“This is what I want to do,” said Pintoi, who’s a big Los Angeles Lakers fan. “I want to play wheelchair basketball through college, whatever college I can go to.”

Coaching kids is a passion for Tirambulo, but helping them get into college or figure out their lives outside of school is his favorite part.

“Basketball is fun, but the college education and experience is more important for them to see,” Tirambulo said. “It is a stepping stone, it is all about getting their lives together.”

After college, players can move on to the International Wheelchair Basketball Federation, which is the sole authority in global wheelchair basketball, according to the International Paralympic Committee. The IWBF and the IPC have produced such players as Paralympic gold medalist Patrick Anderson, who many consider to be the greatest wheelchair basketball player, a role model who has proven to countless younger players that they can still accomplish their athletic goals.

After playing internationally, many players have come back to the Rancho program to play for the adult team and mentor the younger kids.

“They want to give back to the program that changed their life when they were little kids,” Yonemoto said. “They want to come back to be a part of the Rancho family again.”

Yonemoto directs the basketball program. She works with the coaches, books flights and hotels, coordinates with the foundation, helps kids apply for grants to pay for basketball wheelchairs and a bevy of other tasks and responsibilities.

Yonemoto wishes to see the Rancho facilities expand, and her “dream” would be to model it after Ability 360 in Phoenix, a non-profit group that provides programs to improve the lives of individuals with disabilities. They have similar programs to Rancho and just recently held a wheelchair football tournament.

Tirambulo – an 8th grade science teacher at Saint Cyprian catholic school by day and coach of the Rancho Halos by night – has coached at Rancho for almost 30 years. He started coaching in college, and he jumped at the opportunity to work more with the team after he graduated.

“I just absolutely love coaching here,” Tirambulo said. “If I can change (the kids’) lives, if I can help them move on with their lives, that’s what it’s all about. I love being a part of their lives and coaching them.”

Luci Castillo, who also does several sports on top of basketball, including surfing and skating, started at Rancho when she was 5. Now 14 and a sharpshooter on the hardwood, she appreciates the basketball knowledge and technique she learned under coach Tirambulo.

Each kid joins at a different time and plays for a different reason, but they all leave with the same support staff, friendships and basketball skills.

“It’s a great partnership, we’re grateful for LA84,” Arroyo said. “They continue to support youth athletics in (Los Angeles) county and in Southern California, and we’re certainly grateful that they wanted to partner with us to support our pediatric wheelchair basketball program.”