PHOENIX – Looks can be deceiving. Take, for instance, the end of the Mercury’s regular season. After a bumpy 9-10 start, the team returned from the Olympic break in August and ripped off an impressive 10-game winning streak.

But now, having lost their last three games – each against teams who rank above the Mercury in the standings – the team looks to be in a rut and losing momentum.

This could not be further from the truth. While the three-game losing streak was not the most ideal way to end the regular season, it has done little to diminish the team’s confidence as it heads toward tonight’s first-round matchup of the 2021 WNBA Playoffs. The Mercury host the New York Liberty at Grand Canyon University Arena in a single-elimination Round 1 game.

It’s not the coveted bye the Mercury wanted, and it won’t be played on their usual home court in downtown Phoenix because of a scheduling conflict. But after a rigorous, emotionally-taxing final week of the regular season, it will do fine.

“It feels great,” said guard Shey Peddy, speaking after the team’s shootaround on Monday. “Everybody’s energy today was spot on, we had a good workout, we’re communicating. I think everybody knows that it is ‘win or go home’ for us … as long as we play our game, offensively and defensively, we’ll be fine.”

The Mercury returned from the Olympic break with a physically and mentally rejuvenated squad. Brittney Griner, Diana Taurasi and Skyler Diggins-Smith returned from Japan with new gold medals for Team USA, while Alanna Smith and Kia Nurse performed well for Australia and Canada, their respective nations. While mired in the standings at 9-10, the team’s mantra in those first days back to practice was simple: Let’s get down to business.

“When we came back from the break, there was an understanding of, ‘This was all the games we have left (13), and we wanna make a big run here,” Nurse said.

Beginning with a three-game homestand in six days, the Mercury started well with victories over the Atlanta Dream, Indiana Fever and Washington Mystics. Griner won her third Western Conference Player of the Week award of the season with two double-doubles over the homestand. The schedule only got more difficult, as six of the next seven games were on the road.

But behind the power of their three gold medalists, the Mercury breezed through the first three road games in Atlanta and New York. This time, it was Diggins-Smith who earned Player of the Week honors for dropping 27 points in both games against the Liberty. Missing Griner for the second game, the team needed Diggins-Smith to be as aggressive as ever and the five-time All-Star delivered, earning and converting 11 free throw attempts. 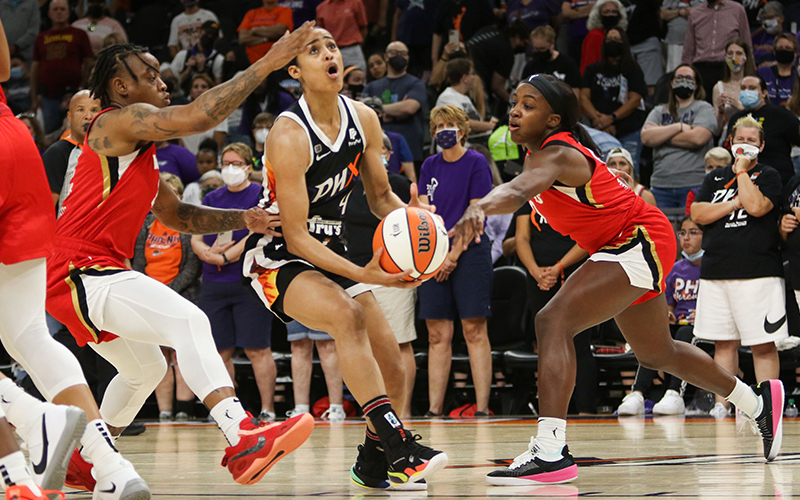 Despite playing in a different venue, the Mercury’s Skyler Diggins-Smith believes the team will have the support of the fans. (Photo by Harrison Zhang/Cronkite News)

The Mercury made a short return home to face Chicago and Diggins-Smith turned in one of her best performances in the purple and orange, with 20 points, 8 rebounds and 10 assists as they cruised past the Sky, 103-83. While the team clinched a playoff spot on the night of their seventh win in a row, the players understood that this was no time for celebration. With the prospect of bypassing the first elimination round, securing the fourth seed was the next mark.

“Obviously we wanna, at least, try and get a bye,” forward Brianna Turner said. “Since I’ve been here, we haven’t gotten a bye yet, the past two years, so obviously that is a goal.”

Back on the road for the next three games, Griner dominated in both contests in Indiana, posting 22 points the first night and 21 points the second, with 10 boards as well. The performance earned her another Player of the Week award, her fourth of the season, but the Indiana trip was special for another reason. Bria Hartley, who had missed the whole season and last year’s playoffs with a torn ACL, made her season debut and now, for the first time all season, the team had a clean bill of health.

Unfortunately for the Mercury, this would not become the new norm. Griner and Taurasi both sat out the next game in Atlanta. Having missed 12 of the team’s 19 games in the first half of the season, Taurasi’s absence alarmed Mercury fans for good reason.

The Mercury still beat Atlanta, with Peddy leading the way with 18 points off the bench and scoring the game-winning free throws with 3.8 seconds left. At 10 wins in a row, with only three games left in the season and Griner returning, the Mercury left Atlanta confident they could maintain the fourth seed.

Alas, the winning streak came to an end as the Mercury lost to Connecticut, 76-67. While Griner starred in her return with 25 points and 12 rebounds, Taurasi’s absence was felt against the top team in the league.

“I think with Diana’s leadership and her passing ability, her vision, I think it definitely would have helped us,” coach Sandy Brondello said.

Heading to Seattle for their second-to-last game, it was a battle for the No. 4 seed as the winner would secure that coveted bye. But despite missing their own gold medalist in Breanna Stewart, the Storm came away with the 85-76 victory behind 37 points from Jewell Lloyd.

So with little to play for in the Mercury’s final game of the regular season, Las Vegas pulled out an 84-83 victory to close out its season on a positive note. As for the Mercury, despite losing three games in a row to playoff rivals, and being without Taurasi for the last four games, there is not much sense of panic.

“We know that we can beat anyone, even though we haven’t beat (everyone), we just got to get there,” Brondello said. “But we’re not looking any further than that game on Thursday.

So while they could not push the streak into the playoffs and get that first-round bye, the Mercury’s progress has instilled in them the confidence that they have what it takes to take on any and all challengers. The performances from Griner and Diggins-Smith on both sides of the court, the continued dominance of Turner defensively, and the return of Hartley and Taurasi, who is expected to play tonight according to Brondello – all of these factors illustrate how the team has come together at the right time.

The Liberty, however, have genuinely stumbled backward into the playoffs. They went 2-8 in their last 10 games, punching their playoff ticket on the last day of the regular season following losses from both the Mystics and the Sparks. But with the star-power of Betnijah Laney, Sabrina Ionescu, and the newly-minted Eastern Conference Player of the Week, Natasha Howard, the Liberty will present a strong challenge for the Mercury.

Before the matchup had even been confirmed, the Mercury were faced with an unfortunately common problem for them: the Footprint Center, the team’s home, was unavailable on Sept. 23, the night Colombian singer-songwriter Maluma is scheduled to perform. 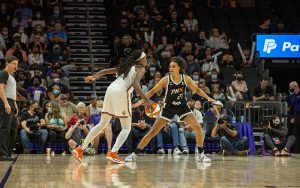 The Mercury have played in the first round of each postseason since the current format was implemented before the 2016 season. And in both of the years prior that the Mercury hosted a first round game, they had to change venues both times as well, playing the games at Arizona State’s basketball stadium, Desert Financial Arena.

The Mercury fans, or the “X-Factor” as they are so lovingly called by the team, came through on both occasions. They provided the team with the boost they needed, as the Mercury went 2-0 at home in these first-round elimination games and 7-2 overall.

But with ASU hosting a women’s volleyball match tonight, the single-elimination game between the Liberty and the Mercury was moved to the GCU Arena, with tip-off set shortly after 7:00 p.m. on ESPN2.

When asked about the prospect of playing in this new environment, Diggins-Smith made clear that the team knows the fans have their back. As a member of the Dallas Wings team that lost to the Mercury in 2018, she remembers the experience all too well.

“Phoenix fans still travel very well, so we hopin’ that even though the game isn’t (at the Footprint Arena), that the passion from our fans, everybody that wants to come to the game can still get to the game, and we accommodate them to make sure this environment is rockin’,” Diggins-Smith said.

For some players, the prospect of the new environment has little effect.

“All I need is two hoops, a center court and some lines, a ref, and two teams. That’s all you need to play basketball,” Nurse said. “Wherever it is, it is. It’s a playoff game.”

It has been seven years since Mercury won their third championship. Only Griner, Taurasi, and coach Brondello remain from that championship roster. But with the confidence found through this season’s ups and downs, the Mercury are ready to take on the challenge of adding another trophy to their cabinet.